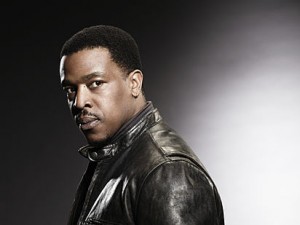 Russell Hornsby is co-starring in NBC’s new series “Grimm”. Russell is playing David Giuntoli’s partner in the show. Media Mikes had a chance to chat with Russell about the new show and what we can expect from his character this season.

Mike Gencarelli: Can you give us some background on how you got involved with “Grimm”?
Russell Hornsby: I auditioned for the role during pilot season. There were about twenty scripts that I auditioned for during that time. There were about five of those roles that I really wanted and “Grimm” happened to be one of them. I loved the concept of the show as well as the characters. I also felt there was a lot of room for my character to grow. I felt the idea of the show was something the fans could really take to.

MG: How has it been working alongside David Giuntoli?
RH: I am the guy who is in the real world. David and I are just partners working together to solve crimes. For my character it’s a real procedural world. I look at David’s character and realize he is special but I have no idea of the powers he has.

MG: Are we going to see your character Hank get involved with the supernatural side?
RH: I think possibly indirectly. I feel for the show to be believable we have to believe Hank is really entrenched in his job and has no clue about what David’s character is going through.  I also think that’s the hard part for the writers. The questions is: “How do you create that and keep both of our characters on separate sides of the line?”

MG: What can we expect from season 1?
RH: I think we can expect seeing that this world has criminals obviously. However they have this alter ego. It’s kind of like the arcade video game “Altered Beast”. These people can change into all these different creatures but what it is at its core is it’s the human condition. We are both good and bad. David’s character is able to see people for who they really are.

MG: How has the production process been for you so far?
RH: It’s been difficult. There have been a lot of long hours. We are sometimes shooting 14-15 hrs a day. But the reality of it is don’t get into the game if you don’t want to play. We are here to work and put the best product on the screen. The most important thing is that we got what is needed and it looks good.

MG: Do you have a favorite episode that you have shot so far?
RH: They all are special. I think we are delving into a world and genre that people haven’t seen. The show is going to be suspenseful. I think each show gets better and better.

MG: How many episodes have you shot thus far?
RH: We have shot seven episodes so far and I go in tonight to shoot our 8th.