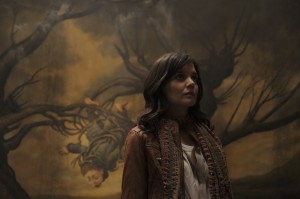 Filmmaker Guillermo del Toro describes the 1973 “made for television” film “Don’t Be Afraid of the Dark” as the scariest movie ever made for that medium. While my first choice would actually be “Trilogy of Terror,” it was pretty scary to my 13-year old mind. del Toro is the producer behind the new version of the Kim Darby/Jim Hutton (Tim’s dad) scare-fest and, while it has a few good moments, it’s another unnecessary new film based on an old film.

In a quiet part of Rhode Island, little Sally (Madison) has been sent by her mother to live with her dad, Alex (Pearce) and his girlfriend Kim (Holmes). Unhappy with the move, Sally is a brooding child. When she spies a broach that Kim is wearing Kim tells her, “my mother gave it to me.” “My mom gave ME to my dad,” Sally replies. She is also unhappy about the house, an old mansion that we’re introduced to in a prologue that makes the “is it safe?” scene in “Marathon Man” look like fun. While exploring the grounds Sally discovers a hidden basement. What she finds inside will make you think twice before you look for a quarter under your pillow.

With one seventeen-minute short film on his resume’, Troy Nixey certainly seems like an odd choice to direct a feature horror film. The film moves well but it’s obvious that Nixey (as well as screenwriters del Toro and Matthew Robbins) have been influenced by what they’ve seen before, including “Poltergeist,” “Gremlins,” “The Amityville Horror” and del Toro’s own “Pan’s Labyrinth.” Though there is some blood and violence, the majority of the scares depend on how they are set up. I can put a camera over someone’s shoulder, play the music loud and, when I feel like it, throw a cat up on screen to make everybody jump. There are no flying cats, thank goodness, but a lot of the scares are basically Horror Movie 101. I would LOVE to have seen what del Toro would do with it.

The cast tries it’s best to convey the terror. As little Sally, Madison appears to be in full “Damien” mode at first. Quiet and brooding, she begins to try to make friends with the creatures that live in the basement and want her to be their friend. Holmes is strong as the young woman not prepared to be a mother, even in a temporary roll. Pearce, looking creepily like a young Mark Wahlberg or Scott Glenn, circa “Urban Cowboy,” is also strong as his Alex must first battle with Sally’s mood then the eventual creatures that she encourages with her action. The visual effects, by effects maestros Greg Nicotero and Howard Berger, are a little jumpy, with the creatures resembling Salacious Crumb, the little guy that sat on Jabba the Hutts’ lap in “Return of the Jedi.”

“That place is unsafe for children,” a local handyman repeatedly tells Alex and Kim about the basement. Unsafe? I guess so. But, with the exception of a few scares, there’s really no reason to be afraid of the dark. I wasn’t.