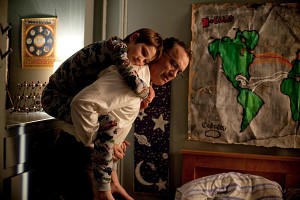 Oskar Schell got out of school early that day. He went home and saw several messages on the family answering machine. Turning on the television he is puzzled by the images of the burning buildings on screen. It was Tuesday, September 11, 2001. To Oskar, it was “the worst day.”

Featuring the greatest performance by a young actor since Haley Joel Osment saw dead people in “The Sixth Sense,” “Extremely Loud and Incredibly Close” is the story of a boy whose love for his father continues to grow, even after he’s gone.

Thomas Schell (Hanks, mostly in flashbacks) is a dreamer. His father left the family when Thomas was a boy and, in spite of his dreams, Thomas became a jeweler to take care of his family. Married to Linda (Bullock), Thomas sees his dreams come true in the guise of his son, Oskar (Horn). The two have oxymoron battles (Jumbo Shrimp takes down Original Copies) and share adventures. Oskar is quiet and shy so Thomas devises what he calls “Reconnaissance Expeditions,” knowing they will get Oskar out of the house and talking to people. Currently Oskar is searching clues for the lost 6th Borough of New York, rumored to have floated away years ago. The search seems to end when Thomas dies. But when Thomas finds a mysterious key in his father’s belongings, a new search begins.

Director Daldry has made three feature films – “Billy Elliot,” “The Hours” and “The Reader.” For each of these films he has been nominated for an Academy Award. Not a bad record. His work here is truly deserving of nomination number four. The film is both exciting and heart breaking. Oskar embarks on his journeys wearing a pair of his dad’s shoes, clomping through New York City with determination. Fearing public transportation (and pretty much everything else in the world), Oskar walks the city, trying desperately to find the lock that the key opens. He explains that, were the sun to explode, those of us on earth wouldn’t know for eight minutes, because that’s how long it would take the light to travel. Oskar wants another eight minutes with Thomas and he’ll walk around the world to get them.

The film works totally thanks to the performance of young Horn, who at age 12 won $31,000 as the champion of “Kid Jeopardy.” The work is truly award worthy, though with this year’s crop of great acting performances I fear young Horn will get lost in the Oscar shuffle. Hanks and Bullock are both strong in what are really supporting roles, as are Broadway greats Viola Davis and Jeffrey Wright. Another stand out performance belongs to 82 year old Oscar winner Max Van Sydow, who plays a man known only as The Renter. Mute by choice, Van Sydow says more with his face then some actors say with their whole body, giving a wordless performance that rivals that of “The Artist’s” Jean Dujardin.