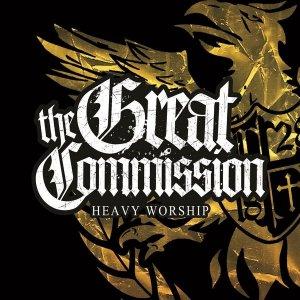 The Great Commission is a 6 piece band based out of Riverside, California. The band is made up of Justin- Vocals, Angela- Rhythm Guitar/Vocals, Robby- Lead Guitar, Victor- Guitar, Solomon- bass and Alonso on drums. The band labels themselves as a heavy worship band that blends the musical styles of hardcore, screamo and punk with Christian themed lyrical content. “Heavy Worship” is the band 3 release and is the follow up album to the bands 2009 Strike First release titled “And Every Knee Shall Bow”.

“Heavy Worship” is relentless in its approach both lyrically and musically. In my opinion the band does a great job blending scream vocals and pop punk sing along choruses which in turn make the album extremely fun to listen to. The 3 guitar attack provides a variety of heavy breakdowns which will surely conjure up the most fierce circle pits. The albums opening track “Don’t Go To Church, Be The Church” lays the foundation for later tracks such as “When It Rains It Pours” and “Draw The Line”. Even though the bands Christian themed messages may be too much for some listeners they do not over shadow the fact that “Heavy Worship” is a great album. and worth picking up no matter your thoughts or beliefs are!

The Great Commission’s “Heavy Worship” is a brutal onslaught of down tuned guitars and thick thunderous bass and drums which combined with Justin and Angela’s spot on vocals make for a really exciting album. No matter what your thoughts or beliefs are do yourself a favor and get this album! 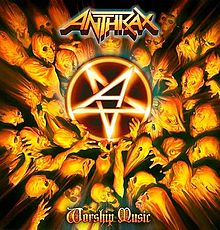 When I read that Joey Belladonna had been tapped to sing vocals on the new Anthrax album my inner thrash fan about exploded out of my chest! I like many other Anthrax fans have been waiting 20 years for Joey’s next album with the band and now its hear. “Worship Music’s” first single “Fight ‘Em Til You Can’t” kicks the album right off and is packed full of both classic and more modern Anthrax sounds. Joey Belladonnas voice is like an ageless wonder and in my opinion has never sounded better. Tracks like “The Devil You Know”, “I’m Alive” and “The Constant” were instant favorites of mine. However all 11 tracks included on “Worship Music” had great arrangements that I felt really showcased each member of the bands talent.

Anthrax’s “Worship Music” is classic Anthrax. For those hardcore Anthrax fans that have been waiting for a new album featuring Joey Belladonna your wait is over. Joey’s vocals are dead on reminiscent of the classic Anthrax albums we all grew up listening to. As a whole the band is extremely tight making “Worship Music” a great album to mosh and head bang to!