My daughter loves two things…Disney Fairies and stickers. This book should be a win-win! But I have to admit, I was really disappointed with it. She loves the sticker and character portion of it but as a consumer, the book is sold as a “Reusable Sticker Book” and there is nothing reusable about this stickers. Once these suckers are pasted down, they are down for good. Personally if something is called reusable, I would expect it to be reusable. Big let down!

There are still pages and pages of stickers included and my daughter didn’t seem to care much. There are some pages where you have a blank background and you can fill in characters and accessories. Another page includes you matching outlines with stickers. Other pages allow you to change outfits to each character but like I said once you put them down once they are stuck, so if my daughter was a little older and wanted to change something she wouldn’t be too happy here. 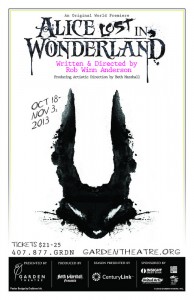 Since I moved from New York (and missing Broadway), the Garden Theatre, located in Winter Garden, FL, has been my answer to fill that void. When I saw they they were going to be presenting a darker take on Lewis Carroll’s “Alice in Wonderland”, I knew I had to see it. The play “Alice Lost in Wonderland” made its world premiere this weekend and I was left quite speechless while leaving the theatre. I am a sucker for this classic story and always jump at the chance to see it portrayed in a difference view. The story was unique and backed with very impressive performances from the cast.

Official Premise: “Alice Lost in Wonderland” uses Lewis Carroll’s classic book to inspire the story of a woman frantically searching for what she has lost. Years of falling in and out of mental institutions have broken her and now she finds herself in a terrifying situation where chances are final and journeys into dark places are both wonderful and haunting.

This show is definitely not for kids. It is quite intense and contains some very mature themes. In terms of visual, the show consisted of only one set. So there wasn’t much of a visual “wow” factor. So the weight of the show rested on our cast of performers…and luckily like I mentioned they all were very impressive. I have seen plenty of local theatre productions and you always have talent that just isn’t quite up to par. Well, not at this theatre, the performers all pulled their weight and gave great performances.

If you are drawn in like myself to see a twisted production of “Alice in Wonderland”, you should be enjoy this quite a bit. The use of light and smoke in the show is very effective and add great atmosphere. It kept my interest the whole production and had me guessing as well to where they were going to take it. I have seen plenty of shows where I lose interest, but not here. Highly recommended to catch this play during its world premiere at the Garden Theatre (just leave the kiddies at home). 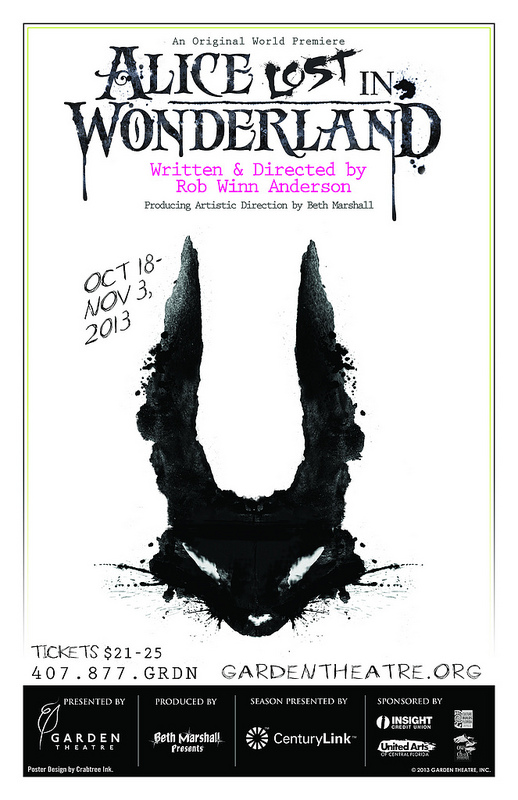 In this original world premiere, Alice Lost in Wonderland uses Lewis Carroll’s classic book to inspire the story of a woman frantically searching for what she has lost. Years of falling in and out of mental institutions have broken her and now she finds herself in a terrifying situation where chances are final and journeys into dark places are both wonderful and haunting. This whimsical psychological thriller steps out of reality and into a shattered mind to create a classically creepy and intriguingly creative journey through wonderland.

Since the Garden Theatre re-opened in 2008, there were talks about Beth Marshall Presents producing an adaptation of Alice In Wonderland, and so the idea shifted. “The concept of the show morphed into numerous forms throughout the years,” said producer Beth Marshall. “But I always knew that it would be from a strong female view point, giving the production an even darker and more adult feel. At this point the play went from being an adaptation to more of an original take.”

This play is written and directed by Rob Winn Anderson, an Orlando resident and nationally acclaimed director and playwright who’s other plays have been featured at Kennedy Center Playwrighting Intensive. Anderson is a member of the Dramatists Guild of America Inc., Chicago Dramatists, SAG, and many more.  Anderson most recently directed Neil Simon’s Biloxi Blues and his fresh take on The Wizard of Oz at the Garden Theatre last season. During Biloxi Blues, Marshall presented him with her vision of Alice Lost In Wonderland and asked if he would write and direct the show. The next six months were brainstorming ideas, sharing images, songs, writings, research. “It feels like we’ve been through a million rewrites,” says Marshall. “Now here we are in our own wonderland.”

Beth Marshall plans to get two tattoos inspired by the show. The first tattoo, which she intends to get before opening night, will be the White Rabbit mask, and right below it the line from the play, “Even nonsense has sense in it.”  The second tattoo is an original design by set designer Tom Mangieri, a playing card of The Queen of Spades, which Marshall intends to get before the show closes.

Show times are Fridays at 8pm, Saturdays at 2pm & 8pm, and Sundays at 2pm. Tickets are $25 for adults ($21 for seniors/students).  There will also be an Industry Night on Monday, October 28 at 8pm.  This show is open to the public, with $15 ticket for those in the theatre industry.  Note: This show contains mild drug and mental illness references, and mild language. For tickets, visit gardentheatre.org or call the Garden Theatre Box Office at 407-877-GRDN (4736).

Beth Marshall Presents is an independent production company based out of Orlando, Florida, producing theatrical, dance, music, multi-media performance art and all things creative in arts & entertainment with a special focus on original works and touring festival circuits. This is Beth Marshall Present’s ninth show produced at the Garden Theatre, including previous shows L’Ange Avec Les Fleurs, Our Town, Crimes of the Heart, Driving Miss Daisy, A Christmas Carol, The Diviners, Biloxi Blues, and Children of a Lesser God. Visit bethmarshallpresents.com for more information.

ABOUT THE GARDEN THEATRE

Located in the heart of historic downtown Winter Garden on Plant Street, the Garden Theatre is a not-for-profit community organization committed to enriching, engaging, and entertaining through creative experiences. The theatre, which reopened 2008, showcases an atmospheric theatre in a Mediterranean Revival style venue. The Garden Theatre hosts live plays, concerts, movies, and more to the residents of and visitors to the city of Winter Garden. For tickets or additional information, contact the Garden Theatre Box Office at 407-877-GRDN (4736) or visit the new Garden Theatre website at gardentheatre.org. 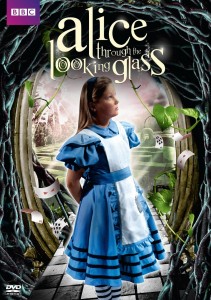 “Alice Through the Looking Glass” – Official Synopsis: Join Alice on her journey through the mirror in BBC’s fanciful adaptation of Lewis Caroll’s classic novel! In an alternate world, just on the other side of the mirror’s reflection, Alice finds herself in the middle of a life-sized chess game, where she encounters a variety of surreal scenarios and fantastical characters, including Tweedledee and Tweedledum, Humpty Dumpty, the Red Queen and others. To be crowned queen and return home, Alice must traverse all the ranks to the end of this massive chessboard-but will she make it?

“Alice In Wonderland” – Official Synopsis: This classic BBC production of the family favorite tale begins one summer afternoon as Lewis Carroll regales his picnic companions with the tale of young girl named Alice who sees a fully-dressed, talking rabbit run past her. She follows the rabbit down a hole and enters a nonsensical world where it seems the normal rules of logic do not apply. In Wonderland, Alice participates in a winnerless race, alternates between being tiny and giant, hears riddles at a “mad” tea party, plays croquet with live flamencos, and attends a trial where the Knave of Hearts is accused of stealing the Queen’s tarts. Featuring Doctor Who’s Elisabeth Sladen as the Dormouse, and filled with memorable characters and songs, this is a version the whole family is sure to enjoy.

I do not remember “Alice Through the Looking Glass” looking that incredibly cheap.  They even have scenes that don’t match up with the overlay on the characters. The production on “Alice in Wonderland” is decent improvement on “Alice Through the Looking Glass” but that could have also been the 13 years between the two. Both films are presented in full frame with a 4×3 aspect ratio.  The audio tracks included are a standard DVD stereo track, which works for the age of the films.  Wasn’t looking for a DTS Surround track here.  There are no special features includes on these DVD releases, which is a little bit disappointing overall. Nostalgia is going to determine the success of these release since  time has revealed both of their ages. 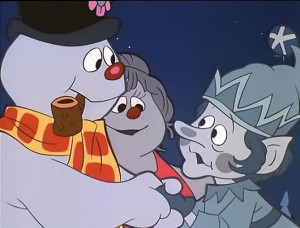 I think that the Rankin-Bass Christmas specials are honestly the best. The only special that has come close recently is Disney’s “Prep and Landing”. This film is the sequel to the 1969 special “Frosty the Snowman”. I hold the original very high as on of my favorites and this one is fun and cute but doesn’t compare. At least we get the return of Jackie Vernon voicing Frosty the Snowman. In this sequel, Frosty gets a girlfriend and also an enemy, Jack Frost. The DVD is clear and the sound is decent especially for DVD but I wish they transferred this on to Blu-ray and included more extras.

Synopsis: From beloved song to animated holiday classic: Frosty meets his match in a glistening Remastered Deluxe Edition! Andy Griffith, Shelley Winters and Jackie Vernon lend their voices to this captivating cartoon about the Snowman’s winter return to the children of a small town for a winter season of fun and games. But he?s lonely at night when left by himself. So the grateful kids build him a beautiful snowlady companion. Jealous of the attention given Frosty, Jack Frost blows up a blizzard and swipes Frosty’s magical, life-giving hat. Only true love can bring Frosty back to his old fun-loving self. Two songs that have proven to be enduring seasonal favorites highlight the soundtrack: Frosty the Snowman and Winter Wonderland.