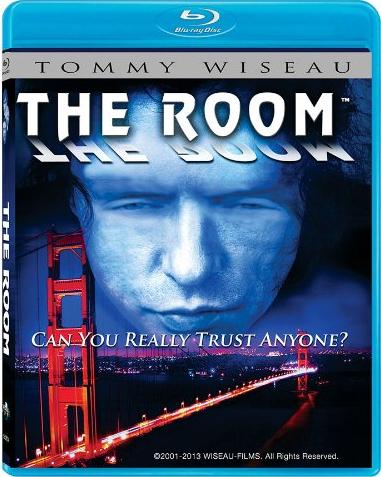 The film has been called “the Citizen Kane of bad movies” and one of the worst films ever made. Since it’s release in 2003, the film quickly developed a very large cult following and has been celebrating midnight screenings ever since then like “The Rocky Horror Picture Show”. Check out our interviews with Tommy Wiseau and Greg Sestero. Amazon lists the following information for the Blu-ray: “The Room Blu-ray will feature the first ever option of Combination Languages (CL) Combo Languages in which you can view multiple subtitles on screen simultaneously. It is the first Blu-ray format in the world. It features English, French, Spanish, Italian, German options. The Room Blu-ray has additional special features like behind the scenes footage, scene selection, trailers, deleted scenes, photo gallery and interviews.”

Official Synopsis: “The Room” is an electrifying American black comedy about love, passion, betrayal and lies. It has five major characters, Johnny, played by Tommy Wiseau is a successful banker with great respect for an dedication to the people in his life, especially his future wife Lisa. Johnny can also be a little too trusiting at times which haunts him later on. Lisa, played by Juliette Danielle, is the beautiful blonde fiance of Johnny. She has always gotten her way and will manipulate to get what she wants. She is a taker, with a double personality, and her deadly schemes lead to her own downfall. Mark, played by Greg Sestero, is a young, successful and independent best friend of Johnny. He has a good heart, but gets caught up in Lisa’s dangerous web and gives in to temptation. This eventually brings him to great loss. Claudette, played by Carolyn Minnott, is the classy, sophisticated mother of Lisa who has had disappointing relationships in her life. She wants her daughter to be married as soon as possible so she can benefit. Denny, played by Philip Haldiman, is an orphan boy, naive and confused about life, love, and friendship. Denny is a very ambitions and also very grateful tot he people who are in his life. “The Room” depicts the depths of frienships and relationships in one life and raises life’s ral and most asked question: “Can you ever really trust anyone? Enter “The Room” and leave forever changed!