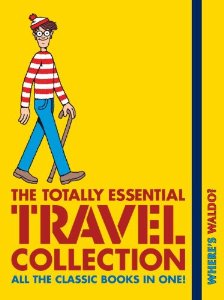 I can see this book very handy when taking long road trips with the kids. It is compact and each to pop in your page on the way out.  Martin Handford, who is the man behind these Waldo books and these books have never aged. They are still just as fun and entertaining even for the adults. I would love to see new version of Waldo in the future. Candlewick has been the company to keep this series going.

It is hard to believe but I remember getting this book right when it was released in September 1988. That is many years ago but finding Waldo isn’t any less fun. “Where’s Waldo Now?” was also just released in “Where’s Waldo Now?: The Wow Collection” but not the deluxe edition. Candlewick is the publisher that is re-releasing this book but with some anniversary goodies.

What can you expect with this said anniversary treatment? There is a striking new cover jacket. There is an original poster on the underside of the jacket. The games are expanded with a spot-the-difference game between the jacket and the self-cover designs. There is a gatefold with a new visual checklist on every spread, as well as a never-before-seen section of artwork revealed on every spread. Most importantly there is new things to search for…which means the fun continues. 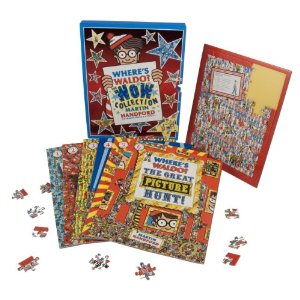 If you are a fan of “Where’s Waldo”, then this is the collection for you.  This “Wow Collection” comes with six amazing books with an eighty-piece Where’s Waldo? jigsaw puzzle included, all within a very sharp slipcase. This the complete collection and everything that any fan would go nuts over.  Get ready to spend spend hours of eye-watering fun trying to find the world’s most clever hiding man. I am looking forward this to introducing this series to my daughter.

I have been a fan of “Where’s Waldo?” from day one! This year the man who loves to hide is celebrating his twenty-fifth year. Waldo is bringing the holiday spirit in with this new sticker book. It is fun for kids but obviously doesn’t have much reply once the stickers are used. I was really hoping for a book of all puzzles and less stickers…but hey! kids love stickers! For $6.99, this is a no-brainer for kids.

“Santa Spectacular” gets Waldo’s world all decked out for Christmas! There are snowmen, skis, toys, and much more from Waldo’s previous adventures all combined with unique new artwork to create a hide-and-seek holiday extravaganza. That’s right you are creating the hide-and-seek, this time around.  There are hundreds of stickers  inviting readers to create their own winter wonderland for Waldo. Martin Handford is the man behind the Waldo books since the beginning, so expect the treatment here.