“Trouble Boys” is the first definitive biography of one of the last great rock ‘n’ rolls bands of the twentieth century: The Replacements. With the participation of the group’s key members including reclusive singer-songwriter Paul Westerberg and bassist Tommy Stinson- Author Bob Mehr is able to tell the real story. Additionally based on interviews conducted with family, friends, managers and musical colleagues, Mehr paints a deeply intimate portrait of the band. Far more than a conventional band bio, “Trouble Boys” is heartbreakingly tragic, frequently comic and ultimately a triumphant tale.

Right away I was interested in picking up this book and learning more about a band I was fairly late to discover in my music listening exploits. The Replacements were always a band I saw cited as an influence of some of my favorite artists however I had limited knowledge of the actual group aside from guitarist Paul Westerberg. As a cautionary mention before I go too far do yourself a favor and brush up on your Replacements knowledge prior to diving into this book’s immense 520 pages. Time and time again the author sites numerous names, events and locations both big and small all throughout the book and with limited knowledge of the bands career the reader can easily become lost. At several points during my reading I found myself having to go back over sections to find where the book was at as the story of just the band and its members is easily lost amidst miniscule details that were explained in far more detail than they probably needed to be leaving me to seriously question the books editing.

What “Trouble Boys: The True Story of the Replacements” lacks in being clear and concise makes up for the shortcoming in content as I stated before the book is very detailed. The addition of 32 pages of photos was also a very cool addition. Hardcore Replacements fans will already have this book on their radar but more casual listeners may also want to take notice as this book will be a welcome addition to any music fans reading library. 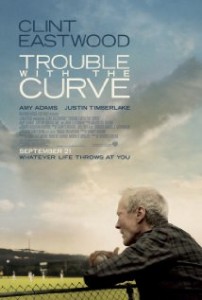 If you don’t count his spot-on impression of Grandpa Simpson at this past months’ Republican National Convention, it’s been four years since Clint Eastwood has appeared on screen. It’s also been almost twenty years since he worked for another director besides himself. What could have brought Clint back for this amazing twin surprise? Loyalty. Director Lorenz has worked for Eastwood for almost two decades, serving as everything from assistant director to producer. Now, with “Trouble with the Curve,” he gets to show Eastwood everything he’s learned.

Gus Lobel (Eastwood) is a baseball scout. Though we’re told he’s signed every great Atlanta Brave from Rico Carty to Dale Murphy to Chipper Jones, we’re also aware that he’s much older than the other scouts he sits with as he travels North Carolina watching high school baseball and looking for the next great player. Gus is baseball through and though. He continues to speak with his late wife during visits to the cemetery (her head stone reads: “May the Lord Grant You Extra Innings.” His daughter (Adams) is a lawyer with the first name of Mickey. As in Mantle. Gus realizes that his eyesight is getting worse and, upon the request of the Braves, finds himself watching THE NEXT BIG THING with Mickey at his side and a rival agent and former pitcher (Timberlake) with eyes for both the ball player and Mickey.

A great companion piece to last year’s “Moneyball,” “Trouble with the Curve” is an earnest film whose major drawback is that it’s ending is telegraphed to the audience less than 30 minutes after the film starts. That being said, if you don’t spend a lot of time analyzing things it’s an enjoyable debut project for director Lorenz, thanks in great part to a committed cast. Eastwood’s Gus could be a cousin to “Gran Torino” senior citizen Walt. Gruff on the outside but with a soft, syrupy middle, Gus is content with his life on the road. Adams shines as Mickey, who slowly resumes the love for the game her father never knew existed while at the same time juggling an important legal presentation she must present in order to make partner at her firm. Timberlake continues to do solid work as a supporting character, continually learning what makes both Gus and Mickey tick. Also notable are John Goodman as Gus’ closest front office friend, Matthew Lillard and Robert Patrick as Braves execs and George Wyner and Bob Gunton as the leaders of Mickey’s firm.

Director Lorenz obviously studied Eastwood well on previous sets. His direction is simple and fluid, concentrating more on character than action. He also manages to catch brilliant glimpses of the North Carolina countryside as well as the sounds of baseball being played for fun.