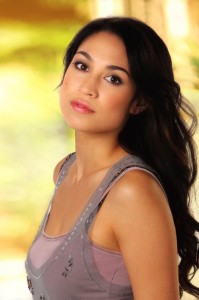 Cassie Steele plays the role of Abby Vargas in the television series “The L.A. Complex”. Media Mikes had a chance to talk with Cassie recently about the show and her upcoming music album.

Adam Lawton: What can you tell us about the show “The L.A. Complex”?
Cassie Steele: The show is about people who move down to Los Angeles to try and make it in the entertainment industry. The show follows how the characters deal with the pressures and anxieties of trying to make.

AL: Can you tell us about your role on the show?
CS: I play Abby on the show. She is a girl from Canada hoping to make it. Abby doesn’t have a lot of experience or a visa. She is struggling with how long she can stay down there and support herself without making any money. This is Abby’s first pilot season so we get to see a lot of that and the pressures pilot season can cause.

AL: Did you have any likes or dislikes about working on the series?
CS: I enjoyed meeting the new cast and crew and I loved everyone I worked with. The people at Epitome are like my family. I really learned so much and it’s been amazing to working with them. Now we get to do the second season!

AL: When does shooting for season two of the show start?
CS: I am actually in Toronto shooting as we speak. We just had a long read through of the first 7 episodes. There are some hot new characters and a lot of funny girls and boys. It was nice to meet some of the new people joining the show and, it was great to see returning cast members as well. It is very exciting.

AL: Will we see any big differences on the new season as compared to season 1?
CS: I think season 1 pushes a lot of buttons especially compared to Canadian television. Season two you will see the characters get into deeper problems. As they get move up or down the ladder you start to see what each character is capable of when they are desperate.

AL: Do you think your time on “Degrassi: The Next Generation” helped prepare you at all for your role on “The L.A. Complex”?
CS: Yeah, I guess so. I don’t think I really notice because I have done it for so long. The things other people may notice I may not. I think that it must. Everything to my knowledge went very smoothly. I think it helped me learn how to communicate with other actors. Character development is where I think it really helped me. I played the character of Manny for so long that I learned you have to play what people want to see from the character to your advantage. If you work against it things can start to work against you. I think that was a really important thing to take with me.

AL: What other projects do you have in the works?
CS: I am getting ready to release a three song teaser for my album. This release will sort of align with the CW release of my album. This is going to be a lot of fun. I am glad to have something for people to see after they watch “The L.A. Complex”. I plan to continue working on the release of my full-length album when time allows.

Brian Steele also known as CreatureBoy has played many amazing character in his career.  Some of them range from Mr. Wink & Sammael from the “Hellboy” series, the wolves in “Underworld” franchise and Berserker Predator & Falconer Predator from “Predators”. Media Mikes had a chance to chat with Brian about his various roles and his nickname.

MG: How did you get involved with creature work and given the name CreatureBoy?
BS: The nickname CreatureBoy has been with me since the early 90’s. It originated when a buddy effects artist of mine calling me it on set and the name has stuck since then. At the end of that show the crew gave me a robe with CreatureBoy embroidered on it. I still have and wear that robe! As for getting involved in creature work, well, that started in 1987. I went to an open audition for Frankenstein’s Monster at Universal Studios here in California. I was hired soon after to play the Monster in the theme park. It was a great job! Did that job for close to four years before being hired on to complete the TV show “Harry and the Hendersons”. It was while performing on this show that it became clear to me that I just couldn’t imagine doing anything else. Whatever it took to continue this path I was going to strive towards.

MG: What has been your favorite character you have portrayed?
BS: Unfair question! [laughs] Picking a favorite character would be like picking a favorite child. So, I just like to say whatever character I’m working on now is my favorite. It so much easier that way! I will say each character I have played has it’s own reason for being a favorite. “Predators” and “Terminator” because I grew up with these movies, Mr. Wink from “Hellboy II”, besides being so darn cool, he challenged me in so many new ways. Then you have the wolves in “Underworld” Franchise, Sammael from “Hellboy”, Harry from “Harry and the Hendersons” TV series. All of the characters I have portrayed are so special to me. I could go on and on about each one…the effects artists have given me some wonderful creations to wear!

MG: Tell us about working in “Predators”, how did you prepare for the role? Where you a fan of the series?
BS: I have wanted to portray a Predator ever since I saw the first movie. It’s such an iconic role. I like to say “ A Predator is the Badass of the Galaxy” who wouldn’t want to be one. Huge fan! I have spent a lot of time studying the first two films. I believe the strength of the Predator character is rooted in the performance of Kevin Peter Hall. All things Predator are built and borrowed from his performance. His performance was off the charts!

MG: “Hellboy” is one of my favorite series, how was it working on those films?
BS: There are no “Hellboy” movies without the imagination of Guillermo del Torro. Love working with Guillermo del Torro! His work ethic and attention to detail are amazing. High expectations, high demands and high rewards are the norm working on the “Hellboy” films. It’s refreshing to work with a director that uses monsters to tell and further the storyline instead, as if often the cases, using them just for scares. The characters I portrayed, Sammmael in “Hellboy” and Mr. Wink, Fragglewump, Cronie Troll and Cathedral head in “Hellboy II”, tested my mental and physical strengths. I trained like a mad man for each of these movies knowing it was going to be a grueling but rewarding shoot. It’s a special experience when everyone is completely dedicated to the task at hand, believes in the project and will leave blood to fulfill the vision of their director. That was my experience in a nutshell working on these films.

MG: Was it just a coincidence that you worked on “Predators” and “Harry and the Hendersons: TV Series”, both roles originally played by Kevin Peter Hall?
BS: I would like to think the producers knew of this connection before they asked to meet me but, I don’t think they did. It has been almost 20 years since I played Harry on the TV show, so I can understand how they wouldn’t of known.

MG: What has been your most difficult role to work on?
BS: I don’t like the word difficult ….the most challenging role was portraying Mr. Wink in “Hellboy II”. He was just so big! Bringing a personality to the surface of his emense suit while performing carrying 130 plus pounds of weight was a huge undertaking. I trained for three months with weight vests, dive belts loaded with weights, pool training, hiking, biking and gym training to prepare for the role. I have a training slogan “Make the Pain Familiar”. I continually push myself beyond where my body wants to shut down. This way I’m mentally and physically prepare to endure the demands of the role and continue to stay in character. Love my job!

MG: Tell us about the project you are currently working on?
BS: Recently I’m involved in the prep work on a Bigfoot movie called “Exists”. It’s being produced by the folks that did “The Blair Witch Project”. Its being directed by Eduardo Sanchez who Co-Directed “The Blair Witch Project”. Very excited about this project! Great to be working with my friends over at Spectral Motion on this film. They a creating and fabricating the Bigfoot. All I can say is it going to be fun to make Bigfoot a terror to be reckoned with! I’m also just launched my own clothing line called “CreatureBoy” and “Make the Pain Familiar”. Very excited to take my dedication to this genre and build a clothing line around it. Just branded our first shirts, hats and hoodies! You can check them out at creatureboy.com You can also follow me on Facebook at creatureboy or Brian Streele or on twitter @ madeamonster.