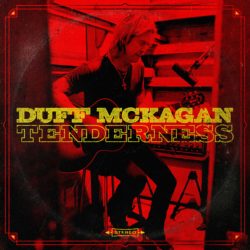 McKAGAN TEAMS WITH NON-PROFITS FOR SOCIAL CAUSE CAMPAIGN

Produced by (and featuring) recent Grammy winner Shooter Jennings, TENDERNESS (UMe) sees McKagan reflecting on his experiences traveling the globe over two and a half years on Guns N’ Roses’  Not In This Lifetime tour.  Encountering heartbreak, anger, fear, confusion and divide on his travels during this tumultuous time in our world history, McKagan channeled a collective hurt into songs of monolithic power.

On June 17th, the Seattle Mariners will celebrate the release of TENDERNESS by hosting “Duff McKagan Night” at T-Mobile Park. Package options include a ticket to see the game, a ticket to Duff’s June 16th gig at Showbox, a limited edition Mariners/Duff t-shirt, a copy of TENDERNESS and more – click HERE for additional info. McKagan’s Seattle takeover includes an instore at local music shop Easy Street Records on June 18th.

The June 16th Showbox date is part of McKagan’s North American tour, which kicked off last night in Philadelphia and will be followed by a European run that begins August 22 in Poland. All tour dates see Duff backed by Shooter Jennings and his band (see itinerary below). The shows will see McKagan bringing TENDERNESS to life, along with a few surprises.

The album, meanwhile, is getting rave reviews. Here’s what the press is saying:

“McKagan and Jennings have crafted an acoustic-Thunderous masterwork. Urgently and unflinchingly addressing the pressing issues of this bleak political era,
Tenderness is one of the most crucial and topical albums of 2019 — yet its heart-on-leather-sleeve vulnerability also makes it an instant Americana classic.”
– Lyndsey Parker, Yahoo Entertainment

“…a superb set of roots-rock ruminations…with Jennings’ help, [McKagan] crafted a mix of rock and Americana evoking both the Glimmer Twins and the Gutter Twins…”
– Sarah Rodman, Entertainment Weekly

“On Tenderness, Duff McKagan takes a hard look at some of the most important issues facing our country right now, and delivers his message with a musical vibe that’s equal parts Rolling Stones, Lou Reed, and Lies-era Guns N’ Roses.”
–  Spencer Kaufman, Consequence of Sound

“The record is miles away from the type of hard rock McKagan is known for playing with Guns N’ Roses or Velvet Revolver, or the more gritty and punky sounds he immersed himself in as a teenager in Seattle or with his own 2000s-era solo band, Loaded. Rather, these are intimate, stripped-down compositions, centered around McKagan’s strummed acoustic guitar and raw vocals, that run the gamut from the piano-based title track to the Rolling Stones–like “Chip Away,” a call to strength in the face of social and cultural injustice. Other standouts include the pedal steel–inflected “Last September,” which tells the story of an abusive relationship, and the haunting “Parkland,” which captures the dichotomous feelings of shock and numbness that characterize the American reaction to school shootings and other acts of mass violence. To be sure, these are big-picture songs that focus on topics affecting all people.”
–  Rich Bienstock, Guitar Player

“People are going to herald this as one of the best albums of the year. This is Americana-Duff McKagan. It’s not what you expect.”
– Larry Flick, SiriusXM radio host

McKagan has created a campaign that puts the album’s themes into action and he’s inviting fans to join him in an effort to give support to organizations doing great work. Those include Seattle’s Union Gospel Mission, 320 Changes Direction, and To Write Love on Her Arms, among others. For more information, please visitpropeller.la/duff.