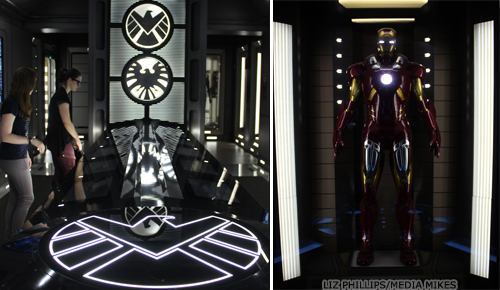 Photos by Liz Phillips
Note: There are spoilers for Captain America: The Winter Soldier within this article.

For New York City-bound Avengers fans looking to bridge the Marvel Cinematic Universe gap between April’s Captain America: The Winter Soldier and August’s Guardians of the Galaxy, they needn’t look any further than Discovery Times Square’s Avengers S.T.A.T.I.O.N. Located in the heart of midtown, the exhibit replicates an actual SHIELD base with state of the art interactive exhibits and Marvel artifacts. We got the chance to tour this unique experience during its preview period in late May and were glad to return last week to see its completion and test whether we were worthy of our newly-issued SHIELD ID cards.

Upon entry into the exhibit, “probationary” level agents are scanned and welcomed with an official message from none other than Agent Felix Blake (Titus Welliver). After Blake’s message, the entry room gives way into the further secret headquarters of S.H.I.E.L.D. It should be noted for anyone reading this in confusion in light of what occurred in The Winter Soldier that this exhibit hails directly from Phase 1 in the MCU timeline, right after the events of the Avengers. Though it begs the question: How awesome would a HYDRA station be? Bring on the digitized Dr. Zola and his databanks brain, Marvel! But I digress.

After briefing, each Avenger gets highlighted starting with beautiful costume displays of the SHIELD agents Black Widow and Hawkeye (even if the mannequin’s arms don’t hold a candle to Mr. Renner’s). Beside them are the suits of SHIELD higher-ups Agent Phil Coulson and Director Nick Fury. Like most all of the props on view throughout the exhibit, the costumes are accompanied by touch screens giving in-depth info on the items on display. Other noteable props we encountered on our tour included Loki’s infamous helmet and scepter, the Tesseract portal device and of course, Captain America’s iconic shield.

What makes this exhibit special however, beyond its wealth of actual props and costumes, is that ID everyone was issued. As the station’s staff move recruits from the designated rooms of Captain America, The Hulk, Thor and Iron Man, would-be agents can scan into interactive exercises that test their skills versus the Avengers. Spoiler alert: None of us are stronger than Steve Rogers. It also allows users to share some of their results with Facebook if they chose to connect with the social network upon registering their ID.

Unsurprisingly, the most interactive room is that of Tony Stark himself where visitors can watch themselves get suited up on screen and maneuver Iron Man in his virtual garage or operate an actual robotic arm.*

The largest space belongs to Thor, whose costume from the first film is cleverly displayed as a gift from Asgard to Midgard. Beside it, S.T.A.T.I.O.N. boasts apparently the largest holographic projection in North America, that of Thor’s legendary hammer, Mjolnir. Across from these artifacts, agents can virtually manuever through stars in a program the center developed in collaboration with NASA. Jane Foster would be proud.

Marvel’s Avengers S.T.A.T.I.O.N.  at Discovery Times Square is now open and you can find ticketing information on their official website.

(Special thanks to Heather for being our model agent!)

*Our team discovered an amusing Easter egg in regards to this arm, clearly the exhibitors know their NYC audience! Head on over to our TUMBLR page to enjoy our short video as well as additional photos from the exhibit.

Nearly one hundred days ago, New York City hosted the Road to Sochi, an event celebrating the lead up to the 22nd Winter Olympics. The event, held in Times Square, boasted several activities that fans could take part in, including an autograph signing with some members of the US team, a small luge run, and numerous trivia and sport simulations. In an area best known for its throngs of tourists, Olympic fans could even watch live sport demonstrations, including hockey, curling, skiing, and snowboarding down a ramp placed right in the middle of the square.

This Winter Olympics has seemed plagued with numerous concerns from environmental standards and potential terrorist threats to budgeting questions, lodging, and construction problems. These issues are all more than enough for one country to handle, and thatʼs not even taking into account the questions of human and animal rights violations, as well as Russiaʼs continued targeting and attacks on the LGBT community. President Obama will not be attending the Games, instead sending an Olympic delegation that is set to include three openly gay athletes. But in a lead up to the Olympics that has seen its share of controversies and concerns, the United States will place its hopes of success in its 230 athletes. 98 gold medals will be given out between February 6-23, which will include twelve new events, many previously seen in the X Games, in the hopes that their addition will add something new and fresh to the Games. Seven countries will be sending athletes to a Winter Olympics for the first time.

The United States is expected to fare well, being among the projected top countries along with Norway, Germany, and Canada. The 2014 Sochi Olympics will be shown on NBC.