*Warning: Probably Going to Offend Some People with this One

Ok, so I know I’m not the movie guy here (not trying to become one either…I like my little corner of the website here talking about comics and games), but I feel I have to take a break from my normal rantings and ravings to rage about a comic book movie issue that is driving me absolutely nuts (we’ll get back to the second half of my take on the independent comics reigning supreme over the current comicscape next time). All I have heard the last couple weeks is about how Guardians of the Galaxy is the best Marvel movie yet. Are you people out of your frakkin collective minds!!??!?!? Have you been fed media crack for so long that your short term memory is that completely and utterly useless??

I even went to go see it a second time, just to be sure I wasn’t the one who was hitting the bottle here (granted, I did sleep through half of it the first time, so I really did have to make sure for myself). I will admit two things and only two things, because they are the only two things that I can truly say in a positive light about Guardians of the Galaxy. #1…Groot rocked, seriously awesome, best character in the movie hands down. Vin Diesel has always been an amazing voice actor (If you haven’t seen Iron Giant, shame on you), but the fact that he was able to convey an array of emotions with only three words was incredible, while the way the character of Groot came to perceive and respond to the world around him was genius. I will give you all that. #2…the movie was fun. The problem, though, is that it was only fun in the way that every other ‘outlaw sci-fi’ movie or television show that has ever been done before was fun (Han Solo in Star Wars, Malcolm Reynolds in Firefly/Serenity, Starbuck in Battlestar Galactica etc). Thus, everyone’s ‘best Marvel movie yet’ was really just recycled, rehashed, retread special effects madness.

Also, there was SOOOOOOOOOOOOOOOOOOOOOOOOOOOOOOOOO much wrong with it!!! The villains were completely and utterly flat and unbelievable with no motivation; the plot was completely (and almost insultingly) simple (good vs evil with ultimate/infinite power looming towards utter destruction), and the characters were just plain boring and rehashed (the ‘outlaw’ leader, the defector from the other side, the vengeance-seeking bruiser…ok, I will give on one more thing, Rocket did have a couple good one-liners – “Ok, so now we’re all standing…just a bunch of jackasses standing up.” That made me laugh). And don’t even get me started on the blatant sexism (the two female characters could have easily wiped the entire cast away in mere seconds. It’s what they were created/trained to do, yet they needed the males in the movie to repeatedly save/lead them..WTF?!?!?)

And need I say it…Howard the Duck?? Howard the frakkin Duck?? How in the frak can you even take that seriously?!?!?!?

Even if there weren’t all these problems with the movie, best Marvel movie yet?? Really?? Have you all really already forgotten Winter Soldier, where S.H.E.I.L.D. collapses and Cap’s best friend comes back as the villain?? Or Thor: Dark World, where Loki just straight up stole the show? Or even Avengers, where Joss Whedon actually raised the bar on comic book movies to challenge the entire world to make them better?? Even before that, Ed Norton just destroyed it as The Hulk. Even as far back as the first Iron Man, which raised questions about the morality of war and making profits of off it when we could be using the same technology for alternate energy sources, the Marvel movies that have come before have not just been ‘fun’, they raised awareness and asked questions; they made social statements. Even the ‘non-Marvel’ Marvel movies (those not done by Marvel studios) were far and above Guardians, or have you all also forgotten X-Men: First Class and The Amazing Spider-Man?

I’m sorry if I’ve offended you, folks. Sorry if I’ve challenged the status quo, but if you actually believe that Guardians of the Galaxy is the best Marvel movie, you are a simpleton who has been easily led astray by a talking raccoon and a dancing plant. 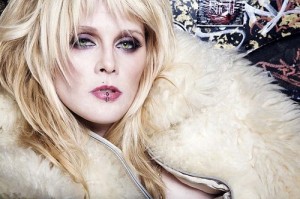 Otep Shamaya is the lead vocalist for the heavy metal band Otep. The group has just released a live CD titled “Sounds Like Armageddon” and has an album of new material set for release in the coming year. Media Mikes had a chance recently to ask Otep a few questions about the groups new live CD.

Adam Lawton: What made you decide to release a live album?
Otep Shamaya: I started this band to summon my soul into existence through the power of live performance. This album brings the raw, organic intensity of our live shows to a private performance inside the intimate universe of your mind.

AL: Was there any nervousness knowing that you would not only be performing but also recording?
OS: No, we prepare diligently for our live shows. People are always recording them in some fashion, smart phones, etc so we are accustomed to it in some way. But the truth is we give everything we have to every show, no matter where it is, how many people show up, or how we feel on that night. Every show counts. Play it like it’s your last.

AL: What made you start covering the Nirvana song “Breed” during your sets?
OS: Nirvana is one of my biggest influences. We were asked to cover a song on The Ascension, I chose BREED because I thought it was the one Nirvana song (at the time) that we could honor and do tribute to without veering too far from our sound or theirs.  It is now one of the staples of our live shows and fans go insane when they hear it.

AL: Can you tell us about your upcoming studio album?
OS: It’s a concept album based on a graphic novel I’ve been writing for two years. The book is about a girl corrupted by the world, corrugated by evil, ripped away from the golden, molten elixir of creativity, and abandoned on the placid, jagged rocks of a cruel and barbaric island where the rats poison themselves. This is a story of her personal revenge and righteousness. Her rise from the smoldering ash as a bruise that never heals transmuting, to the infinite, still-born messiah, a vigilante serial assassin, codename: HYDRA.

AL: Will there be plans to tour in support of the new album?
OS: Of course.