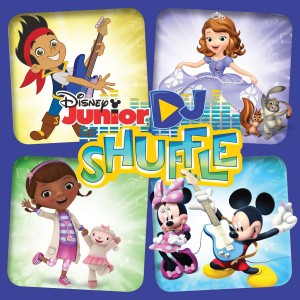 When I saw that Disney Junior was released their first compilation CD, I figured that I already had all the previously released albums and don’t really need the same songs again…but boy was I wrong! “DJ Shuffle” is a really fantastic collection of classic and (most importantly) NEW songs that have never been released before on an album. I think that Disney Junior could have gotten away with just throwing previously released songs on this album and I am sure people would have bought it. If you are a fan of Disney Junior, they I cannot recommend this album to you anymore! It has literally been on loop for the last three days and I see no signs of it slowing down.

Parry Gripp gets the album started with the title track “DJ Shuffle”. My 22 month old daughter immediately started shaking her butt during this techno track. Then we go right into one of Disney Junior’s biggest new shows “Sofia the First”. There is the theme song included along with the fan favorite “Blue Ribbon Bunny”. Then there are two new songs that haven’t been released on an album yet “Friendship is the Formula” and “Hoppin’ Out With You”. These are great and very fun songs.

Next up we go to “Jake and the Never Land Pirates”. First we get the new Swashbucklin’ Version of their theme song, which is previously unreleased. I have been really digging this new slightly more heavier opening for the show. Then we have two of my favorite songs “Roll Up the Map” and “Bubbly Blue”. There is also a brand new song “Swamp Stop”, which is also unreleased. I love the characters Sharky and Bones. There music is always such a blast to listen to and contributes so much to the show.

“Doc Stuffins” is up right after that with all new songs. There is an updated extended take on “Time for Your Check Up”. The other new songs are “Ready for Action”, “Picture You” and “Stuffy the Great”. Personally I feel that “Picture You” really doesn’t fit in with the album since it a very slow and kind of a downer after “Ready for Action” but it is still a sweet song. My daughter was dancing like an ole fool until this track and then she got bored and distracted. Luckily she was quickly grabbed again by the next show’s songs.

Of course what Disney Junior album is complete without “Mickey Mouse Clubhouse”. In fact now that they have ceased production on this series, I have that they still continue to support it with future DVD and music releases. What kid doesn’t go crazy to “Hot Dog!” “Choo Choo Boggie” is another great track from the show. Lastly there is an extended version of the “Minnie’s Bowtique” opening from the short series.

Now the next and last two of the album are the real draw for me on this album, the first is “Henry Hugglemonster”. There is the main title included, “I’ve Got Pizzazz”, “To Monsterschool” (stay in your head ALL DAY!), “The Hugglemonster Way” (one of Summer’s better songs) and lastly “Heromonsters Whoohoo!”. This show is so great and I hope to see Disney Junior releasing a solo album for this sometime this year…hint hint!

The last show included is also the newest, “Sheriff Callie’s Wild West”. This show features great music from singer Mandy Moore and Lucas Grabeel. The theme song kicks off the set followed by “Picture Perfect”, “Amazing Lucky Scarf” and “Ask for Help”. The one song I really was hoping for was “Horseshoe Peak”, which is not here. This show has so many great songs already and has only been on the air for a short time. So like “Henry Hugglemonster”, this show deserves a solo CD as well this year, no question!

Wrapping up the CD is four additional bonus karaoke instrumental tracks. They include “DJ Shuffle”, “Blue Ribbon Bunny”, “Jake and the Never Land Pirates (Swashbuckin’ Version)” and “Time for Your Checkup”. There is still more if you put the CD into the computer you will be able to access additional special content. Keep them coming Disney Junior!