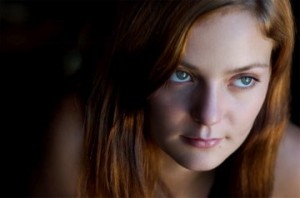 Hanna Hall is known for her roles like Young Jennie in “Forrest Gump” and Judith Myers in Rob Zombie’s “Halloween”. She also starred in the new psychological thriller “Scalene”. Media Mikes had a chance to chat with Hanna about her new film and her character.

Mike Gencarelli: How did you get involved with the film “Scalene” and playing Paige Alexander?
Hanna Hall: I got contacted by the director about doing the film. I read the script and really loved it. It also seemed like a challenge, so I was interested. I mean it is such an original idea. It was very well executed. The film really requires the strength and vision of the director and the actors to understand the nuance of the roles.

MG: How did you prepare for the character?
HH: I spent a lot of time of the psychology of the character. I just tried to pull something from my life and tried relating it to that character.

MG: Since the film is told within three different perspective, was it difficult shooting the film that way?
HH: No, from a production aspect it didn’t pose any challenges. Believe it or not it was a really fun shoot.

MG: How was it working with the amazing Margo Martindale?
HH: We had such a good time. We got to laugh a lot, which is good since most of our scenes are spent being mean to each other.

MG: Looking back on your past film work, how would you compare?
HH: When I chose a role, I like it to be a challenge or have to access a dark place in order understand an aspect of the character. So that is why I choose roles that are usual darker.

MG: Planned next you have “Visible Scars”?
HH: Yeah, that was a fun project. It is a short role, one scene in the beginning. But I get to play someone trashy which is really cool. I always enjoy working in this genre.

“Scalene” is one of those hidden gems that you find once a year. The film is very unique and original. If you are looking for a very interesting psychological thriller that will having you discussing the film long after it has ended…then this is your film. The film is also jam packed with very strong performances. Margo Martindale is just so amazing in this film, who also recently won an Emmy for her work on “Justified”. Hanna Hall also branches out and gets to shine, some might know her work from playing Young Jenny in “Forrest Gump” and from “Rob Zombie’s Halloween”. I would also like to point about the amazing job by Zack Parker, who definitely aims to add an aspect of Hitchcock in his approach. I look forward to his future efforts. Overall, this film was a real surprise and should definitely not be missed.

The story follows around around a young man named Jacob (Scarimbolo) and his mother (Martindale). Jacob was became mental disabled at age of 12 due to experimenting with drugs resulting in severe brain damage and leaving him in a childlike stage and unable to speak. His mother hires a young college student named Paige (Hall) in order to help with Jacob. Told from three points-of-view revolving around our characters and starting at the end of the story, the story revolves around rape and a mother’s subsequent revenge.

The Blu-ray presentation both looks and sounds great, which is good for the low-budget film.  Breaking Glass films definitely delivered a great release here! Hopefully this will give them the jump to release more films on Blu-ray. The special features are very impressive even though there is basically only one really extra. “PERCEIVING REALITY: The Making of SCALENE” is a very long and in-depth 3.5 hour featurette on the production. It is exclusive to the Blu-ray release and is a must watch if you enjoyed the film. Perfect companion to this great film. There is also a short featurette from Dances With Films featuring footage from the World Premiere, Q&A and Awards Ceremony. Lastly there is a two trailers including the teaser and theatrical on the disc.