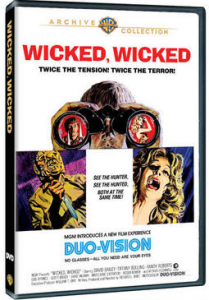 The idea for “Wicked, Wicked” is very interesting. It was presented in anamorphic “Duo-Vision” aka a fancy way to say split-screen today. I think the idea of watch the film from the eyes of the hunter and the hunted is a really neat idea. It is a mixture of horror, suspense and comedy thought, think this would have been much more effective if it kept it focused on the horror. Definitely shows it’s age but this is a still a fun time and worth checking out for sure on DVD.

Official Premise: To experience the grisly goings’on of Wicked. Wicked, your right eye has to know what your left eye is doing! Filmed in a split-screen process dubbed Duo-vision. this guilty pleasure follows a psycho electrician at an elegant California resort who prefers blondes,.,dismembered. It simultaneously follows, on the other half of the screen, the gorgeous, golden-haired guests who are unaware they’ll soon be checking out.

In order for Warner Archive to release this film on DVD, there are reports that it received an extensive two-year restoration. They are making it available as part of their Made-to-Order DVDs. It is presented in a 16×9 Letterbox with an original 2.40:1 aspect ratio and boasts a solid stereo soundtrack, which works well with the use of the organ music created for the 1925 silent classic “Phantom of the Opera”. The only special features included on this DVD is a trailer.