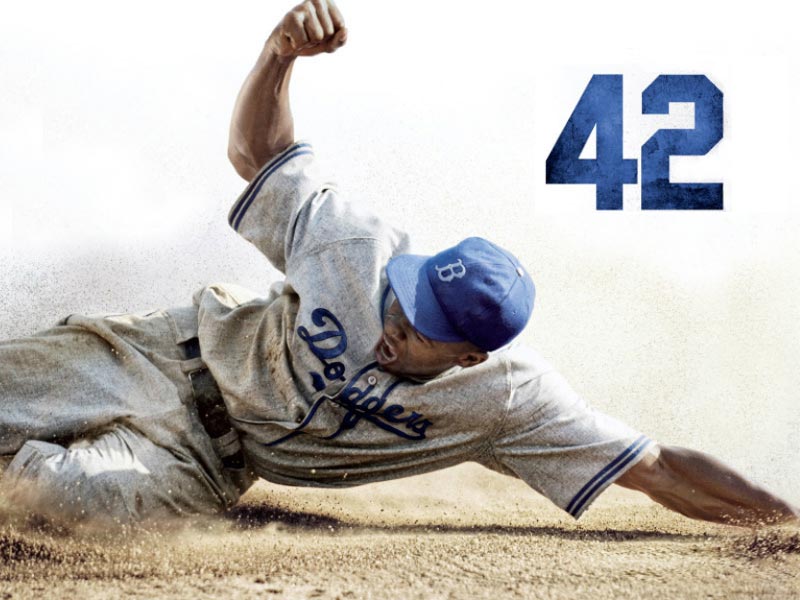 My first memory of Jackie Robinson is also one of my earliest baseball memories. Watching game 2 of the 1972 baseball World Series there was a ceremony held before the game, commemorating the 25th Anniversary of Robinson becoming the first black baseball player in the major leagues. Assuming that black players had always been around (heck, I was wearing a pair of Lou Brock model Converse sneakers that I had begged my parents for) I was surprised at the story my father told me about Robinson and his battle to play in the majors. Before signing a contract with the Brooklyn Dodgers of the National League Robinson was the shortstop for the Kansas City Monarchs in the Negro Leagues. So it was only fitting that “42,” the motion picture that honors his life, premiere in Kansas City. The event, held at the AMC Barrywoods 24 theater, gave almost 1,400 fans the first opportunity to see the new film.

The weather was as brisk as you would expect on an early April day. Dignitaries, including Kansas City mayor Sly James, mingled with past and current members of the Kansas City Royals, as well as other baseball greats from the past, including Hall of Famer Lou Brock! Also attending was Linda Paige, the daughter of Hall of Fame pitcher Satchel Paige as well as Jackie Robinson’s son, David. Bob Kendrick, the president of the Negro League Baseball Museum, which is also based in Kansas City, attended as did cast members from “42,” including Harrison Ford, Derek Phillips, Chadwick Boseman and Andre Holland.

Hall of Fame third baseman George Brett was amazed at the red carpet experience and the honoring of Jackie Robinson. “Being a baseball player also, people just assume that I know who Jackie was. But I don’t know all of the things he had to endure. It’s going to be an education for me tonight to watch this (film).” I asked Brett, who is a strong supporter of the Negro League Museum, what the benefit showing would do for the organization. “I hope it brings more awareness to it,” he said. Brett’s said his biggest regret was that Buck O’Neil, one of the best known former Negro League ballplayers, was no longer alive to enjoy this moment. Featured in the highly popular Ken Burns documentary “Baseball,” O’Neil was the first black coach in Major League baseball and a fan favorite. Brett also noted that if O’Neil were still alive tonight’s event would have been twice as big!

Best known for his work on television’s “Friday Night Lights,” Phillips talked about playing a different sport on screen. “I probably hadn’t played baseball since I was seventeen and to get the opportunity to do a film like this at thirty-five…to get out there and throw the ball around…was a great experience. We had a run-down scene that we shot in multiple angles…chasing the runner to third and back to second then back to third. It was 106 degrees in Atlanta and I got a little gassed, I’ve got to be honest.”

I asked Mayor James how important it was that this event was being held in Kansas City. “It’s huge,” he replied. “And it’s the appropriate place to have it when you think about it. But for the Negro Leagues there wouldn’t be a Jackie Robinson. The Negro Leagues started here…the Monarchs were a great team and Jackie was a part of that team. He was the person that was selected. He not only broke the color barrier in baseball but he also broke the color barrier in society. He was a high-profile African-American…something that many people in this country hadn’t seen before. He forced people to reexamine their thoughts and beliefs. The fact that it all started in Kansas City makes this event very special.”

When I spoke to Negro League Museum president Kendrick I informed him of what Brett had said about mourning the absence of Buck O’Neil. I asked him how he thought Buck would enjoy this evening’s events. “He would be so excited,” he said, letting out a laugh. “He would own the red carpet. And he would be so proud. This is such a major accomplishment for the museum. And to be connected to a project of this magnitude…one that is shedding new light on one of the greatest American heroes ever as well as shedding light on the playing ground that allowed Jackie to play. The Negro Leagues. Because we don’t get Jackie if not for the Negro Leagues. I hope this film reminds people of just how special the Negro Leagues were and how much talent was there in the Negro Leagues.”

When I spoke to actor Andre Holland, who plays famed sportswriter Wendell Smith in the film, I noted that he was pretty much the only person in the movie that doesn’t get to throw a baseball. Did he ever just wander down to the field and start playing catch? “There were a couple of times, I will not lie to you,” he replied. “I played a lot of baseball growing up and sometimes when I was sitting in the stands…between takes I’d go down, grab a bat and take a swing or toss the ball around. It was hard to be in a baseball stadium and NOT be playing baseball.”