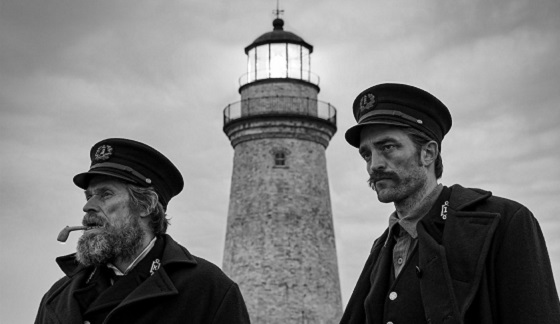 Taking place in the late 19th century, Wake, a curmudgeonly veteran of the lighthouse trade, holds on to several superstitions, which he rambles on about like its Sunday gospel. He warns his counterpart about bothering or harming the seagulls that permeate the island because the pesky seabirds house the souls of dead sailors. We also hear from him that the previous lighthouse keeper went mad, claiming to have been beckoned by the call of nearby sirens. Winslow, who’s initially suspicious of his superior and the tales he tells, finds a mermaid token stuffed into his mattress as he settles in. That seems to trigger an avalanche of bizarre happenings and sights on the miniscule space of land.

“The Lighthouse” finds a multitude of reasons for these lighthouse keepers to go inevitably go mad. Everything from cabin fever and mistrust, to the mass consumption of alcohol and the reality that their four weeks may become longer as a storm approaches. As the film progresses, it’s difficult to tell which lighthouse keeper is telling the truth, which one is hallucinating, and what exactly is happening, if anything, on the island. Dread drips throughout this film, thanks to a bombastic soundtrack and the movie being filmed in black and white. The terrors of the night and day are enhanced by the monochromatic landscape and sets.

On a technical level, this film is hauntingly gorgeous. When we see the lighthouse at night, we expect a monster to be perched on top, but instead it’s Wake, who appears to be bewitched by the light he claims to protect. When Winslow moves about the island with his work duties, whether it’s during blustery rain storms or in the dead of night, it feels lonely and isolated because all he has are his thoughts and visions. Neither have anything to attach themselves to, other than their work, especially since neither appears to have a busy work hobby, much less a book. Yet if something is on the island with them, we know that Winslow and Wake have no way to escape.

“The Lighthouse” manages to feel claustrophobic despite all the space given to these actors to play in. Despite their tiny lodging, they appear to have all the room in the world when they need to yell at or lung at one another. Dafoe, a natural in acting, seems to go through the motions at the beginning, as if he’s stretching the sea legs of his conniving character. He shines as bright as a lighthouse in the final act though, specifically in one scene I won’t reveal and another where his character delivers a chilling soliloquy. Equally impressive is Pattinson, who has the heaviest lifting throughout as his character descends into madness. The nightmarish visions and back-breaking work eventually tears down Winslow’s tough guy persona at the beginning. Pattinson channels fear and paranoia through his piercing eyes.

As evidenced by some of the more horrific or horror-centric films of 2019, “Midsommar” and “Climax” come to mind, “The Lighthouse” is a movie that you let digest. Having a gut reaction afterwards would do a disservice to the craft presented on-screen. As a reviewer, I’m in a pinch because a second viewing would solidify my overall attitude towards this film, but I do know that my initial experience was positive. Even though we’re trapped with these characters for nearly two hours, the film never feels long because it’s unnerving. Director Robert Eggers finds the right moments to be overtly creepy, violent and sexual, just like he did in his previous film, “The Witch.” There are also numerous light moments of humor that help undercut a lot of the palpable tension. “The Lighthouse” won’t make you jump or have you turning on a night light when you get home, but it may haunt your dreams like any good campfire tale of terror.

In 2011, if you had told me Robert Pattinson was an audacious talent that must be experienced; I would have called you a bold-faced liar. The “Twilight” saga tainted his image as he spent years as a twinkling in the sunlight vampire that makes constipated reactionary faces. 2017 may be the year he erases that moniker after a wonderfully low-key performance in “Lost City of Z” and now the subdued, yet enthralling performance in “Good Time.”

Constantine (Pattinson) is on the run after a botched bank robbery. His mentally challenged brother Nick (Safdie) was caught by police and isn’t handling prison life well. Morally corrupt, Constantine attempts to scrounge up bail money by duping his unaware girlfriend Corey (Leigh) into ponying up thousands of dollars with her mother’s credit card. When that doesn’t work, Constantine takes the next best route a petty thief can think of, busting his brother out himself.

“Good Time” works best without lengthy, wordy exposition because of how fast it moves. How the movie begins and ends is very telling of how Constantine should be viewed. Throughout “Good Time” Constantine looks nervous, his mind is racing through a thousand scenarios and exit plans at every turn. Midway through the film we watch him in a short amount of time work his way out of a jam with two different people, one with his words and one with his lips. His criminal odyssey doesn’t necessarily sprawl throughout the Bronx, but his manipulative impact is felt by those who encounter or get ensnared in his devious plans.

“Good Time” is very much a vehicle for Pattinson, who is a tour de force. He’s not likable, in fact you really hate him before all is said and done. But there’s this next-level intelligence at work that keeps you entertained. Much like watching Walter White weasel his way out of the grasp of fellow criminals and police through five seasons of “Breaking Bad,” watching Constantine squirm out of trouble and manipulate others through 100 minutes is much more unnerving, brisk and exhilarating.

Constantine is audaciously rotten, sometimes evil, when using others and tossing them aside when they no longer have any further use to him. There’s a moment when Constantine has to team up with another criminal, who’s much less intelligent and a lot cruder, and that when the film mixes in dark humor and entertainment. It blends well with Constantine’s self-preservation, as we watch him tout non-violence, as well as brutal violence, in the same scenario.

Lush neon light bathes the dark New York City night as the film soaks up a matching retro soundtrack from the 80’s. The visual aesthetics sometimes contradict Constantine’s depravity and corruption, but matches scenes of fleeing and fighting like any well-oiled crime-drama. “Good Time” is a gritty character piece because like most real-life criminals, Constantine is a scumbag. He’s a repulsive loser who’s gotten good at a few things, lying, cheating and scheming. We’re not supposed to root for him; we’re supposed to watch the devastation left behind in his wake.