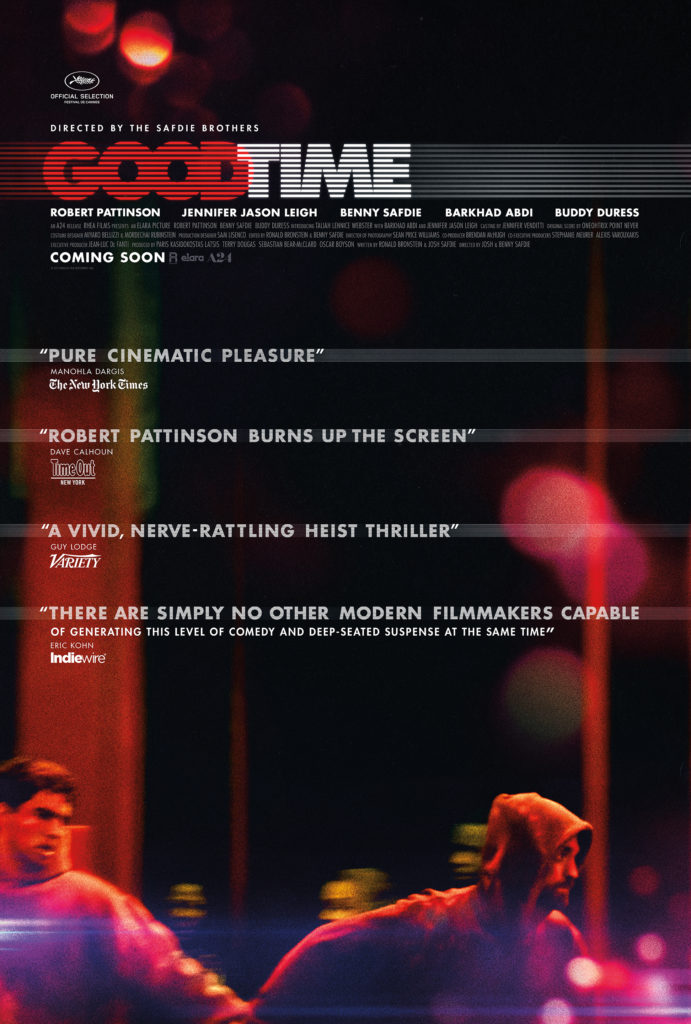 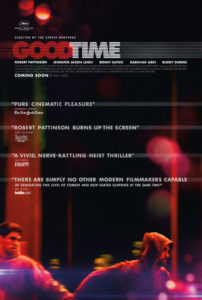 In 2011, if you had told me Robert Pattinson was an audacious talent that must be experienced; I would have called you a bold-faced liar. The “Twilight” saga tainted his image as he spent years as a twinkling in the sunlight vampire that makes constipated reactionary faces. 2017 may be the year he erases that moniker after a wonderfully low-key performance in “Lost City of Z” and now the subdued, yet enthralling performance in “Good Time.”

Constantine (Pattinson) is on the run after a botched bank robbery. His mentally challenged brother Nick (Safdie) was caught by police and isn’t handling prison life well. Morally corrupt, Constantine attempts to scrounge up bail money by duping his unaware girlfriend Corey (Leigh) into ponying up thousands of dollars with her mother’s credit card. When that doesn’t work, Constantine takes the next best route a petty thief can think of, busting his brother out himself.

“Good Time” works best without lengthy, wordy exposition because of how fast it moves. How the movie begins and ends is very telling of how Constantine should be viewed. Throughout “Good Time” Constantine looks nervous, his mind is racing through a thousand scenarios and exit plans at every turn. Midway through the film we watch him in a short amount of time work his way out of a jam with two different people, one with his words and one with his lips. His criminal odyssey doesn’t necessarily sprawl throughout the Bronx, but his manipulative impact is felt by those who encounter or get ensnared in his devious plans.

“Good Time” is very much a vehicle for Pattinson, who is a tour de force. He’s not likable, in fact you really hate him before all is said and done. But there’s this next-level intelligence at work that keeps you entertained. Much like watching Walter White weasel his way out of the grasp of fellow criminals and police through five seasons of “Breaking Bad,” watching Constantine squirm out of trouble and manipulate others through 100 minutes is much more unnerving, brisk and exhilarating.

Constantine is audaciously rotten, sometimes evil, when using others and tossing them aside when they no longer have any further use to him. There’s a moment when Constantine has to team up with another criminal, who’s much less intelligent and a lot cruder, and that when the film mixes in dark humor and entertainment. It blends well with Constantine’s self-preservation, as we watch him tout non-violence, as well as brutal violence, in the same scenario.

Lush neon light bathes the dark New York City night as the film soaks up a matching retro soundtrack from the 80’s. The visual aesthetics sometimes contradict Constantine’s depravity and corruption, but matches scenes of fleeing and fighting like any well-oiled crime-drama. “Good Time” is a gritty character piece because like most real-life criminals, Constantine is a scumbag. He’s a repulsive loser who’s gotten good at a few things, lying, cheating and scheming. We’re not supposed to root for him; we’re supposed to watch the devastation left behind in his wake.