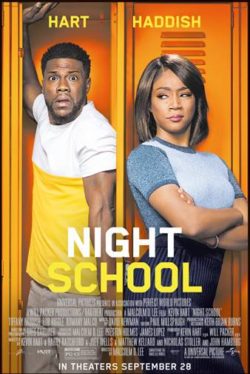 It’s difficult to digest a new Kevin Hart movie without first re-evaluating where one currently stands on the stand-up comedian turned actor. My opinion on him was actually quite positive after last year. His trademark high-pitch scream and short stature served the “Jumanji” sequel/reboot well and my prior frustrations with him melted away in “Captain Underpants.” But Hart is back to his old uninteresting shenanigans in “Night School.”

Teddy (Hart) believes he needs one thing to keep his life on track, a GED. The recently engaged man has lost his BBQ grill sales job and is hard-pressed to get an ideal replacement gig because he never completed high school. His fiancée, Lisa (Megalyn Echikunwoke), is oblivious to the fact that Teddy is a high school drop out because he’s a decent liar. Despite their years of dating, he’s managed to convince her that he’s successful, and not drowning in debt or uneducated. However she did always know he sold grills for a living.

So to keep up this charade, he gets a minimum wage job, takes the bus daily after wrecking his car, and begins to attend night school. These are all things he doesn’t tell Lisa, despite their recent engagement and step forward in their relationship. Even when she does begin to suspect something is amiss; Teddy unflinchingly goes along with her suspicion that he’s getting cold feet about their marriage. If it seems like I’m focusing too much on Teddy, that’s because this movie focuses way too much on him and his night school cohorts.

It’s a really unfortunate fact, especially consider that the other star of this film is Tiffany Haddish, who plays Teddy’s night school teacher, Carrie. Haddish, who burst into the mainstream last year with “Girl’s Trip,” has some solid quips and one liners, but is relatively declawed in this film. Carrie also represents a strong female personality that fits well into the film’s mold about overcoming adversity, but there are a lot of scenes where Carrie’s persona and approach leaves a lot to be desired.

I actually wanted to like “Night School.” It began on a solid promise that Hart, Haddish, and the surrounding cast could unearth some unexpected comedy gold. There are chuckles to be had, but not enough, mainly due to the fact that “Night School” is stretched thin by its runtime and lack of comedic imagination. Even with two comedians that have more than proven to be a comedic force behind the mic and on-screen, “Night School” gets a failing grade. 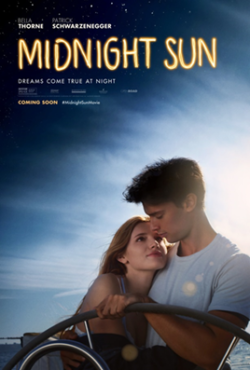 “Midnight Sun” has the makings of an eye-rolling romantic drama. Katie Price (Thorne) suffers from an incredibly rare genetic disorder that makes sunlight deadly. So she spends her days and nights trapped inside her home, pining for a life outside those confines. For years she’s been watching the cute neighbor boy, Charlie (Schwarzenegger), that she wishes she could talk to, but instead she’s only been able to communicate with her lone friend, Morgan (Quinn Shephard) and her widowed father, Jack (Riggle). It’s set-up like some predictable coming-of-age tale with a terrible “Boy in the Plastic Bubble” twist lurking on the horizon. Thankfully it doesn’t play out like that.

There’s a happy middle ground that this film finds itself in. It’s caught between the polar extremes that we’ve seen in films like “The Space Between Us” and “The Fault in Our Stars,” and it’s not a bad spot to be in. It’s able to use a lot of familiar tropes, some of them annoying, to keep the story flowing along, but it takes a lot of the stronger assets, like unpredictability and charming leads. It’s also hard to hate a movie with a lot of good intentions.

“Midnight Sun” is a movie I would generally nitpick to death, but it managed to take me out of my sardonic element. It isn’t a great love story, but it’s still a worthy entry into the teen romance genre because of its broader message on love and life. I’ll be the first to admit that this isn’t my favorite genre because of how overly sappy it usually is, but I sometimes find myself forgiving the fatal flaws because of how enjoyable the characters are to watch. And two of the main cast members in this film are surprisingly strong.

Thorne, who I’ve only seen in “Blended,” which honestly isn’t saying much, is quite magnetic as the mousey Price. Price’s disease has matured her character beyond simplistic teenage angst when it comes to the film’s conflict. Riggle, who’s known for his comedic bit parts in films and shenanigans on “Fox NFL Sunday,” legitimately shines here in a role that doesn’t require him to be overly dramatic by dipping into his real-life military experience. He’s a sympathetic father dealing with a horrific circumstance, by wearing a smile on top of his heavy heart. However, everyone else seems like a filler. Schwarzenegger, whose last name should be self-explanatory, is slightly believable in his role, but he comes off as wooden. There are also moments where he smiles and looks like the spitting image of his father, which nearly took me out of the film multiple times.

“Midnight Sun” follows some predictable beats in terms of character growth throughout the film. There’s nothing unique about the relationship that develops on-screen, but their likability is nearly off the charts. You forget about the casual, and sometimes sloppy, narration because of how much enjoyment you get out of spending time with Katie and her close inner circle. “Midnight Sun” doesn’t reach any new highs or lows, but its good enough excuse for those who want to shed a tear or feel something warm in their hearts.