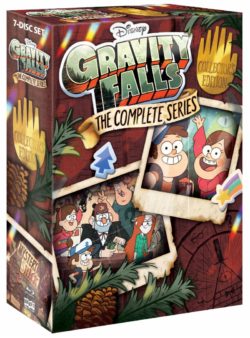 “Gravity Falls” was a brave and very different show for Disney XD. I caught an episode of this show by accident one day nearly at the end of the first season and right away I was hooked. This show had it all. It created this wonderful world with these characters. There was great mythology and planning that went behind this show. I loved how each episodes was leading to something bigger in the next. The show really engaged it’s viewer with deeper meanings and hidden Easter eggs. This show was definitely one of a kind and due to that it never really got the love it deserved. I had the chance to chat with the show’s created years ago after watching that first episode and I found, read here, out how much really went into the making of this show and I got a really appreciation for it. If you are a fan of the show, this is a must purchase for all fans! Shout! Factory doesn’t disappoint again!

Official Premise: Welcome To Gravity Falls! Twin brother and sister Dipper and Mabel Pines are sent to the small town of Gravity Falls, Oregon to spend their summer vacation with their great uncle (Grunkle) Stan. Upon arrival, Grunkle Stan enlists the siblings’ help in running The Mystery Shack, a self-owned tourist trap that overcharges unsuspecting customers. While Dipper has a hard time getting used to his new surroundings, Mabel’s upbeat optimism comes in handy in her quest to find true love. But there may be more to Gravity Falls than meets the eye as Dipper and Mabel encounter strange occurrences and weird creatures. When Dipper stumbles upon an elusive book, he discovers it is the answer to uncovering the town’s mysterious happenings. Soon, Dipper and Mabel realize they must rely on each other to navigate this unfamiliar place. Meanwhile, Grunkle Stan guards a secret of his own: one that just might hold the key to unlocking the deeper mystery that is Gravity Falls.

The Collector’s Edition will be a seven-disc Blu-ray box set that includes all 40 episodes of this show. There is also an entire disc of bonus features, including audio commentaries on all 40 episodes with series creator Alex Hirsch and members of the cast and crew…that’s right ALL 40!;. There is a new feature-length documentary “One Crazy Summer,” featuring interviews with Alex Hirsch, actors Jason Ritter and Kristen Schaal, director and storyboard artist Matt Braly, writers Jeff Rowe, Shion Takeuchi and Josh Weinstein, composer Brad Breeck and over a dozen additional members of the cast and crew. This doc is a must watch for all fans. Lastly we have a over an hour of never-before-seen deleted scenes as well as a few shorts and promos from the show’s run.

You can tell  that there was a lot of planning and love that was put into this these extras and the Blu-ray in general. The 1080p transfer of these episodes look great with the animation style and the colors. I love the palette for this show. The exterior slip cover case is a really sturdy hard stock and I  really like it. It feels like they actually delivered a solid product all around here. If you don’t have Blu-ray, there will also be a six-disc retail DVD edition that includes all 40 episodes of the series and the accompanying audio commentaries, but does not include the bonus feature disc.  Shout! has got us fan covered! Don’t miss this!