Punk rock band Good Riddance return with their 9th studio release titled “Thoughts and Prayers”. The album is being released via Fat Wreck Chords as is the follow up to the bands 2015 release “Peace in our Time”. Produced by Bill Stevenson and Jason Livermore “Thoughts and Prayers” features twelve new tracks from the Santa Cruz, CA natives.

Since the reformation of the band in 2012 Good Riddance have forged ahead with the same fast paced ferocity that cemented them as a mainstay during the pop-punk boom of the mid 1990’s. The group’s latest album “Thoughts and Prayers” is a solid example of this as it packs a solid one, two punch of fast paced rhythms and catchy melodies. Tracks like the frenzied “Rapture” and the thought provoking “Our Great Divide” combine the bands signature sound with a fresh batch of hooky choruses that will have you singing along in no time. The track “No King but Caesar” does a great job breaking up the album as it slows the momentum just enough for the listener to catch a breath only to be sucked in seconds later as the track ends up morphing in to one of the fastest, most intense songs of the release and makes way for other upbeat numbers “Who We Are”, “Pox Americana” and “Lo Que Sucede” before coming to rest with the closing rallying cries of “Requisite Catastrophes”.

When a band breaks up and then gets back together you never know if the same energy and cohesiveness that made the original incarnation of the band work will still remain. “Thoughts and Prayers” shows that Good Riddance have not lost a step but they have also kicked things up a notch with an album that showcases the bands progression as people and musicians. If 2015’s “Peace in our Time” record served as a reminder to who Good Riddance was during their heyday then “Thoughts and Prayers” is the road map for where the band is going next, 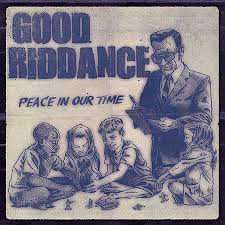 “Peace in Our Time” is the 8th studio release from the hardcore/punk band Good Riddance. This is the bands first release since reforming in 2012 and it features 14 brand new tracks produced by Bill Stevenson and is being released via Fat Wreck Chords.

Fans of edgy, pop tined punk rock look no further as Good Riddance are back with their first new album in 9 years. Titled “Peace in Our Time” the album is the first studio work the band has done together since reforming. Though fans may not have enjoyed the group’s time apart the latest offering from the Santa Cruz, CA natives is fresh and catchy while staying true to the bands original sound. Songs like “Contrition” and “Teachable Moments” feature thunderous bass and drum breakdowns which pave the way for vocalist Russ Rankin’s straight forward vocal approach while tracks like “Take It To Heart”, “Dry Season” and “Our Better Nature” blur the lines of the hardcore/punk genres with graceful ease.

From start to finish “Peace in Our Time” held my attention and made me want to get up and move. The album exudes an energy that is infectious and fun with a sound that harkens back to the mid 90’s punk glory days while still feeling fresh and new. Those looking for a punk rock album with a little bit more edge without going too far look no further than the latest from Good Riddance.