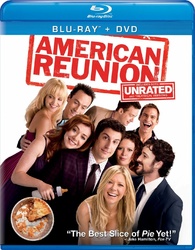 When “American Pie” came out I was still in high school just like Jim and his friends. I have grown up with these films and even have a kid myself like Jim. But “American Reunion” though is just one sequel too many. I think I had enough after the second, let alone the four (not referenced) direct-to-video spin-off/sequels. This film is just the a continuous of the same, it really doesn’t take the franchise into anything new at all or doesn’t give it any direction. There were a few decent laughs but nothing special, overall. Eugene Levy (again) was the best part of this film and should have his own movie. Also I understand they wanted to re-create the original poster with this film but Natasha Lyonne was seriously in the film for 40 seconds.

The Blu-ray edition includes two cuts of the film: a 113-minute theatrical cut and a 114-minute unrated version. So you can see that it doesn’t matter which one you watch they are basically the same, just like the last few sequels. This release comes in a combo pack with a Blu-ray disc, DVD disc and a streaming UV Digital Copy. The 1080p video resolution looks ok but nothing special and is presented in its original aspect ratio of 1.85:1. The audio track is also decent with its DTS-HD Master Audio 5.1, not really challenged.

The special features are also decent but nothing to call home about. There are two audio commentary, the first is with co-writers/co-directors Jon Hurwitz and Hayden Schlossberg, some funny moments overall. The second “Out of Control” audio track is a video commentary with Jason Biggs, Seann William Scott and other members of the cast who pop-up on screen throughout and give comments. I preferred the second one for sure though it is sometimes erratic.

Next up, there are over 40 minutes collected of deleted, extended, alternate scenes, as well as a Gag Reel (which funnier than whole movie). “The ‘Reunion’ Reunion: Re-Launching the Series” is a behind0the-scenes featurette with the cast chatting about returning. “The Best of Biggs: Hangin’ with Jason B.” is an all you can eat Jason Biggs buffet. “Lake Bake” is a location feature with the cast and crew. “Dancing with the Oz” is a look into Chris Klein dance act. “American Gonad-iators: The Fight Scene” is a feature on the films climactic fight sequence. “Jim’s Dad”, aka the best part of the film, takes a look at Eugene Levy’s character. “Ouch! My Balls!” is a behind-the-scenes with the cast planting spoof. Lastly there is an interactive yearbook with clips from the entire Pie series. 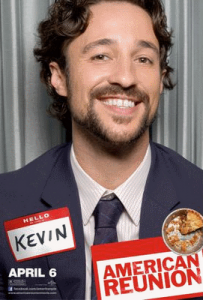 Thomas Ian Nicholas is currently appearing in the 4th film in the “American Pie” series, “American Reunion”. This film marks the complete return of the original cast from the first film. Thomas also is currently touring with his band, TNB. Media Mikes had a chance to chat with Thomas again about “American Reunion” and also his music.

Mike Gencarelli: What was it like the first day when you got to set and the entire group was there?
Thomas Ian Nichols: Filming is always like a jumbled group of actors and it’s something you don’t have any control over. The first time that we got together was prior to shooting. We did some table readings and screen tests that everyone was at. When I first walked into the room it was a trip. On one hand I had thought I matured as I am married now and had a child on the way. As soon as I walked into that room I reverted back to my youth. We started talking and during the table read it felt like no time had passed at all. It was very surreal.

MG: Was there any particular highlights for you from filming?
TIN: Each film has been subsequently more fun to make. I think each time we know each other a little more and we have history together. The first film we were kids and I was just happy to have a job. The second film was a giant party, and the third film was just a big celebration. This film being 10 years later and also the first one to be shot on location was just nuts! All the other films were shot in Los Angeles so at the end of the day we would all just go home. When you are on location you are away from your friends and family. We spent a lot of time just hanging out.

MG: Can you tell us about how your character Kevin has been up to?
TIN: I had never really considered a reunion. Jon and Hayden I think chose wisely for Kevin. He is doing what we would expect him to be doing. He has gotten married and moved on from Vickie. He has kept in touch with everybody and is working as an architect. Kevin is also a good cook and there is a line in the film about him being Jim’s favorite house wife. Kevin acts as the ring leader to bring everyone back together again.

MG: What does this film bring new to the table?
TIN: I think what it brings new is also what it brings old. Jon and Hayden are really big fans of the original film and the franchise. They really sought out to capture the heart of the first movie. When I first saw the film I thought they achieved that and so much more. I kind of consider “American Reunion” to be the perfect sequel to the first movie.

MG: Can you tell us about your song on the soundtrack?
TIN: I have tried to pitch songs to be on all of the “American Pie” films. This time I recorded a song that I knew was going to be on the soundtrack already and pitched the idea to Jon and Hayden. I ended up playing the wrap party for the film which was something I had never done before. After hearing me they asked to include one of my songs on the album. They didn’t use the cover I did of “Laid” as they chose to go with the original James version. They ended up going with an original song of mine that is off my new album titled “My Generation”.

MG: Can you tell us about the “American Reunion” college tour?
TIN: During the month of February I traveled around to 20 different colleges playing concerts and promoting the movie. I wanted to make sure that the next generation was aware of the film so I came up with this idea to spread the word.

MG: What other projects do you have planned?
TIN: My new album will be coming out so I plan to be out supporting that. As far as films “The Chicago 8” where I play Abbie Hoffman should be coming out hopefully later this year. I also have a few other projects I am working on. I am always keeping busy.

Ah, high school. So many memories. And what better way to relive those fond memories then at a reunion. The kids at East Great Falls High are getting together to celebrate their 13th year (don’t ask) out of high school. And they’ll find that those memories can make you cry as much as laugh.

Pretty much an “American Pie” retrospective, “American Reunion” gives us a look into the lives of the senior class of 1999. All of the familiar faces are there. Jim (Biggs) is married to Michelle (Alyson Hannigan). They have a two year old son and apparently no time for each other. Oz (Chris Klein) is a popular television sportscaster who is even more renowned for his appearance on a “Dancing With the Stars”-like show. Finch (Eddie Kaye Thomas) has become a world traveler. Kevin (Thomas Ian Nicholas) is a happily married stay at home husband. And Stifler (Scott)…well, Stifler is Stifler.

Written and directed by the same duo that brought us the “Harold and Kumar” films (which would make sense since Thomas, John Cho and a cameo-ing Neil Patrick Harris appear here), “American Reunion” is like one of those flashback television shows. Except here when someone says, “remember when we” there is no actual flashback. Just a lot of reminiscing. Mostly it’s about love lost. Whether it’s no time for love, not loving the one you’re with or wishing you’re first love had really been forever, love seems to be the story here. Of course there is also sex and beer and the forever-eighteen Stifler to brighten the mood. As played by Scott, Stifler is as obnoxious as ever. But you can’t help but love the guy because, whether he’s getting revenge on a couple of teen age pranksters or setting up the party of the year, you know his heart is in it.

The rest of the cast have obviously become comfortable in their roles and their comradeship is evident on screen. Klein has a few scenes that let him show some range and he handles them well. Biggs has always played hang-dog well and he does it here. Levy, as Jim’s dad, has always been a high point in the “Pie” film series. The best scenes in the film are of Jim and his pop just talking like countless fathers and sons have done in the past. Hannigan is pretty much wasted here, spending a lot of the film “visiting friends.” “American Pie” fans will be happy everyone from the first film makes an appearance, though some of them are in “blink or you’ll miss them” cameos.

The script is full of jokes capitalizing on the fact that life moves pretty fast. When Jim meets Kara, the little girl next door he used to babysit, he is shocked to see that she has grown into a full blown hottie. The fact that she refers to a Spice Girls song on the radio as “classic rock” only shocks him more. Time surely does fly, whether you’re having fun or not.