A Wrinkle in Time

Disney has had no problems taking a few risks here and there, especially since their Marvel and Star Wars properties guaranteeing the studio an easy half billion dollars (at the very least) every time one is dropped. So it’s understandable that they can make a calculated gamble or two on tricky creative properties. With “A Wrinkle in Time,” the movie studio certainly rolled the dice with a very well-known, but difficult to transcribe, story. Unfortunately, Disney has rolled snake eyes.

By no means would it be easy for anyone to take the most frequently challenged pieces of literature of the 20th century and turn it into a big budget visual delight for mainstream audiences. The book’s blending of Christian spirituality and grounded science are a complicated combination that creates a fear for movies producers when it comes to potentially upsetting several groups. Writers had to not only conjure something enlightening and mentally stimulating, but have it be void of controversial thesis statements about life. Of course if you don’t know anything about the book, you’ll be confused on how the film handled that narrative regardless.

Meg Murry’s (Reid) father, Dr. Alex Murry (Chris Pine), has been missing for several years. Many believe he simply abandoned Meg, her brother Charles (Deric McCabe), and their mom. But others believe something planetary happened because of Dr. Murry’s pursuit and interest in interdimensional travel. He had a theory about the brain being able to traverse universes and being able to move from locale to locale with the use of the mind’s focus. It’s a lot of exposition and scientific theory to take in already; it doesn’t help that “A Wrinkle in Time” quickly ushers in three astral travelers, each with a specific quirk and power.

At about the halfway mark, I began to wonder if “A Wrinkle in Time” was more concerned with telling rather than showing. I also questioned the film’s direction because at this point, I felt nothing for any of the characters on their journey. Sure Meg and Charles feel slighted by their father, who they’re ultimately searching for, but outside of those abandonment issues, there’s not much there for viewers to latch on to. It doesn’t help that much of the emotional core of the movie is derailed by having to shoehorn in a new character every five minutes.

The movie really doesn’t work until the final act, after we’ve had to suffer through a lot of confusing tone changes, half-hearted story beats and dead end CGI spectacles. I believe the final act only works because the movie finally embraces the concept of alternate realities and begins treating Meg like the adult she’s maturing into. Although it could have paid off more if we got more time with the characters being themselves instead of reciting exposition and acting wooden in the face of extraordinary circumstances.

I remember reading “A Wrinkle in Time” back in sixth grade as an assignment. It came after a class reading of “The Lion, the Witch and the Wardrobe.” My recollection of the book itself is fuzzy, but I remember having to reread an entire chapter because I felt like I had just tried to digest algebra for the first time. Disney tried to adapt “A Wrinkle in Time” back in 2003 and it was met negatively. It looks like they’ll have to try for a third time in about 15 years.

I imagine the pitch for “Home Again” was originally a sitcom. Hallie Meyers-Shyer probably pitched to a studio big wig that over a 24 episode season, the audience would be introduced to newly divorced and hard-working interior designer Alice Kinney. We’ll watch as she picks up her life, and her two kids, to move to her father’s old home in sunny L.A. She’s the daughter of a former film prodigy, whose greatest achievements weren’t the boxed up Oscars in his work room, but raising Alice. I also imagine the pitch ended with an executive saying, “Not enough content. Why not make it a movie?”

The only thing missing from “Home Again” is a canned laugh track, applause and other phony audience reactions. The 97-minute sitcom has Alice, after a drunken night at the bar, take in three young go-getters looking to make it big in Hollywood. They remind me a lot of “Entourage” and I kind of hated that show. George (Jon Rudnitsky) seems to believe he’s the next Stanley Kubrick or Walt Whitman, Harry (Pico Alexander) wants to move beyond being a bit-part actor, and Teddy (Wolff) is the “big picture” man of the group, who smooths talks people like a skeevy used car salesman.

Problems arise when Teddy swoops in on Alice like a sexual predator of women going through a midlife crisis. George becomes upset because he believes he’s entitled to some nooky with Alice because he’s the “nice guy” and he seems frustrated that he’s been friend-zoned. As for Harry, he’s slight impartial, but ends up showing his true colors when he views himself as the shining armor brought in to protect Alice and her two children like a vicious Mother bird.

“Home Again” is barely kept alive by Witherspoon’s natural likability as well as her growth throughout the movie as a woman coping with the concept of becoming a single mom. Most movies would handle her shortcomings and struggles with grace and realism that creates a humanistic bond with the audience. Instead she makes a few speeches reminiscent of “Ally McBeal” and allows for the three-men living in her home to commit “Two and a Half Men” hijinks. “Home Again” is a boring copy and paste of common television dramedys.

Like any sitcom, the character’s emotions, feelings, and misunderstandings are hashed out in a brisk verbal manner. It seems all too easy for everyone to admit their flaws, apologize and hug it out like it’s a family night around on the television. Everyone just comes together like one big dysfunctional family and forgets all their squabbles. If you want to believe in a phony universe where four men pining for Alice’s emotional and sexual affection can break bread at a table in peace, that’s fine. But the unearned sappy mentality and rushed conflict resolution in “Home Again” is lazy. 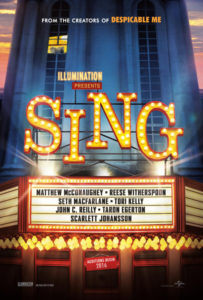 An Illumination Entertainment movie without any Minions or Gru seems like a risky venture, given their track record when they release a movie that strays away from the “Despicable Me” franchise. But if the masterminds at Illumination are willing to roll the dice more on endeavors like “Sing,” they’re bound to find a diamond in the rough. “Sing” isn’t about to blow the roof off, but its decent escapism.

Buster Moon (McConaughey) is a confident Koala that’s stuck operating a failing musical theater. He’s a visionary looking to make a profit and bring live entertainment to the surrounding city. Moon is also looking to make his deceased father proud because his father worked his tail off washing cars to buy Moon the theater for him (I don’t know how with that profession). But in a world where musical theater is apparently no longer popular, Buster gets the idea to hold a singing competition to bring the masses back to his sinking business.

The competition brings creatures from all walks of life including Rosita (Witherspoon), a pig, is a stay-at-home mom who’s overworked and overloaded with over two dozen children. Then there’s the wise-cracking, street singing mouse, Mike (MacFarlane), who’s a clear pun on Frank Sinatra during his times in the Rat Pack. Ashley (Scarlett Johansson) is a punk rock porcupine who’s trying to find her own voice in her boyfriend’s crappy band. There’s also Meena (Tori Kelly), a teenage elephant, Johnny (Taron Edgerton), a gorilla, and some other throwaway animals that you shouldn’t worry yourself about because the movie doesn’t either.

Luckily “Sing” avoids becoming an animated version of “American Idol,” but it also follows a lot of familiar beats and story tempos. Because the movie seems completely content and forthright with being an unoriginal idea from the get-go, it can be forgiven because of its good-natured spirit and endearing characters. “Sing” really treats these characters as individuals with hopes, dreams and ambitions, instead of caricatures that can carry a tune. It helps make their songs more meaningful and power…but…

…most of the time (if not all) they’re singing contemporary pop-culture hits, or recognizable oldies and classics, which is only irksome if you feel that Nicki Minaj or Crazy Town isn’t appropriate for a kid’s movie. If writer and director Garth Jennings really wanted to tell us that musical theater is deserving of a reboot or our attention again, he should have considered hiring a crew to write some original music. Having animals sing Taylor Swift or Leonard Cohen feels lazy in a year where Disney hired Broadway’s latest darling, Lin-Manuel Miranda, to write lyrics for “Moana.”

Despite its lack of storytelling imagination and original songs, “Sing” is still an adorable movie with an IPod stuck on shuffle soundtrack. It’s made better by the voice actors, who I presume actually sing, which is pretty much an all-star cast of karaoke finalists (except for MacFarlane who really is as good as he sounds). But don’t expect McConaughey to hang his voice acting hat on this one. He’s more likely to gloat about his voice work in “Kubo and the Two Strings.”