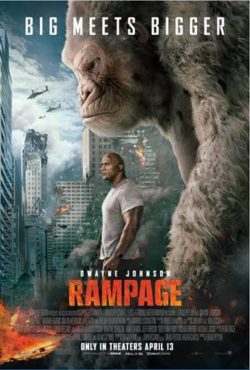 I remember several quarter eating games from my childhood. Most of them were first-person shooters like “House of the Dead” and “Carnevil” where it didn’t matter how good you were or if you were a sharpshooter, the game was designed to kill you so you’d have to keep pumping in change. Most other games that I would spend endless hours playing at the arcade were fun for a five-year-old boy to play, but inherently dumb because of its repeating pattern and repetitiveness. There were side-scrollers like “X-Men” and smash and destroy games like “Rampage.”

21st century video games are championed for interactive gameplay and in-depth storytelling. The games of the late 80’s and early 90’s could be crowned as mindless time wasters. That’s “Rampage” in a nutshell. How they made a movie out of that is genuinely impressive. One, because it should be towards the bottom of the list for potential big screen adaptations and second, there’s honestly not much to adapt other than the idea of giant monsters smashing buildings, something that’s already been done multiple times.

“Rampage” is like a melting pot of any Kaiju film, “Mighty Joe Young” and that Dwayne “The Rock” Johnson charm we’ve become accustomed to over the past decade. Johnson plays beefy anthropologist Davis Okoye, who relates more to primates than he does his human co-workers at a San Diego wildlife sanctuary. The introverted scientist can fly helicopters, has a military background, and communicates with a massive albino silverback gorilla, named George, like it’s his frat brother.

The movie quickly picks up steam when George is infected with an experimental gas. The mutating fumes are from the remnants of a company space station that was experimenting with DNA. The gas acts like a steroid to all of George’s senses, turning him into a monstrous creature overnight. He’s bigger, stronger and angrier. He’s not the only creature to get hit with a dose of plot as several other canisters of this harmful gas have landed in rural Wyoming and some Florida swamplands, infecting a wolf and crocodile.

“Rampage” is a tad too long, padding it’s runtime with a lot of unnecessary character backgrounds, silly exposition, and a quick shoehorned message about poaching. It doesn’t help that the show stopping fight between all the monsters, in downtown Chicago, feels like it takes forever to get to. The pace that it moves at feels more like a painful tease rather than an actual build-up. Johnson, like he is in most of the other sub-par films he stars in, does give an otherwise limp noodle script a bit of life.

While in 2017, we learned he’s vulnerable to a complete inadequate script (“Baywatch), 2018 seems to prove once again he can do a lot with very little. While everyone merely acts scared of the CGI monstrosity that is George, Johnson brings some warmth to a cold creature and seems to be genuinely interacting with it. Johnson, along with Jeffrey Dean Morgan and Naomie Harris, provide a likeable trio of heroes looking to save lives and the life of George. But after watching scores of service men and women die while civilians flee in terror in the final act, shouldn’t George be lumped in the same category as Superman in “Man of Steel?”

When it wants to be light-hearted, “Rampage” is quite fun, but when it wants to be dark with jump scares, and scenes of death and destruction, it’s off putting to the overall vibe the movie’s trying to establish with George and his nurturing human savior, Davis. There’s fun to be had in “Rampage” as long as you understand that this is a bad movie. But just like the old “Rampage” arcade game I played in my youth, I don’t necessarily feel like I should ever revisit this one or reflect on it as anything more than a cash grab. 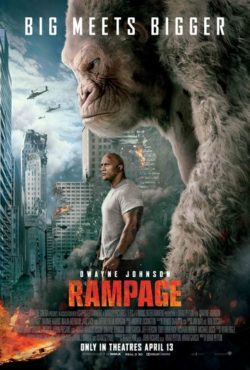 Media Mikes is proud to be hosting an advance screening of the new film “Rampage” starring Dwayne Johnson in Orlando, FL! Click below to get tickets, first come first serve! Good luck and like always leave a comment here after you’ve seen the film!

Seating is first-come, first-served and not guaranteed. Theatre is overbooked to ensure capacity.

Primatologist Davis Okoye (Johnson), a man who keeps people at a distance, shares an unshakable bond with George, the extraordinarily intelligent, silverback gorilla who has been in his care since birth.  But a rogue genetic experiment gone awry mutates this gentle ape into a raging creature of enormous size.  To make matters worse, it’s soon discovered there are other similarly altered animals.  As these newly created alpha predators tear across North America, destroying everything in their path, Okoye teams with a discredited genetic engineer to secure an antidote, fighting his way through an ever-changing battlefield, not only to halt a global catastrophe but to save the fearsome creature that was once his friend. 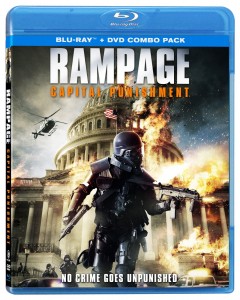 I know many people are not fans of Uwe Boll at all. There is either a love or absolutely hate when it comes to his films. I have seen them all and I am definitely a fan for sure. In 2009, he released a film called “Rampage”, which was quite awesome in fact. Brendan Fletcher was the star of that and he returns in the sequel “Rampage: Capital Punishment”, which is a decent follow-up to the first film. It is more crazy yet at the same time more subdued. Fletcher is a highlight as Bill Williamson again. It is such a cool character. Boll fans should check this out. Stand tuned for “Rampage 3” as well!

Official Premise: Violent anti hero Bill Williamson has a plan to change the world by exacting vengeance on the rich, and ripping Washington apart. He holds a number of people hostage and uses his captives as his political platform to spread his message and awaken humanity. It’s time to destroy the system, and change won’t happen peacefully.

Phase 4 Films is releasing the film as a Blu-ray + DVD combo pack. The 1080p transfer is decent and definitely doesn’t feel love budget. But the audio track isn’t really up to par. In fact, included is only a Dolby Digital Surround track, I mean come on…this is a DVD track not a Blu-ray track. It sounds fine to be honest but the potential is missed. The special features included are a commentary track from Uwe Boll. I love this guy and it is a real hoot. There is also a making of featurette and a trailer included.