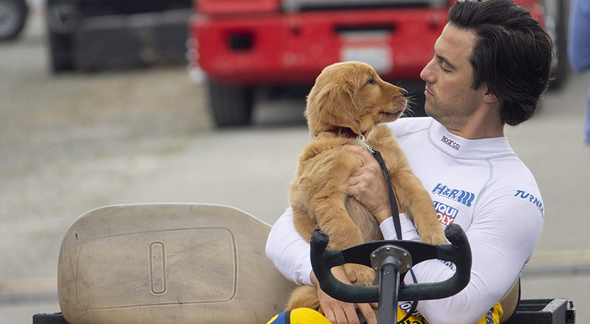 There are two kinds of people in this world.  Dog people (guilty) and cat people.  Dog people, please continue reading.

Meet Enzo.  He is an older dog that has lived an amazing life.  And, if you have a couple of hours to spare, he’ll share his story with you.  Enzo (voiced perfectly by Kevin Costner) is chosen as a pup by Denny Swift (Ventimiglia), a race car trainer who aspires to one day drive in Formula One races.  As the years progress, the two are inseparable, sharing adventures both behind the wheel and at home,   Things get complicated when Denny meets Eve (Seyfried) and even more so when they have a daughter, Zoe (Ryan Kiera Armstrong).  Eve’s parents, played by Kathy Baker and Martin Donovan, are well off and not happy with their son-in-law’s profession.  Denny has begun to get some racing gigs, but they take him away from home for prolonged periods.  Things get worse when Eve becomes sick.  Can Enzo save the day?

An entertaining film that’s light on plot points, “The Art of Racing in the Rain” is the kind of film Walt Disney would make in the late 1950’s and early 1960’s (think “The Shaggy Dog”), though without such a dramatic backdrop.  Ventimiglia – in the Disney version Denny would be played by Fred MacMurray – does his best with the material he’s given.  I must admit that I’m really only familiar with Ventimiglia as Rocky, Jr. in “Rocky Balboa” and “Creed II.”  I didn’t watch “Heroes” and, though my wife loves the show, I don’t watch “This is Us.”  Considering a lot of his role is playing off of what Enzo is doing, he does a good job portraying a man who loves both his family and the art of going fast.  Seyfried is fine in a very one-dimensional role, making the best out of what she’s been given.  But the true star here is Costner.  He’s always had the kind of voice that you wish your next “Book on Tape” comes with.  It’s his story and he tells it with panache!

Media Mikes has teamed up with their friends at the Walt Disney Company to give (50) readers and a guest the opportunity to attend the advance screening of the new film “The Art of Racing in the Rain.”

All you have to do to attend is click HERE. The first (50) readers to do so will receive a pass for (2) to attend the screening. This is a first come/first serve giveaway. Once the allotted passes have been claimed the giveaway has ended. Enjoy the show!!

To celebrate the release of the DVD “Sonic Boom: Go Team Sonic!” and the new “Team Sonic Racing” Video Game, Media Mikes would like to give our our fans a chance to win these. If you want to win this great prize, please leave a comment below your favorite Sonic game or character to date This giveaway will remain open until June 15th at Noon, Eastern Time. This is open to our readers in US only. One entry per person, per household. All other entries will be considered invalid. Media Mikes will randomly select winners. Winners will be alerted via email.

It’s a Sonic you haven’t seen before – an ensemble comedy that pokes fun at action-adventure storytelling, but still manages to deliver plenty of adrenaline! Wherever he goes and whatever he’s up against, Sonic the Hedgehog is aided by his sidekick, Tails, and his friends Knuckles, Amy, and Sticks and, of course, attacked by his arch nemesis, Dr. Eggman.

On this action-packed DVD, join Sonic and the gang as they accept a dare from Dr. Eggman. Tag along with Sonic and Knuckles as they enter a game show. And find out what happens when Sonic’s status as the town’s biggest hero is threatened. And so much more!

We invite you to come out and enjoy the different food themes inspired by your favorite NASCAR drivers! NASCAR fans of all ages will enjoy the NBC Race Flag Chips Truck, NASCAR on NBC Go-Go Snow Cones Truck, and NASCAR on NBC Racecar-B-Q Truck. There will also be opportunities for attendees to participate in activities, games, and enter-to-win prizes. Below is the list of stops the food trucks will be located throughout Thursday, June 29 – Saturday, July 1st.