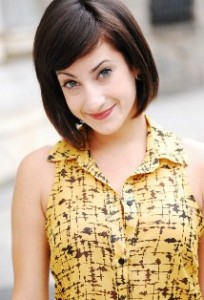 Rachael Ma stands at just under 5 feet and can currently be seen in the role of the robot opposite Frank Langella in “Robot & Frank”. If you have seen the film you know that Peter Sarsgaard is the voice of the robot but as Rachael puts it “people…literally think the robot IS a robot”. Thanks to Alterian, which is the company behind the LED helmets worn by the electro duo Daft Punk, Rachael gives wonderful life to this role. Media Mikes had a chance to chat with Rachael about the film and what she has planned next.

Mike Gencarelli: Tell us how you get started acting, singing and dancing?
Rachael Ma: My mom owns a dance studio in Fort Lauderdale, Florida and was a dancer herself. I was born into it. Being a dancer first, it was very easy to channel physicality into acting and singing. Movement tells a story.

MG: How did you get involved with the role of the Robot in “Robot and Frank”?
RM: The whole process was very quick; from my first casting (interview) to the first day of shooting was, only 2 days. Originally, the robot was supposed to be performed by another girl, a friend of the director, and the suit was specifically built to her body specifications. But the first time she tried it on in its entirety, she had a claustrophobia and refused to go back in it. I was a replacement and was brought in mostly because I fit the costume (and was willing to have claustrophobia).

MG: Tell us about the costume itself; was it different to act in?
RM: The heat, lack of vision and immobility of the parts made bringing the robot to life difficult. The robot is all-encapsulating in two layers: the first layer is a thick, rubber unitard that covers everything- head to toe, and then a delicate, fiberglass shell of body parts, including non-ventilated helmet lined in mesh and foam. No breathing room, no A/C, no fans. Just sweat. And wow, it was hot! We shot 12 hour days, outdoors, during a heat wave in the summer for 5 weeks. I was constantly dehydrated, nauseous and fainting. The helmet was another challenge because it was lined with a thick mesh and decreased my vision by about 70%. When we shot at night, I did everything in the blind. The robot joints are clunky and bulky which also made mobility a challenge. As a dancer, I have a fine understanding of controlling movement and to deliver a robot that appeared smooth, grounded and with precise comedic timing in its gestures, was no easy task. I rehearsed and analyzed its walk, its head quirks and wanted to develop certain nuances that made the robot lovable.

MG: Was there any particular scene that sticks out to you?
RM: In one scene I was supposed to catch a mimosa flute that falls off a table- it was no movie magic- I caught that glass out of thin air 13 takes in a row! Clunky robot hand and all! It was miraculous.

MG: How do you feel that stage differs from film and TV?
RM: Acting for the stage is a whole different beast. Its film/TV acting on steroids. Shifting between stage and screen takes adjustments in my mindset and body, but I always approach whatever work I’m doing thinking of the audiences perspective. It helps me focus on what needs to be seen.

MG: What else do you have planned for 2013?
RM: In 2013 you can expect to see me in New York City’s Broadway/off-Broadway shows, in Tokyo with the raucous ‘Nutcracker: Rated R’, and the occasional film/TV/commercial stint.