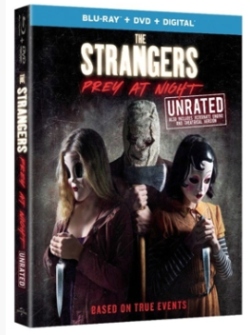 To celebrate the Blu-ray release of “The Strangers: Prey At Night“, Media Mikes would like to give two of our fans a chance to win a Blu-ray + DVD combo pack of the film. If you want to win this great prize, please leave a comment below your favorite horror film and why? This giveaway will remain open until June 12th at Noon, Eastern Time. This is open to our readers in US only. One entry per person, per household. All other entries will be considered invalid. Media Mikes will randomly select winners. Winners will be alerted via email.

A family’s road trip takes a dangerous turn when they arrive at a secluded mobile home park to stay with relatives and find it mysteriously deserted. Under the cover of darkness, three masked psychopaths pay them a visit to test the family’s every limit as they struggle to survive. Johannes Roberts, whose shark diving thriller 47 Meters Down was a smash hit,directs this horror film featuring Christina Hendricks (“Mad Men”), Bailee Madison (Don’t Be Afraid of the Dark), Martin Henderson (The Ring),and Lewis Pullman (Battle of the Sexes). 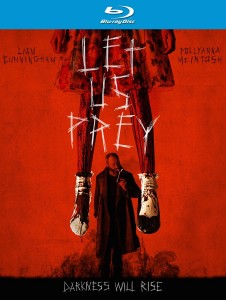 “Let Us Prey” drew me in with its very promising cast. I am a huge fan of Liam Cunningham from his role of Davos Seaworth in “Game of Thrones” and Pollyanna McIntosh from “The Woman”. The movie has a cool kinda mysterious feel to it right from the beginning but never shows its full potential.

Both of the leads do give good performances. In fact, Liam is downright creepy as hell. Pollyanna is just amazing and she deserves more mainstream roles. This film packs some serious gore and but the film’s payoff doesn’t deliver.

Official Premise: A rookie cop’s first night shift at a secluded police station becomes a terrifying fight for survival when a mysterious man is brought in and begins meting out divine justice to both cop and criminal alike.

The Blu-ray presentation is well-done. I liked the way the film was shot. Even though the whole film takes place at night, it is quite vibrant. The DTS-HD Master Audio 5.1 track works well with the suspense.

The special features aren’t anything special. There is a short 10 minutes featurette “Making Of”, which features cast/crew talking about the making of the film. Lastly, there is trailer included for this film as well as a few others trailers from Dark Sky Films.