Fans can choose from over 100 snarky-sweet Chuck & Friends images to create customizable, short movie messages for friends and family.  The Zoobe Peanuts StoryGIF works both from the home screen and inside the new iOS10 Messages app.

“The Peanuts brand is a classic, with adorable characters and storylines,” said Naz Amarchi-Cuevas, CEO Zoobe.  “We know that fans are choosing to communicate via snack-sized text messaging, and pairing this experience with a top brand such as Peanuts allows us to entertain and delight.”

On October 2, 1950, three kids appeared on the funny pages of seven newspapers. Over the next 50 years, Charlie Brown, Patty and Shermy would be joined by a whole cast of characters that forever changed the landscape of the newspaper comics, becoming one of the most popular and influential in the history of the business, with nearly 18,000 strips published in all.  Today, the Peanuts gang are stars of some of the most beloved holiday children’s television specials of all time, featured in books, music, theme parks, and a wide variety of consumer products, and the hit 2015 feature film The Peanuts Movie, from Blue Sky Studios and Twentieth Century Fox.

“Peanuts is timeless, and we’ve been able to maintain the brand’s popularity by knowing our audience, and meeting them where they are,” said Roz Nowicki, Executive Vice President of Peanuts Worldwide and Iconix Brands’ Entertainment Group. “Zoobe has a strong track record of digitizing classic properties, while still holding onto the authenticity that makes them great.”

Zoobe is the leading character voice-messaging app that works for both iOS and Android. It enables 3D animated characters to perform their user’s voice messages and then creates easy-to-share video clips. Zoobe’s StoryGIF Apps are snack-size, socially shareable, text-ready animations featuring today’s most iconic characters.  These trendy apps, geared toward early adaptors, allow fans to express themselves in an exciting new way; taking text communication to a whole new level.  Easy and inexpensive. Quick and convenient.  Through its expressive power Zoobe redefines how we connect with each other in our daily smartphone communication; with an international reach that has led to major partnerships with companies such as Sanrio, Peanuts Worldwide, Sony Pictures Entertainment, Capcom, ZeptoLab, WWF, AIS, StudioCanal and more.

The PEANUTS characters and related intellectual property are owned by Peanuts Worldwide LLC, a joint venture owned 80% by Iconix Brand Group, Inc. and 20% by members of the Charles M. Schulz family. 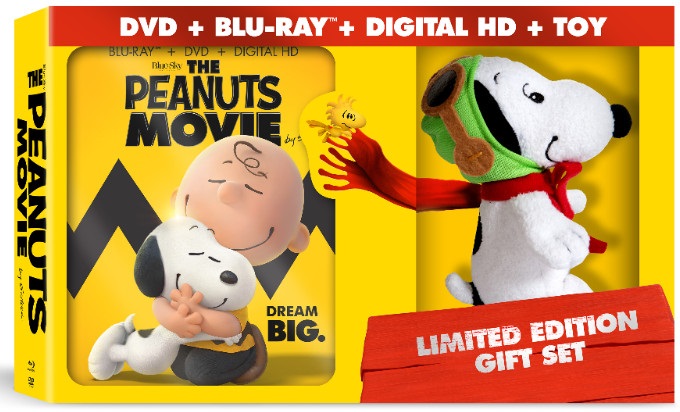 And for a limited time, get a Snoopy Flying Ace plush toy with THE PEANUTS MOVIE DVD,
Blu-ray™ and Digital HD combo pack on March 8 making it the perfect gift for Easter baskets.

In THE PEANUTS MOVIE, good ol’ Charlie Brown, Snoopy, Lucy, Linus and the rest of the beloved Peanuts gang appear as you’ve never seen them before in a brand-new feature film from the imagination of Charles M. Schulz and the creators of Ice Age. Join everyone’s favorite eternal optimist, Charlie Brown, as he embarks on a heroic quest, while his beagle pal Snoopy takes to the skies to pursue his arch nemesis, the Red Baron. It’s a hilarious and heart-warming adventure!

THE PEANUTS MOVIE is directed by Steve Martino (Dr. Seuss’ Horton Hears a Who!) and produced and written by Bryan Schulz, Craig Schulz and Cornelius Uliano. Paul Feig (Spy, The Heat) and Michael Travers are also film producers.

With the Collector’s Edition Blu-ray™, DVD and Digital HD fans can go deeper into the world of THE PEANUTS MOVIE with these fun-filled special features! Watch all-new Snoopy Snippets, check out the delightful documentary about the film’s extraordinary journey from the comics to the big screen, learn to draw Peanuts characters, sing along to music videos, choose your favorite songs from Snoopy’s Playlist and more! 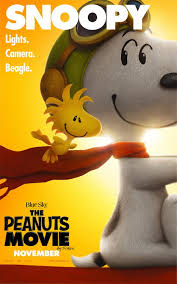 For those of us from a certain time, the “Peanuts” comic strip is a definite part of our growing up. I collected the paperback books, read the daily comic strips and can proudly say that I am so old that I can remember watching “A Charlie Brown Christmas” when it debuted! Five decades of memories are treated with the respect they deserve in the new film “The Peanuts Movie.”

As the film begins, the gang are celebrating a new snow fall, which signals a snow day. We gradually meet all of the familiar characters (Linus, Lucy, Sally and, of course, Snoopy). And we meet a new one when a moving truck shows up. The family consists of a mother and father and a pretty little red-headed girl. Cue the arrows to the heart – Charlie Brown is in love.

A production from the same group that made the “Ice Age” films, I have to give great credit to the filmmakers for keeping the look of the characters the same. Even though the animation is done via CGI, the way the characters move and interact is similar to the original hand-drawn films and television specials from the past. Each character is given their familiar traits (Lucy’s vainness, Schroeder’s piano playing, Linus and his blanket) and situations. Each character is given their due, almost as if the film was a true ensemble piece. The story is straight-forward but will be entertaining for both young and old viewers.

Sometimes when my wife and I go to Walmart we’ll go near the aisle that has the musical Snoopy figures. We have been known to press “on” occasionally and do the Snoopy dance in the middle of the store, much to the enjoyment of the other customers. Go see “The Peanuts Movie.” You’ll be doing the Snoopy dance up the aisle when it’s over! 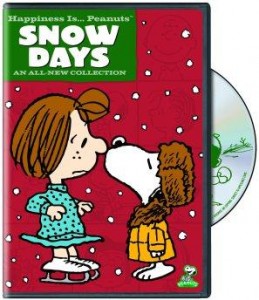 The “Happiness is Peanuts” series of DVDs each contain specials along with “The Charlie Brown and Snoopy Show” episodes.  “Snow Days” is the second in the series after “Snoopy’s Adventures” and will be followed by “Friends Forever”, which will be released December 27, 2011.  This DVD was cute but didn’t totally get me in the the season mood.  The idea of the disc is that is plays as holiday specials but really it is barely themed as so.  Overall though I would say that they are worth a watch to revisit the old “The Charlie Brown and Snoopy Show” feel but not real re-watchable.

“She’s a Good Skate, Charlie Brown” follows Peppermint Patty as she pursue her ice-skating dream. This is the primary episode of the disc.  It is cute but I could see it working a lot better as a short.  I did in fact enjoy the three short stories the 1985 “The Charlie Brown and Snoopy Show” series.  “The Play,” follows Charlie Brown as he reminisces about “the most interesting Christmas ever” for a school assignment. It was cute and really the only thing Christmas related on this disc.  The next short, I was literally laughing so hard I cried called “Sweet Babboo”.  It focuses on Valentine’s Day and the group worries about getting card.  Very funny!!! The last short is called “Snoopy’s Story” which features Peppermint Patty (again) as his writes an very ‘tall tale’ essay about Snoopy.  It is also cute.  Honestly I might go as far as to say that this set is worth it just for the “Sweet Babboo” short.

Synopsis: Everyone’s favorite Peanuts gang is at it again in Happiness is Peanuts: Snow Days. Follow Snoopy and gang in an episode from The Charlie Brown and Snoopy Show and the newly remastered classic She?s a Good Skate, Charlie Brown TV special all on one DVD!