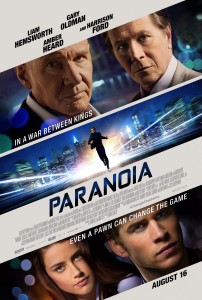 Paranoia, paranoia, Gary Oldman’s coming to get me. Or is it Harrison Ford? Unfortunately it really doesn’t matter in the film Paranoia as this amazing cast’s greatest weapons are sadly their cell phones and techie babbling.

The film centers on Adam Cassidy (Liam Hemsworth), a young employee at a major tech company whose group is about to propose a smart phone concept to the intimidating Nicolas Wyatt (cockney Gary Oldman). The proposal’s a failure and Adam’s entire peer work group are abruptly fired. Immediately they all turn to heavy drinking on the not-yet-cancelled corporate credit card. Despite his stupidity in this decision, Wyatt decides Adam’s just the man to infiltrate the company of his equally tech-savvy rival, Jock Goddard (Harrison Ford). Helping Adam on his mission is that in his drunken celebration he just happened to have sex with the rival company’s marketing woman, Emma (Amber Heard). Of all the bars in all of New York…Also coincidentally, Emma has the highest level of access in the Pentagon-level security surrounding Goddard’s new smart phone. If you’re already questioning a lot of the logic in this setup, you get the gist of what you’re in for. The questions never stop piling up.

I guess it shouldn’t be a surprise that a film titled Paranoia is actually fairly self aware but blatantly stating it’s own flaws as when Goddard calls out protagonist Adam for being nothing but “a tool, an empty vessel” in his fight with Wyatt seems a bit much. Even if director Luketic’s usage of Hemsworth seems to actually be something akin to a man fatale to exec Emma. This emptiness in our hero isn’t the only lack of personality in this film, virtually no one here is playing a real human. Richard Dreyfuss appears as Hemsworth’s sickly father whose care drives Adam’s financial need to work for Wyatt. He’s there to be used as bait and do little else, though he does manage to wring some laughs out of his curmudgeonly character. Likewise, while it’s exciting to think of Harrison Ford having a snarl off with Gary Oldman, when they’re both saddled with the specs of fictional smart phones, you actually get really bored. In one scene, cell phones were treated with such over the top suspicion that I was tempted to thinking the film had been sent through that controversial process E.T. underwent some years back where guns were actually replaced with walkie talkies for the family audience. Unfortunately not the case.

Finally, despite all its late in the film twists, Paranoia remains completely predictable. For this reason the movie unfortunately lives down that mid-August/end of summer of mainly just being forgettable.

Media Mikes would like to a prize pack for the new “Paranoia”, which hits theaters August 16th. If you would like to enter for your chance to win this great prize, please leave us a comment below or send us an email with what makes you paranoid? This giveaway will remain open until August 30th at Noon, Eastern Time. This is open to all fans of Media Mikes, worldwide!! One entry per person, per household. All other entries will be considered invalid. Media Mikes will randomly select winners. Winners will be alerted via email.

The prize pack includes the following:

The high stakes thriller Paranoia takes us deep behind the scenes of global success to a deadly world of greed and deception. The two most powerful tech billionaires in the world (Harrison Ford and Gary Oldman) are bitter rivals with a complicated past who will stop at nothing to destroy each other. A young superstar (Liam Hemsworth), seduced by unlimited wealth and power falls between them, and becomes trapped in the middle of the twists and turns of their life-and-death game of corporate espionage. By the time he realizes his life is in danger, he is in far too deep and knows far too much for them to let him walk away.