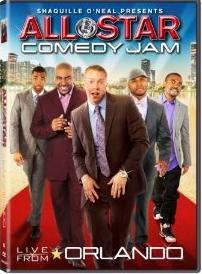 “Shaquille O’Neal Presents: All Star Comedy Jam – Live From Orlando” is the fourth time that Shaq has presented these hilarious comedy specials. In the previous specials he has showcased the following amazing talent including, Cedric the Entertainer, Kevin Hart, Tommy Davidson, Mo’Nique and D.L. Hughley. This time around Gary Owen known best for his roles in the film “Think Like A Man” and TV series, Tyler Perry’s “House of Payne”, hosts this latest installment. Shaq has also personally handpicked some of stand-up comedy’s most talented comedians including Capone, Lil’ Duval, Tony Roberts and Jay Pharoah. If you are looking for some laugh-out-loud laughs…look no further.

Media Mikes had the privilege to chat with Gary Owen and he is one of comedy’s best comedians, click here to check it out!  “All-Star Comedy Jam – Live from Orlando” was filmed at Hard Rock Live in front of a live audience in Orlando FL and you can just feel the energy during this show.  The only bad thing about this release is that it is just over an hour, I would have loved to see this expanded longer. I would have also expected extended sets on the extras.  Though they are also not available on the extras. The special features included are a “Backstage Jam” behind-the-scenes featurette, which is some fun stuff. Lastly there are also some trailers included.  Hey Shaq, when’s the next one coming out?

Shaquille O’Neal is joining the the TV show “Inside the NBA” on TNT. Shaq recently retired from the NBA in June due to persistent injury. He is a four-time NBA champion during his 19-year career. Shaq is getting ready to join the show alongside Charles Barkley, Kenny Smith and Ernie Johnson. Movie Mikes had a chance to attend a conference call for the formal announcement of Shaq joining the Turner team and got a chance to get some good Q & A.

Q: Where you concerned right off signing a multi-year agreement with Turner Sports?
A: I’m blessed to have the opportunity to have [other networks] and TNT come after me. But it was a deal I couldn’t resist.  Out of my respect for everybody I didn’t want to make it a ‘this and that’-type of war. I made my decision very quickly and very professionally. I thought TNT and Turner was the place for me and I’m going to have fun doing it.

Q: Kenny Smith gave you the nickname “The Big Analytical”, do you like that one?
A: [laughs] I like that one. Good job, Kenny. That’s pretty good.

Q: Did you ever watch TNT’s “Inside the NBA” during your playing days?
A: I did watch the show. It was one of my favorite shows. As a matter of fact, I watched it after every game. The interaction between Ernie Johnson, Kenny Smith, and Charles Barkley was very entertaining and very fun, and I’m honored to be able to sit next to those guys.

Q: You think you will ever want to come out of retirement and get out there again?
A: No. One word answer: No.