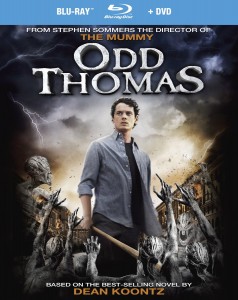 “Odd Thomas” is based on Dean Koontz’s novel of the same name. It is directed, written and co-produced by Stephen Sommers, aka the director of “The Mummy” and “Van Helsing”. It stars the fantastic Anton Yelchin (“Fright Night”, “Star Trek”) and Willem Dafoe (“Spider-Man”). Where the hell did this film come from? And I also thought to myself why didn’t this film get a bigger release? Then I saw it. It is very ambitious and quite visual but also lacking that big-budget success factor. I call this a one-timer. But if you are a hardcore fan of the book, this is very true and will let you satisfied.

Official Premise: Small-town fry cook Odd Thomas (Anton Yelchin) is an ordinary guy with a paranormal secret: he sees dead people, everywhere. When a creepy stranger shows-up with an entourage of ghostly bodachs – predators who feed on pain and portend mass destruction – Odd knows that his town is in serious trouble. Teaming up with his sweetheart Stormy (Addison Timlin) and the local sheriff (Willem Dafoe), Odd plunges into an epic battle of good vs evil to try to stop a disaster of apocalyptic proportions.

Since this is from director of “The Mummy”, you would expect that this would be very visual effects heavy and in fact it actually is. The film packs some great VFX and the 1080p transfer support it very well. The film is also quite dark yet it still is very sharp. The DTS-HD Master Audio 5.1 track also works well with the jumps and the creepy/yet action packed score. There are no special features included, which just blows my mind and screams LAZY to be honest. A featurette on the visual effects alone would have been great. 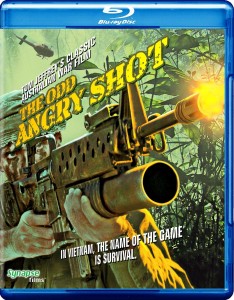 “The Odd Angry Shot” is a highly-acclaimed Australian war film taking a look into the hell of Vietnam.  I have to admit, I was not aware of this film prior to this release.  I know that when I see Synapse Films backing a film that it has to be good..or at least worth checking out.  Naturally, I am not a big fan of war films, not sure 100% way though.  I enjoy watching them but I never rush out to revisit again. The film stars Bryan Brown, who then went on to do films like “Breaker Morant” and “F/X” series. “The Odd Angry Shot” has never before been released on DVD in the U.S., so fans of this classic war film should be excited to finally see it getting some love. The film itself shows a different side of the war and really gets down and dirty to show the gritty truth behind it.  Definitely worth a rent for sure!

Official Premise: Tom Jeffrey’s classic Australian film, “The Odd Angry Shot”, is set in the late 1960s during the brutal war Australians shared with the United States: the struggle for Vietnam. Harry (Graham Kennedy), a hard-edged Special Air Service Corporal, meets a new company of soldiers during his second tour in Vietnam. There’s the naïve Bill (John Jarratt), the easy-going Bung (John Hargreaves), the blunt Rogers (Bryan Brown), the pragmatic Dawson (Graeme Blundell), and the youthful and innocent Scott (Ian Gilmour). Because of their training as professional soldiers from Australia’s toughest Army unit, these men believe they can deal with any situation. They pass the time playing practical jokes, getting into drunken brawls and humoring themselves to keep their minds off the war. But, when the first odd angry shot rings out, and an enemy mortar barrage hits their camp causing many casualties, the men realize their protective shield of humor is no defense at all against the harsh realities of armed combat.

For a film dating back to 1979, This film has never looked better with its new high-definition 1080p (1.78:1) transfer which was taken from original vault materials. Since this film has been given a proper U.S. release since VHS. So this should be a real treat for fans of this cult classic.  Same goes for the DTS-HD Master Audio 2.0 track, which works well showcasing the action from the war. Like most Synapse Films releases “The Angry Odd Shot” also comes with a sharp reversible cover art. The special features included are not spectacular but worth checking out. There is an audio commentary with Producer/Director Tom Jeffrey, Producer Sue Milliken and co-star Graeme Blundell. Worth checking out if you are a fan of the show. There is a featurette “Stunts Down Under with Buddy Joe Hooker”, which looks into how the stunts were performed.  Lastly, there is an original theatrical trailer included.

To celebrate the release of “The Odd Life of Timothy Green” on Blu-ray ™ and DVD, Media Mikes would like to giveaway FIVE copies of the Blu-ray + DVD combo pack. If you would like to enter for your chance to win a copy, please leave us a comment below or send us an email indicating your favorite family film. This giveaway will remain open until December 16th at Noon, Eastern Time. This is open to residents of the United States only. One entry per person, per household. All other entries will be considered invalid. Media Mikes will randomly select winners. Winners will be alerted via email.

Disney’s “The Odd Life of Timothy Green,” one of the year’s most uplifting and enchanting family films, springs up on Blu-ray™ Combo Pack, DVD, High Definition Digital and On-Demand platforms on December 4, 2012. It’s the perfect, must-own family-film for audiences of all ages to enjoy and snuggle up to this coming holiday season.

From Academy Award-nominated writer/director Peter Hedges (Dan in Real Life, What’s Eating Gilbert Grape), and starring Golden Globe® winner Jennifer Garner, Joel Edgerton, Oscar® winner Dianne Wiest and CJ Adams as Timothy Green, comes this highly imaginative story about a happily married couple who can’t wait to start a family but can only dream about what their child would be like. Then one stormy night young Timothy shows up on their doorstep. Soon they and the small town in which they live learn that sometimes the unexpected can bring some of life’s greatest gifts. The story is written by Ahmet Zappa (“American Gangster,” “Changeling”).

“The Odd Life of Timothy Green” Blu-ray Combo Pack provides viewers with the chance to delve deeper into this captivating movie experience through never-before-seen bonus features, including the documentary “Family Roots: Bringing ‘The Odd Life of Timothy Green’ to the Screen,” which looks at this unique family story and the creative team that brought it to life; “Glen Hansard: Behind ‘This Gift” – the Academy Award® winning songwriter tells how he and Marketa Irglova crafted the moving end-credits song; “This Gift” Music Video by Glen Hansard; Five all-new deleted scenes; and a director audio-commentary. 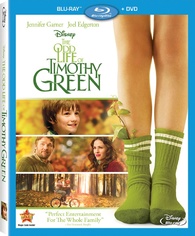 When it comes to the whole family movie genre, it usually lands too cheesy or too kiddy.  But “The Odd Life of Timothy Green” is a nice blend of comedy, drama and inspiration for the whole family.  When this film was in theaters, I wasn’t particularly interested in the film but I figured I would give it a shot on Blu-ray.  The cast is good but Edgerton feels a little out of place from his roles in “Warrior” and “The Thing”. Garner is good as the neurotic mother. I expect we will be seeing a lot of CJ Adams, he definitely had a lot of potential.  So get the family together and get ready to get the chills.

Official Premise: Disney brings enchantment home with The Odd Life Of Timothy Green, an inspiring, magical story for the whole family starring Jennifer Garner. Cindy (Garner) and Jim Green are a happily married couple who can’t wait to start a family but can only dream about what their child would be like. When young Timothy shows up on their doorstep one stormy night, Cindy and Jim – and their small town of Stanleyville – learn that sometimes the unexpected can bring some of life’s greatest gifts.

Disney released this film in a combo pack with a Blu-ray and DVD included.  The film delivers a beautiful video presentation with its 1080p transfer. Geoff Zanelli’s score really seals the deal with its very sharp DTS-HD MA 5.1 track. The special features included are a “This is Family”, which is a look into how the story became. “The Gift of Music” is a feature on Glen Hansard’s song ‘This Gift’ and Geoff Zanelli’s score. There is also a music video for Hansard’s song. There is a audio commentary track from the director, Peter Hodges. Lastly, there are five deleted scenes included with optional commentary tracks available from the director. 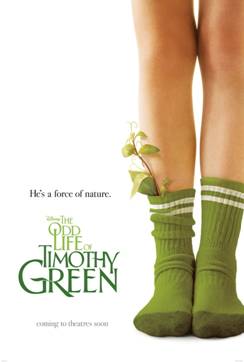 The official trailer for THE ODD LIFE OF TIMOTHY GREEN is now live on Yahoo! Movies and Disney.com. Check it out below:

Academy Award®–nominated director/writer Peter Hedges (“Dan in Real Life,” What’s Eating Gilbert Grape?”) brings enchantment to the screen with “The Odd Life of Timothy Green,” an inspiring, magical story about a happily married couple, Cindy and Jim Green (Jennifer Garner and Joel Edgerton), who can’t wait to start a family but can only dream about what their child would be like. When young Timothy (CJ Adams) shows up on their doorstep one stormy night, Cindy and Jim—and their small town of Stanleyville—learn that sometimes the unexpected can bring some of life’s greatest gifts.

When young Timothy suddenly comes into the lives of Cindy and Jim Green, they learn that sometimes the unexpected can bring some of life’s greatest gifts.