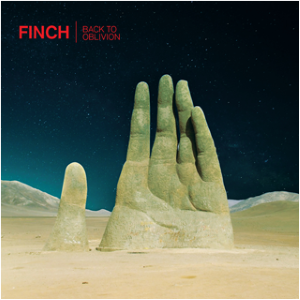 Post-Hardcore band Finch is back with their first new full-length release in 9 years. Titled “Back to Oblivian” the album is being released via Razor and Tie records and features 12 brand new original tracks produced by Brian Virtue (Deftones, Janes Addiction). Though it lacks the charm and catchiness of the bands earlier releases “Back to Oblivion” still has something unique for the bands long time fans.

The album has somewhat of an eerie vibe as it traverses through various high and lows starting with the album’s title track “Back to Oblivion”. The tracks seem to serve multiple purposes as it not only shares the name of the album but it also acts as the bands statement to its listeners that they are in fact back. However, don’t expect a reboot of the bands successful 2002 “What It Is to Burn” album as “Back to Oblivion” has a much more progressive and experimental feel. A perfect example of this is the tracks “Murder Me” which features a multi-layered landscape which slowly gives away to a more alt-rock style. While the track “Play Dead” combines similar layered elements but with more anthemic chorus passages which instantly throw you back to the bands more familiar 2000’s era recordings.

Other tracks worth noting were the chaotic “The Great Divide” which blasts through you speakers with reckless abandonment as does the punk tinged “Us vs. Them” and “Two Guns to the Temple”. Though the album left me a little underwhelmed it’s great to see and hear the band back to full capacity. My biggest hope is that this release has kick started the bands creative process and that this release is the first in a long line of new releases from the band. 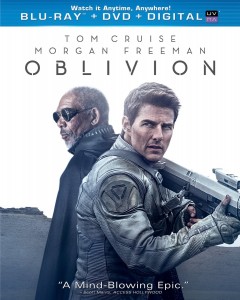 A futuristic sci-fi flick starring both Tom Cruise and Morgan Freeman?! Sign up me!! Wait a sec it is made by the director of “TRON: Legacy” and producers of “Rise of the Planet of the Apes”. I’ll take two please? I am a big sucker for sci-fi, especially an original film like “Oblivion”. It is not a sequel or prequel or remake. It is new, original and very epic. The film is very ambitious bringing a lot of ideas to the table all at once but it still manages to work out and really blows you away. After Joseph Kosinski directed “TRON: Legacy”, he has been on my top list and he delivers again! Can’t wait to see what he does next and fingers crossed for “TRON 3”. Sci-fi junkies should definitely check this out for sure. It is fast, crazy and a great time.

Official Premise: On a spectacular future Earth that has evolved beyond recognition, one man’s confrontation with the past will lead him on a journey of redemption and discovery as he battles to save mankind. 2077: Jack Harper (Cruise) is one of the last few drone repairmen stationed on Earth. Part of a massive operation to extract vital resources after decades of war with a terrifying threat known as the Scavs, Jack’s mission is nearly complete. Living and patrolling the breathtaking skies from thousands of feet above, his soaring existence is brought crashing down when he rescues a beautiful stranger from a downed spacecraft. Her arrival triggers a chain of events that forces him to question everything he knows and puts the fate of humanity in his hands.

Not that I expected any less from a visual film like “Oblivion” but it is easily one of the best Blu-ray presentation that I have been all year. Universal released this epic flick as a sweet combo pack with a Blu-ray + DVD + Digital Copy and UltraViolet digital copy. The film is just a visual effects masterpiece and really looks stunning with it’s 1080p transfer. Same came be said for the film’s extremely epic DTS-HD Master Audio 7.1 audio track.  My walls were literally rattling due to this film and I swear I thought I heard my neighbor’s car alarm going off. M83’s score also really scores with this track as well, another favorite of mine this year.

The special features are nothing short of great just like the film. There is a solid audio commentary track with the director Joseph Kosinski and Tom Cruise deliver. The track is very extensive and worth checking out. It is also very rare to see such a big actor do a track like this but I really admire his support to the film and it really got me pumped to watch it again. “Promise of a New World” is super impressive five-part behind-the-scenes documentary. If you didn’t get enough great content from the commentary track, this really dives into the making of this production and runs just over 45 minutes. There are four deleted and alternate scenes included. Lastly and my favorite is an M83’s isolated score presented in Dolby TrueHD 5.1 surround. Totally amazing!

2077. Its been 60 years since the last Super Bowl was held. Earth is now a radioactive nightmare following an alien attack. After destroying the moon, and turning Earth into a topsy-turvy world of earthquakes and tsunamis, the aliens came down to the surface. Thanks to nuclear weapons we won the battle. But we lost the war, as the planet was no longer habitable. The remains of the human race now reside on Titan, the largest moon of Saturn, while what remains of Earth is patrolled by mechanical drones. They are there to hunt and destroy the few remaining aliens who remain. Of course where there are mechanical objects there must be a mechanic to fix them. Mechanic #49 is named Jack Harper (Cruise). He goes about his job daily, fixing drones and blasting the occasional alien. The daytime goes pretty well for Jack. But at night he’s haunted by a recurring dream featuring himself and a beautiful young woman (Kurylenko). It is a dream, isn’t it?

An ambitious film with a story that begins to slip into camp, “Oblivion” could have been a great addition to the science fiction genre’. Unfortunately, after a strong first half, we’re dealt with some plot points that defy credibility. Jack is living the sweet life with Victoria (Andrea Riseborough), who serves many functions. Technically she is Jack’s air traffic controller. It’s her job to assign his work and then direct him where he needs to go. She’s also his eyes when he’s on the planet’s surface, always on the lookout for anything out of the ordinary. The two are also a romantic couple, spending their off hours swimming in their rooftop pool and counting the days until they are relieved of their post and allowed to join the rest of the world on Titan. Each morning Victoria gets her orders from Sally (Melissa Leo), who ends each daily exchange with the same question: “Are You An Effective Team?”

Despite a strong performance by Cruise, as well as a fine supporting turn by Morgan Freeman, “Oblivion” begins to lose steam when Jack tracks a returning spaceship to the planet, discovering several occupied life pods. Trained to kill any humans not cleared in their systems, the drones kill all but one of the ship’s crew. Before they can kill the last one Jack intervenes and the drone stands down. When he opens the pod he is stunned to see the same woman who has been filling his dreams. He takes her to Victoria, but she is not pleased to see her. She begins to feel that she and Jack are no longer an Effective Team! But her love for Jack keeps her from notifying Sally that there may be a problem with the mission, though she’s not sure what.

As I noted above, “Oblivion” could have been great. However, once the mystery woman appears the film begins to slip away. One major error kept screaming to me during the remainder of the film. Even though the mystery woman is in her underwear when found, and her ship is destroyed, she keeps showing up in various outfits that include her name. Where did they come from? Why do they fit so well? And why does the music get extra loud when I ask myself these questions?

On the positive side, the film features an amazing array of special effects, including such incredible set pieces like a deserted New York library or a former ocean, now a barren patch of land with moored battleships littered upon it. If only as much time was spent on the too-predictable story as was spent on the special effects. 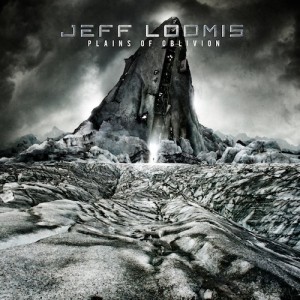 “Plains of Oblivion” is the second solo release from Nevermore guitarist Jeff Loomis. The album hosts a variety of musicians such as former Megadeth guitarist Marty Friedman. The album is being released via Century Media Records and features 10 original tracks that were produced by Aaron Smith.

The new album by Jeff Loomis is more than just another progressive metal album. “Plains of Oblivion” Is an album packed full of songs that will make your head spin and your ears bleed from the sheer sonic goodness. Each of the 10 songs on the album feature creative structures that even fair-weather fans of    progressive metal music will enjoy. Tracks such as “Escape Velocity” and “Requiem for the Living” were strong personal favorites as I really loved the thunderous background of each track. Couple that with Loomis’s over the top solos and you can’t go wrong. Fans of Jeff’s other work will surely want to check this album out as it really showcases his playing on a whole new level. Guest appearances by Chris Poland on the track “Continuum Drift” and Tony MacAlpine on “The Ultimatum” were also highlights of “Plains of Oblivion”.

Though the album took a few listens through before I could fully appreciate it I found it to be a pretty good album. I would have liked a couple of the songs to be trimmed down a bit more but lengthy songs come with the territory. If you are looking for an album with some really great playing then do yourself and pick up the latest album from Jeff Loomis.