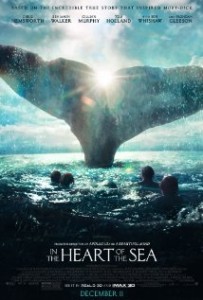 I’m sure like most American children who enter the public education system, there came a point in your schooling that you had to read or were told you need to read “Moby Dick”. It’s a tale of revenge, obsession, and camaraderie, but one I barely remember. I’m actually not certain if I’ve read it or if I’ve ever watched the myriad of movies that have been created in its wake. I guess you could say that’s a same since it’s considered an American literary classic. After watching Ron Howard’s “In the Heart of the Sea” I can easily say it’s a shame it’s not going to be a classic.

What immediately separates “In the Heart of the Sea” from other “Moby Dick” tales is that Howard’s film is about the events that inspired Herman Melville’s novel. So say goodbye to the insane Captain Ahab, the curious Ishmael and the stoic Queequeg, and welcome your new narrator, Thomas Nickerson. The story is framed by the aged and rustic Nickerson, played by Brendan Gleeson (and Tom Holland in the past). Nickerson recounts the tale of the whaling ship, Essex, to the aspiring author, Melville (Ben Whishaw).

Despite being from the viewpoint of the young cabin boy, we recount much of the past through the life of Owen Chase (Hemsworth). He’s a young, but experienced whaler who’s attempting to establish the Chase name and put the failed farming past of his father behind him. He’s the first officer of the Essex, but may as well be the leader. Chase scowls behind Captain George Pollard Jr. (Walker), but Pollard scowls back, fearing that Chase’s presence is a threat to his young career as Captain.

The crew of the Essex sails off to warmer seas to find whale oil riches, but come up dry. While recharging and metaphorically refueling in a small South American village on the west coast of the continent, they hear rumors of a treasure trove of whales. There are two problems with this hearsay. The aquatic gold mine is thousands of miles away from land, in the middle of the Pacific Ocean. The other problem is a disturbing tale about a massive whale with a thirst for man’s blood and an axe to grind.

“In the Heart of the Sea” is one part historical events, one part embellished action sequences, and one part that can only be described as the Donner Party meets the Uruguayan Rugby team. Each part, in its own regard, is very interesting pieces to the cinematic puzzle, but Howard can seem to put them together. It’s a three act tale that handles different themes and tones, but the transitions between them feel unnatural and glaringly bad.

“In the Heart of the Sea” finds entertainment when it relies on the strength of its actors and captures the feeling of isolation amongst the crisp, calm sea. Our character’s plight is diminished by Nickerson’s interjections and Meville’s follow-up questions to the story at hand. As for the monstrous whale that always becomes the focal point of these movies, it’s well handled. It’s a classic man vs. nature, without nature running amok and becoming too unbelievable. In a sea of movies hoping to become Oscar contenders, Howard’s latest movie can only compete at the JV level.