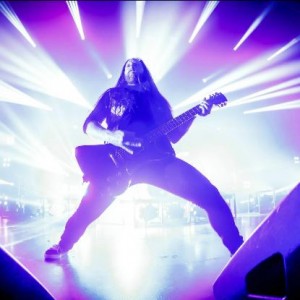 Niclas Engelin is probably best known for his guitar work in the Swedish heavy metal band In Flames. However when he’s not holding down the six duties there Niclas spends his time working on his melodic death metal group simply titled Engel. The group’s newest album titled “Raven Kings” was released in November 2014 and Media Mikes had the chance recently to speak with Niclas about its creation, what it was like working with Jacob Hansen and the prospects of the group touring in the United States.

Adam Lawton: Can you give us some of the background on Engel’s new album “Raven Kings”?
Niclas Engelin: After the last album “Blood of Saints” we decided to take some time and sort of regroup. We didn’t necessarily stop but we did take time to think about what it was we wanted to do with the band and just exactly how we wanted it to sound. We knew that we wanted the next record to be strong and well put together not just musically but also visually as well. We had lots of conversations about what the music for “Raven Kings” was going to be about. We took all the ideas from those conversations and sort of compiled them into one theme. Marcus and Mikael are big in to gaming and they had this vision of a post apocalyptic type game. I am not a gamer so I had to do some reading and also watched some films. We really just collected all these moods, ideas and themes and from there went to pre-production and so on.

AL: Can you tell us about working with Jacob Hansen this time around?
NE: Jacob and those guys are all friends of ours. He had wanted to work with Engel in some capacity for quite awhile now. I think we had been talking off and on about it for something like 3 years. We really liked the work that he did with Volbeat and we knew that he was capable of going the extra distance to make what was important to us happen. We talked a lot about this and I love how the album turned out.

AL: “Salvation” is a pretty intense song. What made you choose it as the album’s first single?
NE: (Laughs) It’s a very in your face song. We had never done a song as fast paced as this one before so when we were thinking about doing it we figured we could put a treatment together that really would shock people and let them know we are here.

AL: How does the creative process work for you with Engel as compared to when you are working on In Flames material?
NE: For me I have to think of these two bands as being from two different worlds. I really have to keep them very separate from one another as they are different things. The way Marcus looks at material might not necessarily be the same way Bjorn looks at material so I have to be conscious of that.

AL: What do you feel is the hardest part about balancing your time between both of the bands?
NE: For me it comes down to doing each of these when I have to do them. It’s just like getting the kids around for school each day and paying the mortgage. These aren’t things you can do only when you feel like it. (Laughs)I am always collecting ideas and working on various things. I essentially am always working. I love writing and performing music so much that I don’t mind that constant work process.

AL: What are the tour plans for Engel as we have yet to really see the band here in the United States?
NE: We have plans to start touring Europe in 2015. We will be out on a 6 week run over there and then heading back to Scandinavian. I really want to hit the United States also as it seems like every day I am being asked by someone as to when we will be there. (Laughs)

AL: What do you think has been the hardest thing about getting Engel over to the States?
NE: We want to make sure that we are going to be part of a good package that it going to make an impact. This will be our first good tour in the States and we want to make sure that the fans in the US see and hear what Engel is all about. That’s something that is very important to us.

AL: Does the band have any other plans going in to the New Year?
NE: We are getting ready to release another single off the album. We are currently in talks about what type of treatment we are going to use but I the song is going to “Fading Light”. I have met with the videos director a couple times and I do have a script but we still have a few more things to work out before we start shooting.