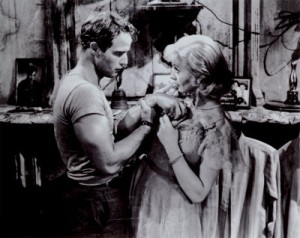 Who hasn’t seen the cinematic masterpiece called “A Streetcar Named Desire”. Thanks to Warner Bros for bringing us this wonderful celebration of the 60th anniversary and including the Original Restored Version.  Due to the 1951 Legion of Decency censorship, there was three minutes of previously unseen footage including the sexual tension between Blanche DuBois (Vivien Leigh) and Stanley Kowalski (Marlon Brando). Watching this film always leaves me yelling “Hey, Stellaaaaaa!” the rest of the day.  This is a wonderful release and is highly recommended for all fans of the film to experience this amazing film on Blu-ray.

This is the first time that this classic is making its way onto Blu-ray with a really stunning restoration.  It looks wonderful in its digitally remastered 1080p transfer in its original aspect ratio: 1.37:1.  The audio track included is an DTS-HD Master Audio Mono track, which preserves the original charm. I really enjoyed the fact that this book was released as a Digibook.  It comes with a 40-page book format with behind-the-scenes photography, production notes and biographies.  I really love these edition, instead of a boring empty case.

The special features are a bit disappointing for the Blu-ray debut.  This is not due to content but since the extras are presented in standard definition and not high definition.  There is a commentary track featuring producer Laurent Bouzereau with comments from co- star Karl Malden and historians Rudy Behlmer and Jeff Young.  This is highly recommended, Laurent Bouzereau knows so much about film and is fantastic to listen to.  There is a great documentary, which runs about 75 minutes, “Elia Kazan: A Director’s Journey”.  It is narrated by Eli Wallach and looks into Kazan’s career in depth.  “A Streetcar on Broadway” focuses on the original Broadway version. “A Streetcar in Hollywood” features Kazan’s chatting about the film’s road from the stage to the screen. “Censorship and Desire” is a big topic with this film and focuses on its dealings during time of release with Rudy Behlmer.  “North and the Music of the South” is a focus piece on composer Alex North. “An Actor Named Brando” is short feature on the legendary actor. “Marlon Brando Screen Test” is a really amazing rare behind the scenes look. There Outtakes that run about 15 minutes and also Audio Outtakes, which run about 17 minutes.  Lastly there are a bunch of trailers including original 1951 Warner Brothers, 20th Century Fox 1958 Reissue and United Artists 1970 Reissue.

Synopsis: “A Streetcar Named Desire: the Original Restored Version” is the film moviegoers would have seen in 1951 had not Legion of Decency censorship occurred at the last minute. Making its Blu-ray debut, stunningly restored and digitally remastered to brilliant 1080p clarity, this classic is presented in a collectible, premium 40-page Blu-ray book format, with behind-the-scenes photography, production notes, biographies and more! Elia Kazan masterfully directs Tennessee Williams? masterpiece starring Vivien Leigh, Marlon Brando, Karl Malden and Kim Hunter. Nominated for an unprecedented 12 Academy Awards,® including Best Picture, and winner of 4,* its contributions to film continue to be celebrated, holding its place on the AFI’s list of Top 100 Films. 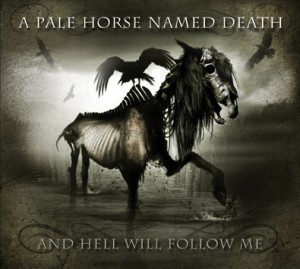 “And Hell Will Follow Me” is the debut release from Life of Agony drummer/ Type O Negative Co-Founder Sal Abruscasto’s new band A Pale Horse named Death. “And Hell Will Follow Me” showcases the many talents of Sal Abruscasto as he is the sole musician featured on the album. Abruscasto with the help of Matt Brown also produced the record which definatley blends all of Sal’s previous bands sounds into one doom filled ensemble.

“And Hell Will Follow Me” might be a little sluggish for your typical metal head. However for those Type O Negative fans out there looking for a similar sound look no further as “And Hell Will Follow” has that signature eerie sound the band was known for. Sludge rock mixed with a side of doom and a touch of techno samples will give fans of both Life of Agony and Type O Negative something to fill their ears with. Tracks such as “Serial Killer and “When The Crows Descend Upon You” were real stand outs for more as they had more of a hard rocking straight forward feel to them which when played live will surely conjure up a superior circle pit.

“And Hell Will Follow Me” showcases a very dark and gloomy sound that fans of both Abruscasto’s previous bands will surely enjoy.