Not only a few months ago, I discovered and got to dive into the comic series “The Metabarons Ultimate Collection” and fell in love with it. It is really a fantastic blend of amazing storytelling along science fiction. Well, of course as a fan I was hungry for more, well my prayers were answered with “Metabarons Genesis: Castaka”, which is a prequel the first series. Like “The Metabarons”, it is a not an easy series to just pick up and read, it is deep like the work that Jodorowsky is know for and that is what makes it exciting and very interesting read. A must if you are a fan of “The Metabaron”.

Official Premise: “The Metabarons” recounted the extraordinary saga of the genealogy of the galaxy’s ultimate warrior. But his ancestors also had ancestors. And far from being noble warriors with an inflexible code, one will discover they were in fact disloyal, vengeful pirates born out of brutality and war. From legendary creator Alexandro Jodorowsky and artist Das Pastoras, and for all of those who dreamt of a sequel to “The Metabarons,” comes instead the origin tale of their first ancestor, Dayal de Castaka.

One thing that I did some a small problem with was that this did feel a little shorter than Jodorowsky other comic series but I still enjoyed it nonetheless. I was not widely familiar with the work of Das Pastoras but I did really enjoy the illustrations from this book. The colors were vibrant and it was well drawn. I have to admit though, after reading this I did go back and re-read the Ultimate Collection of “The Metabarons” and “The Incal” Complete Collection again. I warn you though, this book is definitely relient on your having read both of those books previous to this to really get the full effect. 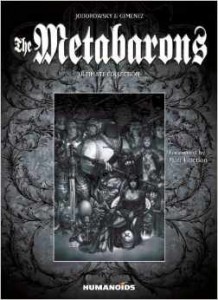 “The Metabarons” is the cult classic spin-off science fiction comic series from Alexandro Jodorowsky’s own cult classic series “The Incal”. The Ultimate Collection brings together this epic multi-part, multi-generational space opera that follows the Castaka Clan as their family rises to fame as the galaxy’s greatest warriors, the Metabarons. I recently feel in love with Alexandro Jodorowsky’s work after watching “Jodorowsky’s Dune”, which is an outstanding documentary on Alejandro’s failed film adapation of Frank Herbert’s novel “Dune” back in to the 70’s. Like “The Incal, “The Metabarons” is also heavily influenced by Frank Herbert’s “Dune” novels and includes aspects from Jodorowsky’s “Dune” as well. Again, if you are a sci-fi fan looking to discover something new or re-discover this cult classic, I highly recommend checking out this amazing collection.

Official Premise: A must-read cult spin-off of “The Incal,” by Moebius and Jodorowsky, centering around the fascinating lineage of the ultimate warrior. This collection introduces the Metabaron’s bloodline and reveals the origins of their deep-seated principles. Find out the source of the family’s vast wealth, learn why every Metabaron has cybernetic implants, and why the only way to become the next Metabaron is for him to defeat his own father in a mortal combat. Follow each successive generation as it struggles to overcome the forces amassed against it in a galaxy corrupted by greed, power, and terror. A true classic in the pantheon of graphic storytelling and Science Fiction as a whole.

Humanoid honestly does not mess around with their releases. This book is absolutely gorgeous and runs nearly 550 pages long at almost 2″ thick. No question, this is one of the most impressive comic releases that I have recently seen. If you’ve seen the film “Jodorowsky’s Dune”, and if you haven’t I HIGHLY recommend it, you will know that Alexandro developed a “book” for the film which includes the complete script wrapped around storyboards drafting out literally every scene and every character. There were originally only a handful of these made at the time but no only one or two are left. I believe that if Alexandro was ever to release that book to the world (which he really should), Humanoid would be the only company that would be able to do it justice. Just sayin’

The stories in this collection are so interesting and thought provoking. I really have a deeper appreciation for Jodorowsky’s work. This plays out like a space opera that is side acting as a futuristic Greek tragedy production. So there is a lot going on and it is so well tied together and delivered. The original French comics were reproduced in English in their original format. “The Metabarons Ultimate Collection” includes “Othon & Honorata”, “Aghnar & Oda”, “Steelhead & Doña Vicenta”, “Aghora & The Last Metabaron” plus two bonus short stories, “The Crest of Castaka” and “The Incal’s Dream”. So you get the works with this collection. If you are looking to get sucked and spit out by this incredible space opera, than I cannot recommend “The Metabarons” any more. I can’t wait to check out Humaoid’s release for “After the Incal” and “Final Incal” next.