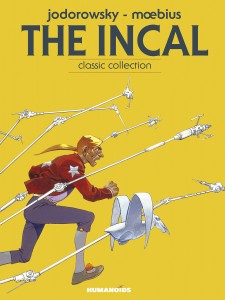 After watching “Jodorowsky’s Dune”, which is an outstanding documentary on Alejandro’s failed film adapation of Frank Herbert’s novel “Dune” back in to the 70’s. What I did learn from that film was that Alejandro Jodorowsky was still able to bring some of his vision from his work on that film to life in the medium of comic books. “The Incal” is the first in a series of science fiction comic books written by Alejandro Jodorowsky and illustrated by Moebius. Jodorowsky’s work was so powerful and immense that his world created in these books we referred to as, a fictional universe, “Jodoverse”. These comics were originally written in French only, so thanks to Humanoids for bringing them to the US and keeping Jodorowsky’s vision alive and going strong. This is a must buy for any sci-fi fan.

Official Premise: John Difool, a low-class detective in a degenerate dystopian world, finds his life turned upside down when he discovers an ancient, mystical artifact called “The Incal.” Difool’s adventures will bring him into conflict with the galaxy’s greatest warrior, the Metabaron, and will pit him against the awesome powers of the Technopope. These encounters and many more make up a tale of comic and cosmic proportions that has Difool fighting for not only his very survival, but also the survival of the entire universe.

If you are unfamiliar with Alexandro Jodorowsky, you will most likely recongnize this work including cult films like “El Topo”, “Santa Sangre” and “The Holy Mountain”. Moebius is an internationally acclaimed illustrator endless amounts of graphic novels. He is also a film designer for films like “Alien” and “The Fifth Element”. Obviously you can see why the collaboration worked so well between these two. This project was spawned after a seven-year collaboration by Alejandro Jodorowsky and Moebius dating back to between 1981 and 1988. The collection includes all six stories including “The Black Incal”, “The Luminous Incal”, “What Lies Beneath”, “What Is Above”, “The Fifth Essence Part One: The Dreaming Galaxy” and “The Fifth Essence Part Two: Planet DiFool”

“The Incal” is a strange and crazy French space opera mixed up with metaphysics and satire. The new Humanoids release came as a very sharp hardcover. It restored the original colouring and removed the censorship on the nudity. Humanoids also restored Jodorowsky’s “The Metabarons”, “After the Incal” and the last “Final Incal” comes out later this year in English. What I really enjoyed about this work is that you can’t just read this comic and look at the colorful pictures. It requires intelligence to be able to understand and really appreciate it. You have to experience each word of his very influential text. It is extremely cinematic and nothing like any other comic developed during its time.