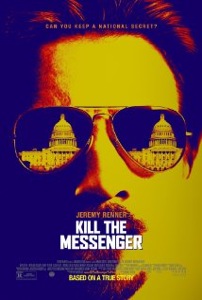 “Kill the Messenger” follows the fallout experienced by reporter Gary Webb of the San Jose Mercury News of his 1996 article “Dark Alliance.” The article linked the US’s own CIA with rampant dealing of crack cocaine in California for the eventual funding of Nicaraguan contras. Director Michael Cuesta’s version of it, thoroughly from Webb’s point of view, skillfully balances the political thriller with the family life of the reporter.

The first half of the film plays a bit like a television procedural episode with Webb going from source to source in chasing his story. If it’s a little by the numbers in that respect, it does give us the opportunity to enjoy scenes with Andy Garcia in a south American prison and Michael Sheen as DC insider who warns Webb of the dangers of chasing this particular story.

It’s just before Webb publishes his story however, where the film really picks up steam. In an ominous meeting with government suits, it’s hinted that Webb’s family could be ‘affected’ by his work, enraging Webb and spurring him on to complete his article. It’s a thrill to see Renner take the lead here as Webb after the last few years of supporting work in franchises and last year’s American Hustle. He plays him as a passionate family man with a slight sense of humor that he attempts to employ as defense to the very serious people he’s up against. Though he is not without his breaking points. At home he’s given strong support by Rosemarie DeWitt as his wife and Lucas Hedges as his 16 year old son who Webb strives to be as truthful with at home as he is when reporting. Even if his wife would rather he didn’t.

Much of the film after the published story focuses on the ripple effect of exposing the truth whereby the closer Webb gets to it, the more threatening his world becomes and the more viciously personal the media gets with Webb himself. Nathan Johnson’s score subtly increases the tension throughout while Cuesta powerfully weaves in actual archival media to show just how far reaching Dark Alliance’s impact was.

If the film seems a bit one-sided with Webb as the straight up hero, it’s devastating closing title cards will likely send you to seek out more about the story for yourself.

“Devil’s Messenger” is the first release from Southern California’s The Devastated a band whose line up consists of former Impending Doom and Oblige members. Their album is being released via Century Media Records and features 12 original tracks produced by Chris Eck. Fans of these members’ previous groups will surely want to check out this album.

Each of the 12 tracks contained on “Devil’s Messenger” is a gritty, down tuned master piece each containing enough power to raise the dead. The song “Swallowing Tumors” is what I would assume pure evil would sound like while tracks like “The Devils Messenger” and “Zombies” will feed the needs of those in love with the standard breakdowns often associated with grind core music.

Chris Eck did a good job of capturing the sheer intensity of the music while creating a very listenable album. If you are looking to expand you grind core collection go out and get the debut album from The Devastated.