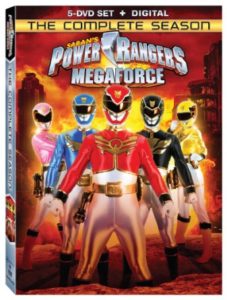 Some may not know but the “Power Rangers” series has never faded or slowed down in its success over the last 20+ years. The last two seasons were “Power Rangers Megaforce” and “Power Rangers Super Megaforce”. These two DVDs are each of the complete seasons included with a digital HD copy of each and some fun extras.

Power Rangers Super Megaforce: The Complete Season Synopsis: In order to stop ruthless Prince Vekar and his massive alien Armada, the Rangers have only one hope: to unlock the special keys — and harness the amazing powers of Legendary Rangers of the past!

Personally, I haven’t watched “Power Rangers” in a long time but watching these parts of this season I was easy drawn back in. I really enjoyed what they delivered. They were fun, cheesy and action packed. “Power Rangers Megaforce” includes the following special features Character Gallery, Zord Gallery and Power Rangers Morph Through 20 Years’ Video. Power Rangers Super Megaforce” also includes a featurette “Power Rangers: A Legacy”. 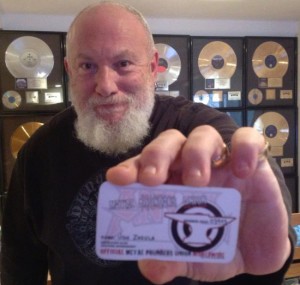 Jon Zazula affectionately known as Jonny Z by the heavy metal masses is a true living legend. As one of the founders of Megaforce Records,  Jonny and his wife Marsha are responsible for launching the careers of bands such as Anthrax, Testament and Metallica. Together with the Old Bridge Metal Militia Jonny and Marsha are putting on a benefit show in New Jersey to help people still feeling the effects of  Super Storm Sandy. Media Mikes had the pleasure of talking with Jonny recently about his career in the business and how the idea of the benefit came about.

Adam Lawton: For those not familiar with your history can you tell us a little bit of how you first got exposed to the heavy metal music scene?
Jon Zazula: My wife Marsha and I started a record store in 1981 with only about $180.00 in our pockets. Six months later we already were up to about $60-$70,000 worth of merchandise from successful sales. Those sales brought in demo’s which resulted in Metallica coming to us. We contacted them and invited them to do 12 shows here in the NJ area as Marsha and I were also promoting shows. Metallica came and did those shows and from there we started talking about putting out a record. No one wanted to put this thing out so we decided to do it ourselves and started Megaforce Records. The label through its licensing and such has gone on to sell about 40 million records. We have worked with everyone from Metallica and Anthrax to Warren Haynes and Ace Frehley. We also had the pleasure of signing Kings X. That was one of the labels proudest moments were signing that band.

AL: Was your wife Marsha always in to what you were doing?
JZ: Marsha was knee deep in everything with me. When we decided to open the shop we

were both working regular jobs and wanted to do something were we could at least make $500-$600 per week. We decided on buying and selling rare records and hoped we would make that money on the weekends at the store. From that everything just grew.

AL: Signing to Megaforce Records was really the first big step for Metallica. Knowing the band through their entire career how do you think they have evolved as a band?
JZ: The only way I think Metallica has evolved is that they have written more music and become fine craftsman at their tools. When I go and see Metallica these days I really don’t see much different from when we had the band. They are the same guys up on that stage and that’s what made them successful. They were the fans and the players and they never changed. I think now more than ever they resemble the band I first saw in the early 80’s.

AL: Can you tell us how the Benefit for SuperStorm Sandy Concert first came about?
JZ: Everything really started through Facebook. We just decided to get on their in December and we got in touch with the Old Bridge Metal Militia through there. They started talking about wanting to do some sort of reunion or party. Marsha and I talked about it after having this dream one night that really put things in motion. Marsha said “Let’s do it!” so we posted on Facebook “Let’s do it!” Things just blew up and we received between 200-300 comments. The line up for the show came together very fast as we have known Raven and Anvil for many years. They agreed to come and then Rockin’ Ray from the Old Bridge Metal Militia mentioned he would like to have The Rods perform. I didn’t even know they were still together. It took me about a week to track down Carl Canedy who is the drummer for The Rods and after a few days those guys agreed to be a part of things. We first looked at The Stone Pony in Asbury Park as a venue. That place holds about 800 people and we were looking to draw around 500. The date of May 11th got announced and we then signed on for a bigger venue in Freehold that holds 1,800 people. We didn’t know how we were going to fill it. Next thing I know I am talking with Eddie Trunk from “That Metal Show” about how

Twisted Sister were looking to do something like this in NJ. The next day I got a call from JJ French asking if we had room for them on the bill. Tickets have been selling well and even before we started promoting we had 800 tickets sold virally. We are now close to sold out. The other cool thing to come out of this at 12:55pm on the same night TT Quick will be doing a reunion show which is going to be just killer. Also the band Lord’s of Mercy who are opening that show are a great act as well. It is going to be one hell of a night!

AL: Where you and Marsha always aware of the Old Bridge Metal Militia?
JZ: Oh yeah. We have been aware of them from the very beginning. Rockin’ Ray always used to come in to Rock and Roll Heaven and by anywhere from 10-20 albums at a time. He would drop like $200 every Friday on records. We asked him one time what was going on and he invited Marsha and I to a party he was throwing. These parties ended up getting really big as they had this giant PA system that required them to pad the walls so the neighbors wouldn’t call the cops. These guys would have private shows in their basement with bands like Slayer and Metallica. Parts of Metallica’s “Ride the Lightning” album was written at Metal Joe’s house when the band was in town.

AL: How did the idea to make the show a benefit come about?
JZ: That was Marsha. She and I were always discussing what we could do for New Jersey as they had done so much for us. We decided to give the money to charity which made everyone happy. Everyone who is involved with this event is working for free. 100% of the profits made from this show will be donated directly to the people. We hope to raise around $50,000 and if we do we are going to do a bunch of $100 gift cards to Home Depot so people can take those and get the things they need to repair their homes. We are just going to knock on doors and give people these cards to help make repairs on their homes that were damaged during the storm.

AL: Can you tell us about some of the amazing raffles that also will be going on during the show?
JZ: People are going to be able to walk away with guitars like you have never seen. We have Tom Araya of Slayer’s signature bass signed by the entire band including the late Jeff Hanneman. We also have a couple custom Oktober Guitars up for raffle as well. Stuff has been coming in everyday. Just recently we received a Jackson guitar signed by Anthrax and last night we got word from Metallica that they also will be sending a signed guitar and Lars is sending a signed drum head. The people who win these raffles will have to sign a disclaimer stating they will not sell them on EBay the following day or they will need to be returned to the Old Bridge Metal Militia. We really don’t want to see this stuff selling on EBay the next day.

AL: Do you and Marsha see yourself getting back in to putting on shows again?
JZ: Well I have to tell you my mind is very fragile you see so we will have to see how we do during this show and take things from there. Bands and people are coming from all over the world for this thing. It’s a real throw back to how things were in the 80’s and I don’t think you will ever see another one like unless we do it again. You never know what Marsha and I may walk in to next.