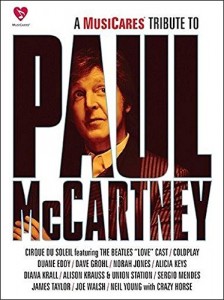 “A MusiCares Tribute to Paul McCartney” is a collection of never-before-seen performances by a slate of all-star artists ranging from Alicia Keys and Coldplay to Neil Young, James Taylor and McCarty himself. The songs all pay tribute to Sir Paul McCartney an artist whose lasting impression in music and on the world as a whole is unmatched. Proceeds from the sale of the disc will provide essential support for MusiCares, which ensures that music people have a place to turn in times of financial, medical and personal need. If you are a fan of The Beatles and Paul McCartney the latest release from Shout Factory has you covered. “A MusiCares Tribute to Paul McCartney” has some of today’s hottest artist combined with legendary performers which I found gives this release something really special.

Presented in beautiful 1080p Hi-Definition with DTS-HD sound you are getting the best sound and picture quality available which only adds to incredible performances such as Alicia Keys rendition of “Blackbird” to James Taylor and Diana Krall’s version of “Yesterday”. Probably my personal favorite of the whole performance is that of Paul McCarty, Dave Grohl and Joe Walsh. The three artists seem to mess flawlessly creating a performance every music lover has to experience.

Though the disc doesn’t really include any special features or additional content I found the concert to be strong enough to stand on its own with no real need for extra footage though it would have been cool to see what was going on behind the scenes and possibly some of the rehearsal footage. That aside proceeds from this release will be donated to MusiCares which is a great organization that helps musicians in their times of need so they can keep providing us with the music we love. If you want to get a great performance you can watch over and over again while supporting an equally great cause then this is the release for you. 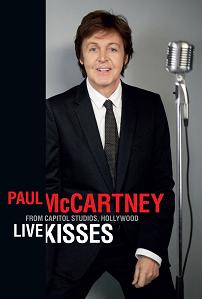 Paul McCartney is showing no signs of slowing down since his days The Beatles. This latest DVD release is a capture of one of the most intimate concerts as he performs his songs from his critically acclaimed album “Kisses On The Bottom”.  It was recorded and filmed at Capitol Studios in Los Angeles, February 2012.  The new album has this simple yet addicting factor to it.  I have been listening to it on loop since it’s release.  It has every inspired art creations from my mother-in-law from the track “The Inch Worm”. The release is another gem from Eagle Rock and a must purchase for all Beatles and fans of McCarthy.

The packaging on this release is very notable as well.  The DVD comes in a really great book format including spectacular a sweet 40 page hardback book, which features an extensive collection of photographs from the event and rehearsals. This concert includes 13 tracks from the album and also reunites McCartney with the all-star musicians who joined him to record the album originally. The audio and video on the DVD are great and really capture the charm from this very intimate concert film.

Official Premise: Live Kisses captures Paul McCartney performing the songs from his acclaimed Kisses On The Bottom album live from the legendary Capitol Studios in Hollywood. Paul is joined by a virtuoso group of musicians led by Diana Krall on the piano in these sparkling renditions of classic songs from the American songbook and the wonderful new song My Valentine. In between the songs there are interview clips with Paul, Diana Krall and many of those involved in the recording of the Kisses On The Bottom album. This is an intimate and charming performance which adds yet another facet to Paul McCartney’s already broad canvas of talents.

The special features included are quite impressive as well.  There are six different versions of the “My Valentine” music video, which are directed by Paul McCartney and starring Johnny Depp and Natalie Portman.  There is a featurette on the “Making My Valentine”. There are two short films with behind-the-scenes footage filmed at the album photoshoot for “Kisses On The Bottom”. Lastly there is an interview with Paul McCartney and producer Tommy LiPuma discussing “Kisses on the Bottom”. 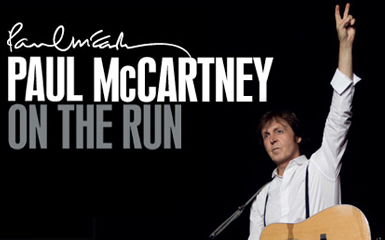 Even at age 70 Paul McCartney can bounce around like a youngster.  Despite a trip off of a riser towards the end of the show (Macca quickly hopped up, struck a pose and began his guitar duel with Rusty Anderson and Brian Ray on the solo riffs during “The End”) McCartney and company played for a solid 3 hours, introducing some new Beatles and Wings songs to their live catalog.

After taking the summer off, St. Louis saw the beginning of the second leg of the “On the Run” tour.  The Fab Five (besides McCartney, Anderson and Ray the group included longtime members Paul “Wix” Wickens (Keyboards) and drummer Abe Laboriel, Jr.) kicked off the show with “Magical Mystery Tour.” before sliding into “Junior’s Farm.”  After a rousing “Drive My Car” – with the audience supplying the “Beep, beep, beep, beep, beep YEAHS – McCartney removed his jacket.  As the woman in the crowd began to “Woo” he smiled and informed them “That is the wardrobe change of the evening.”

With a playlist full of Beatles and Wings classics, the band managed to sneak in some lesser known songs, including “Sing the Changes” (The Firemen) and “My Valentine,” a song McCartney recently penned for his wife, Nancy.  After the first group of songs McCartney held aloft what has to be the most recognizable musical instrument in the history of rock and roll:  his Hofner 500/1 violin bass.  Later in the show McCartney strapped on his old Epiphone Casino guitar to introduce the song he wrote on it, “Paperback Writer.”  There were other song snippets played as well.  “Let Me Roll It” ended with a quick, loud snippet of “Foxy Lady,” with McCartney giving a quick shout out to the other left handed musical genius, Jimi Hendrix.  Later, during “A Day in the Life” the song evolved into an audience inducing “Give Peace a Chance.”  He also paid tribute to his former Beatles mates no longer with us.  A touching accoustic “Here Today,” a song he wrote to John Lennon, had him brushing away a tear at the end while a simple version of “Something” on a ukulele given to him by George Harrison ended as a full blown rendition.

As with everytime I’ve seen McCartney (this makes number six since the 1980s), his back up band was tight.  But even they are not above reproach.  Deducting that Rusty Anderson had made a minor mistake during his solo on “And I Love Her,” Paul admonished him and had him play just the solo over again.  And I’m pleased to say that the one song I’ve wanted to hear live and never have, “Maybe I’m Amazed,” was finally played.  I can now die happy!

The audience was packed with music fans of all ages – from senior citizens to teenagers to a young boy in his stroller whose parents were staying in the same hotel we were.  He may not remember the music he heard but years from now he can proudly tell people that he saw Paul McCartney live!

SET LIST
Magical Mystery Tour, Junior’s Farm, All My Loving, Jet, Drive My Car, Sing the Changes, The Night Before, Let Me Roll It/Foxy Lady, Paperback Writer, The Long and Winding Road, Nineteen Hundred and Eighty-Five, Maybe I’m Amazed, I’ve Just Seen a Face, And I Love Her, My Valentine, Blackbird, Here Today, Dance Tonight, Mrs. Vandebilt, Eleanor Rigby, Something, Band on the Run, Ob-La-Di, Ob-La-Da, Back in the U.S.S.R., I’ve Got a Feeling, A Day in the Life/Give Peace a Chance, Let It Be, Live and Let Die, Hey Jude.