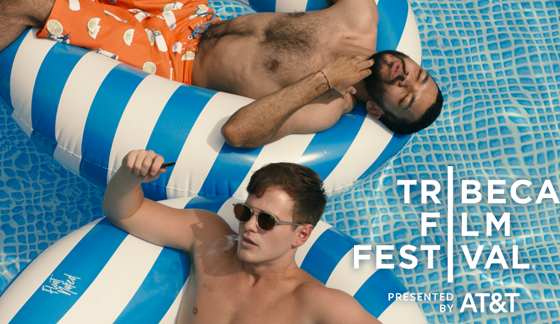 Among the sections I most look forward to each year at the Tribeca Film Festival are the comedy shorts. This year the lineup, titled collectively under “LOL” were presented online in lieu of the postponed festival. Here are my thoughts on this year’s program:

Personal Favorite: I Can Change!

Jim Jenkins’s plays with time travel creatively and with perfect deployment of brief special effects. John Hoogenakker stars as a groom who is gifted the ability to stop time and uses it ostensibly to “better” himself for his bride-to-bride. How? Well he freezes his bride and their friends in time at their wedding chapel while he disappears to the outside world for a blink of an eye and returns a whole new man having spent the time, for example, training to be a doctor. The simplistic way the “time travel” is achieved recalls some of the clever shortcuts something like Bill & Ted used–ie just stating their time travel intent means we immediately get to the consequences, sparing us the time trip. The pacing of the escalation in Hoogenakker’s jumps until the film taps into a big sci-fi finale is really fun.

Jay and Alex spend nine minutes mulling over sexuality–both their own and its larger place in society–as they hang out. It’s nothing Earth shattering, but the natural rapport between the two leads (Justice Smith and Graham Patrick Martin) is really charming and it’s nice to see a pair of young guys just delving into their thoughts on the matter not in some overwrought or homophobic manner, but just chilling, and with enough friendly mocking to keep things funny. And to bolster this strong duo, you also get a brief run in with Call Me By Your Name’s Armie Hammer!

Walton Goggins stars as a disgraced cowboy car pitchman John Bronco in a star-studded, but overlong mockumentary. I was excited for this one, generally always glad to see Goggins get to play over the top, but the film gets to the core of what the joke is with John Bronco relatively early and hammers on it over and over instead of advancing the plot. It’s 36 minute runtime could have been halved and achieve the same beats, though I understand why the filmmakers may have been reticent to cut any of the big cameos they got. Kudos for getting the MicroMachines pitchman (John Moschitta Jr) back on screen with his rapid-fire speech patterns though!

Additional program titles included the clever meet cute of One Last Heist–a romcom wrapped in a robbery from Canada, A Piece of Cake starring “Glow’s” Rich Sommer as a desperate dad and Egg which takes viewers from a simple diner and spirals it into a grand adventure.

Note: Though the 2020 Festival was officially postponed due to ongoing pandemic precautions, online screeners and the fest’s press library mean we can still offer coverage of this year’s selections while looking forward to getting back to the fest in the future!
Check out all our TFF 2020 coverage HERE

CULVER CITY, Calif. (September 12, 2017) – Be the movie night hero and bring home the film that kids give two thumbs up to for the ultimate kid’s movie night! It’s time to express yourself when Sony Pictures Animation’s THE EMOJI MOVIE arrives for the first time on Digital on October 10 and on 4K Ultra HD+ Blu-ray + Digital, Blu-ray + Digital and DVD October 24 from Sony Pictures Home Entertainment. The animated comedy unlocks the never-before-seen secret world inside your smartphone. Hidden within the messaging app is Textopolis, a bustling city where all your favorite emojis live, hoping to be selected by the phone’s user. In this world, each emoji has only one facial expression – except for Gene (T.J. Miller), an exuberant emoji who was born without a filter and is bursting with multiple expressions. Determined to become “normal” like the other emojis, Gene enlists the help of his handy best friend Hi-5 (James Corden) and the notorious code breaker emoji Jailbreak (Anna Faris). Together, they embark on an epic “app-venture” through the apps on the phone, each its own wild and fun world, to find the code that will fix Gene. But when a greater danger threatens the phone, the fate of all emojis depends on these three unlikely friends who must save their world before it’s deleted forever.

THE EMOJI MOVIE is filled with interactive bonus materials on the Blu-ray, 4K Ultra HD, DVD and digital releases that are fun for the entire family to enjoy including the “Good Vibrations” Dance Along and Lyric Video, where you can join along in the dance party. You can tell that they don’t spare any expense with video production either. Learn about the amazing dance moves from the film’s celebrity choreographer in “Choreographing Emoji with Matt Steffanina.” Get creative with step-by-step tutorials on how to draw your favorite Emoji’s with two “how to” videos. Go behind-the-scenes of a real-life coding school with the “Girls Who Code” featurette, and get to know everything about the all-star cast in “Express Yourself: Meet the Cast.” Fans will also get to unveil more of the story behind their beloved character in “Jailbreak Decoded: The Untold Story.” Additional featurettes include “Creating the World Inside Your Phone,” “Bringing Emoji’s to Life,” and the very exciting “Puppy! An Original Hotel Transylvania Short.”

In addition to extra content above, exclusive to Blu-ray, fans of all ages will be able to give it their best shot at the “Gimme a Hand! Guess the Emoji Game,” where Hi-5 and Smiler give you clues to help you guess the mystery Emojis. You will also have the chance to get creative with your Halloween Trick-Or-Treat candy with “Sweet App-etite: Make Your Own Candy Crush Inspired Saga Cake.”

Blu-ray Exclusive Bonus Materials Include:
Everything listed above, plus:
• Gimme a Hand! Guess the Emoji Game
• Sweet App-etite: Make Your Own Candy Crush Inspired Saga Cake

THE EMOJI MOVIE has a run time of approximately 91 minutes and is rated PG: for Rude Humor.

ABOUT SONY PICTURES ANIMATION
Sony Pictures Animation produces a variety of animated and family entertainment for audiences around the world. The studio is following its worldwide comedy hits—the record-breaking monster comedies Hotel Transylvania and Hotel Transylvania 2, the hybrid live action/animated blockbusters The Smurfs and The Smurfs 2, and the mouth-watering Cloudy with a Chance of Meatballs movies—with the fully animated reboot Smurfs: The Lost Village available on digital and Blu-ray now; a surprising and comic take at the secret world inside our phones with The Emoji Movie in July 2017; the inspirational The Star in November 2017; Hotel Transylvania 3 in July 2018; and an animated Spider-Man feature from the minds of directors Chris Miller and Phil Lord in December 2018. The studio, in conjunction with Aardman Animations, has produced two critically acclaimed feature films: the CG-animated family comedy Arthur Christmas; and the Academy Award® nominated stop-frame animated high-seas adventure, The Pirates! Band of Misfits. In 2007, Surf’s Up also received an Academy Award® nomination for Best Animated Feature Film; a sequel entitled Surf’s Up 2: WaveMania is now available on digital and DVD. The division, whose first feature film Open Season led to a very successful movie franchise including the brand new Open Season: Scared Sillynow available on digital, DVD and Blu-ray, was founded in 2002. Sony Pictures Animation is a division of the Sony Pictures Motion Pictures Group.

I think Lisa Azuelos should have thought twice before remaking her own 2008 feature “Laughing Out Loud”. Miley Cyrus is not what she was when she was on “Hannah Montana” and Demi Moore…well, is anyone excited by her anymore? The film really tries to be a modern day “Clueless” for this generation but without the comedy and bright colors. They even used the same song but in French Supergrass’s “Alright”. Nice Try but sorry…epic fail! Best part was the films co-stars including Thomas Jane, Ashley Greene and Gina Gershon.

In today’s world of Facebook, Twitter and YouTube, Miley Cyrus starts as a teen girl dealing with the peer pressures of high school romance and friendship, all while dodging her protective mother (Demi Moore). This film is a coming-of-age comedy, hold the comedy and the coming-of-age.

The film looks decent on Blu-ray and comes with a shocking DTS-HD Master Audio 7.1, which is completed wasted. The special features included are an audio commentary with director Lisa Azuelos and cast members Ashley Hinshaw & Lina Esco, I guess Miley was getting her nails done. Lastly there are three short behind-the-scenes featurettes including “The Cast of LOL”, “Like Mother, Like Daughter” and “Lots of Love For Lisa Azuelos”.