MG: How did you prepare for your role in “I Spit on Your Grave”?
CL: I was cast about two weeks before we started shooting. I don’t know how we prepared for that. I just tried to keep things close to heart and represent the character the best I could. The character is mentally challenged and I wanted to do that role honestly. I also wanted the audience to feel compassion for the character as much as they could. When you are shooting material like that there is not a lot of acting involved. You are just reacting to the craziness that is going on around you. Everyone is just feeling each other. Hair was standing up on the backs of our necks. You don’t get that feeling every time you work on a project. We were highfrom the work. 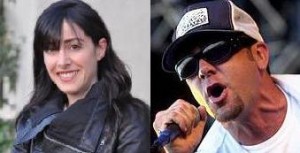 Andrea Blaugrund Nevins is the writer and director of a new documentary titled “The Other F Word”. The documentary focuses on punk rock musicians and the difficulties they face as fathers. Jim Lindberg is a founding member of the California punk rock band Pennywise. Jim and the band have a very prominent role in the documentary which is based of of Jim’s book “Punk Rock Dad”. Media Mikes had a chance to talk with Andrea and Jim about the film.

Adam Lawton: Can You tell us how the idea for the film came about?
Andrea Blaugrund Nevins: Jimmy had put out a book titled “Punk Rock Dad”. I thought the book would be a great premise for a documentary. Jimmy had a lot of stuff going on at the time as Pennywise had a new album coming out and they were going on tour so everything tied in really well.

AL: What made you interested in writing the book?
Jim Lindberg: I have always been into writing and do quite a bit of it. I had the idea to put the book together about being in a band and being a father at the same time. We were throwing around ideas for titles and one of my friends said I should call it “Punk Rock Dad”.

AL: How long did you film for?
ABN: I think we filmed for about a year and a half. Jim was out on tour so we just kept adding footage. We also gave Jim a hand held camera which he used to capture some really great POV stuff.

AL: How did you decide who was going to be in the film?
ABN: Everyone who was in the film pretty much got involved through word of mouth. We would interview one person and they would say “oh you have to check out so an so”. We would go and interview them and then they would tell us about another great person to talk with. We really got a great group of people.
JL: It was great to have guys like Tony Hawk who don’t have the typical “punk rock” look however are still part of the scene. i myself don’t have tattoos or wear a leather jacket as I was never really into the look of punk rock. What drew me to the scene was the music. It was great to have guys like me shown along with the typical punk rock looking guys.

AL: Was it hard being filmed during the time of you leaving the band?
JL: I had told one of the guys in the band that I wasn’t sure how much longer I could keep doing what we were doing. They had some knowledge that I was unhappy so it probably wasn’t as big of as a surprise to them when I did decide to leave. There was one point where I just threw my hands up and said that was it.
ABN: We tried to only show certain things. We weren’t filming 24/7 like a reality show. Even though we shot off and on for over a year the cameras weren’t around as much as it seems.

AL: Have you had any communication with the band?
JL: No. I have tried to reach out to them but haven’t heard anything. I would have liked for everything to be good between me and the guys. I offered to help them out in anyway I could. I even offered to help them find a replacement but things just didn’t work out that way.

AL: Looking back on the footage do you have any regrets?
JL: I regret wiping out on that skateboard. (Laughs) I told the to burry that film and to never show it but it some how ended up making it into the film.

AL: What are the release plans for the film?
ABN: The film opened in a few cities on 11/4. It was kind of a slow weekend release wise which was good for the film. It opens in Pasadena and Costa Mesa on 11/11. We also are in the works of distribution in Canada and overseas. Once the film has run its course in the theaters it will be airing on Showtime and the DVD is slated for a spring 2012 release.

AL: Do you both have any other upcoming projects?
JL: I have a new band called The Black Pacific. We are currently writing songs and playing shows. I was actually able to squeeze two of the bands song on the films sound track. I have just a lot of cool stuff going on. I am at the first part of my second life.
ABN: The DVD is going to have some sneak previews of the new band in the special features section. Project wise I am looking right now at making a documentary about someone who is trying to reconcile their ego after being out of the spot light. It sort of the next phase when you are forced to remove yourself from the spotlight for one reason or another.

AL: Is the soundtrack from the film going to be release as well?
ABN: I would love too, however the economics don’t look to great. It’s something that we are still discussing though.

AL: Is there anything else you would like people to know about the film?
JL: For those who get the DVD when it comes out there is going to be a lot of extras to check out. The material has been packaged really well. The Directors cut will feature some voice over stuff from Andrea, myself and Art Alexacis. That should be pretty informative and entertaining. You of course will be able to check out the film in the theaters and eventually on Showtime but for those people who really liked the film the hard copy is going to be really great.
ABN: While the film is in the theater we want people to use the whole DIY word of mouth method to promote the film. The more people who go to see it in the theaters the will allow it to be shown in more places. The film has really great 5.1 sound with a soundtrack that rocks! It will be awesome to see the film in the theater.