Julien Baker will release her third studio album, Little Oblivions, on February 26 via Matador Records. Last night she performed the first single from the album, “Faith Healer,” on The Late Show With Stephen Colbert. Captured in Nashville, it features Baker backed by a full band and represents the expanded sound that can be heard on the forthcoming album. “How does a songwriter hold on to honest vulnerability as her audience grows,” The New York Times pondered last week in its column on “11 Things To Look Forward to In 2021,” “She scales her music up to larger spaces, backed by a full rock band with ringing guitars and forceful drums. But she doesn’t hide behind them; she’s still ruthless and unsparing, particularly about herself.” Rolling Stone have noted “Little Oblivions‘ is not only the most richly produced, pop-aware release of Baker’s career, but also her the most unsparingly honest in its messiness” and of “Faith Healer” Vulture said, “Julien Baker remains devastating on new song “Faith Healer.”

Media Mikes has teamed up with their friends at Amazon Studios to give (25) readers and a guest the chance to be among the first to see the new film “Late Night.”

The film, starring Emma Thompson and Mandy Kalling, will be screened on Wednesday, June 5th at the AMC Studio 28 in Olathe, Kansas and will begin at 7:30 pm.

All you have to do is click HERE. The first (25) people to do so will receive a pass for (2) to attend the screening. This is a first come/first serve giveaway. When the allotted passes have been claimed, the giveaway is over. Good Luck! 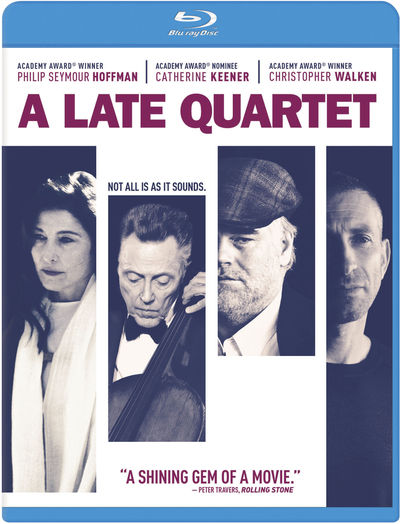 To celebrate the home release of “A Late Quartet”, Media Mikes would like to giveaway TWO copies of the Blu-ray. If you would like to enter for your chance to win one of these great prizes, please leave us a comment below or send us an email indicating your favorite type of music and why. This giveaway will remain open until February 15th at Noon, Eastern Time. This is open to residents of the United States only. One entry per person, per household. All other entries will be considered invalid. Media Mikes will randomly select winners. Winners will be alerted via email.

Academy Award® Winners Christopher Walken and Philip Seymour Hoffman strike all the right chords with Academy Award® Nominee Catherine Keener and Mark Ivanir in this powerful story that blends raw emotion with fiery passion to form an unforgettable cinematic masterpiece. After 25 years together, the members of a world-renowned string quartet learn that their beloved cellist (Walken) may soon be forced to retire. But the news stirs up equally painful challenges when competing egos, harbored resentment, and irrepressible lust threaten to derail the group as they struggleto maintain harmony in their music  and their lives.

Check out the wonderful interactive piece of sheet music from Beethoven’s Opus 131, the piece featured in the film. Each of the seven movements are represented by music and a clip that relates from the film as the music piece reflects what’s happening in the characters’ lives!

When I saw the cast for this film I was immediately drawn.  I mean you’ve got both Academy Award Winners Christopher Walken and Philip Seymour Hoffman, who are absolutely brilliant in this film.  They have also had very strong years with “Seven Psychopaths” and “The Master”, respectively.  Also Academy Award Nominee Catherine Keener takes the stage with force. The film is very powerful and packs an intense passion of music.  I am a sucker for anything when it comes to music.  Something about it really speaks to me…maybe it is my yearning to be a musician myself.  Well if you are looking for a great piece that you probably missed in it brief theatrical release, I would recommend giving this a watch for sure.

Official Premise: After 25 years together, the members of a world-renowned string quartet learn that their beloved cellist (Walken) may soon be forced to retire. But the news stirs up equally painful challenges when competing egos, harbored resentment, and irrepressible lust threaten to derail the group as they struggle to maintain harmony in their music – and their lives.

20th Century Fox has delivered a nice Blu-ray presentation on this release.  It is just a sngle disc Blu-ray no DVD combo.  The 1080p looks very crisp and sharp, within its original aspect ratio of 2.39:1.  Since the film is about music, I was really hoping for a smashing audio track and it was delivered here with its DTS-HD Master Audio 5.1.  Works well with both the dialogue heavy scenes and the music as well.  The special features is where this release fails. There is only one short featurette called “Discord and Harmony”.  I would have loved to seen a commentary track with the director and this wonderful cast.