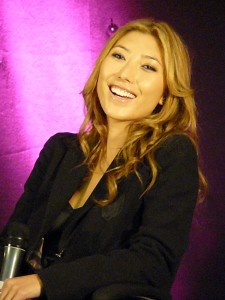 Dichen Lachman is best know for her work in Joss Whedon’s science fiction drama TV show “Dollhouse” as Sierra. She also played Suren in Syfy’s hit series “Being Human”. Her latest film is “Lust for Love”, which is directed by Anton King and reunites her with a lot of cast from “Dollhouse”. Media Mikes had a chance to chat about the film with Dichen and what was it like working with friends.

Mike Gencarelli: How did you get involved to star in “Lust for Love”?
Dichen Lachman: I don’t know if a lot of people know this but Anton (King), the writer/director, and I used to be in a relationship. We moved to LA and were together for a very long time. Anyways, life happens and we went our separate ways. He went off to Vietnam to write scripts. We kept in touch and he ended up sending me “Lust for Love” and I really liked it. It was really fun, clever and quirky. He suggested that maybe we could make it. I thought that would be great but making a movie is very complex. Even though I have been working in the business for so long, I didn’t even know where to begin. All of the cast from “Dollhouse” all became very close friends over the two years we worked together and then on. I was invited into that “Whedon” world through Joss and my work on the show. So, I thought if we did it with our friends it would be fun.

MG: Tell us about funding the film on Kickstarter?
DL: Anton mentioned Kickstarter and we decided to look into that and we were able to raise some of the budget there thanks to the fans. The first and most important part was if our friends even wanted to be involved at all. I always thought that Fran (Kranz) would be great as Astor. I thought that he could bring something that wasn’t on the page. So we asked him to read it and he really liked it and it just grew from there. Our first table read was so much fun and it gave us the energy to keep going. Once we brought on a group of people, who thought it was a fun script, that is when we proceeded with the Kickstarter. If our friends didn’t respond it would have diminished the desire to move forward. Since they enjoyed it so much, we knew we had to do it!

MG: What was it like get back together with your crew from “Dollhouse”?
DL: It was so much fun. We would always hang out together after the show but it felt like we were hanging on to something that we lost. We got so close during our time on “Dollhouse” that it was extremely fun to revisit that place. The feeling that you have when you are on set with friends and collaborating, don’t get me wrong it was extremely difficult making this movie, but it was also very rewarding. Those moments you catch where you are doing a scene and you can’t get through it because you are laughing are wonderful.

MG: Yeah! I was going to ask, when you are working with friends like Fran; do you find it harder to focus especially for the dramatic scenes?
DL: Working with Fran is an experience that every actor should have the privilege of. He is a wonderful actor and person. It is just an extreme amount of fun. It is very difficult to get through a scene with Fran without laughing. There is one scene in the movie when we are sitting on the steps and trying so hard not to laugh. He is just riffing and bringing this life to the character that wasn’t there and because I didn’t read it, it is unexpected and spontaneous. It is so wonderful.

MG: What did you enjoy most about playing Cali?
DL: She was a great character because she is not typical. She is rather resistance to the whole romantic side of things, which I liked. She is also very practical. So acting while also producing on this project was probably one of the hardest things that I have ever done. You are trying to inhabit a character and then at the same time worrying if the caterer is going to arrive on time. I don’t know if that helped my performance since it got me out of my head and just made me do it. I didn’t have the distraction of doing too much acting. She was a really fun character and I liked her relationship with Fran a lot. She is also not a girl’s girl either and I liked that. She was like one of the guys and it was really fun to be in that place.

MG: You mentioned producing, is that something you plan to do more?
DL: I would love to, yeah! I have so much more respect for people that do that job now. It is one of those things that you have to understand every department. It is extremely difficult. We did have an incredible team though, Jack Wylson was so key and worked so hard with the other producers as well in terms of making this flow right. So I would like to do it again but I am not sure I would do it the same way though. I am excited and I hope that this opportunity will help me do more.

MG: I am not really a huge fan of romantic comedies but I was really surprised with this film and enjoyed it a lot!
DL: You can’t imagine how happy that makes me. It is definitely different and quirky. I think for people that ordinarily don’t enjoy rom-coms, there is something about this one that will speak to them.

MG: What can you tell us about your role in The CW’s “The Hundred”?
DL: I can tell you that how it came about because two writers from “Dollhouse”, Liz (Craft) and Sarah (Fain) asked me if I wanted to come play on this show. I said “Of course”. Jason (Rothenberg), the creator, is super talented and such a great writer. I spoke with him recently and he told me that “People have been asking me about your character on the show, make sure that you do not tell anyone about who you are playing” [laughs]. So in terms of that I guess I can’t say much. But I think people are really going to really respond to the show and that everyone involved is really excited about it. It is very dark, especially for The CW. I know they have stuff like “The Vampire Diaries” but this takes it another step further. After the pilot, it takes some really exciting turns, so I would say stick with it. I am very lucky to be a part of it. 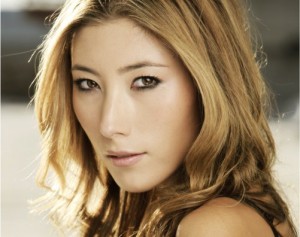 Dichen Lachman appeared in season two of Syfy’s “Being Human” playing the role of Suren. Dichen is also known for her role in the TV series “Dollhouse”. Media Mikes had a chance to chat with Dichen about her role in “Being Human” and what she has planned next.

Mike Gencarelli: What did you enjoy most about working on “Being Human”?
Dichen Lachman: I think playing a vampire is one of those things that are very appealing as an actor. You get to explore the shadows. You also get to dress up and go into that fantastical world. It’s such a gift.

MG: How did you prepare for your role on the show?
DL: The make-up and effects help you get into character a lot. What I did was I discovered a specific dialect that Suren spoke in. I worked with an incredible dialect coach. With the creators of the show we discussed how Suren should sound. That was probably the most challenging thing. In the end we were able to find something that everyone liked. You can tell I sound quite different playing that character.

MG: What was the best part for you working with Sam Witwer?
DL: He is great! Sam is so funny as are all of the cast members. They are great actors. It’s very refreshing to work and have fun at the same time. It’s amazing that they are able to snap back in and out of working so quickly.

MG: Do you have a favorite episode that you worked on?
DL: I loved doing the flashback stuff. It’s very rare that someone like me gets to do something like that. I don’t get to play people from the 1920’s and 30’s. It just doesn’t happen. For me to be in that world was remarkable. The costumes and set designs were so good. I was really excited to be able to do that.

MG: have there been any talks about doing flashback scenes in the upcoming season?
DL: I am not sure. I think it might depend on my availability and where they want to take the story. I would go back to Montreal to work with those guys in a heartbeat. Everyone involved with that show is great.

MG: How does this show compare to another show you have worked on “Dollhouse”?
DL: It’s hard to compare them. They are both sort of in that fantasy world. You are still dealing with real world issues but in a roundabout way. For me the only real difference was that I was working in another country. People were speaking French. I remember working on a scene and turning around and everyone had just left. I didn’t know what was happening. They had called lunch in French and I had no idea. It was strange to be on a set where for the most part everyone was speaking French. It was a total trip at first but I got used to it. It was strange but awesome.

MG: Can you tell us about your upcoming pilot “Last Resort”?
DL: “Last Resort” is very exciting! I think people are going to like it and I hope it gets picked up. I may be doing a film called “Too Late” which I hope will start shooting in May. I also am in post production for a film I produced titled “Lust for Love” which stars Fran Kranz from “Cabin in the Woods”. It is a very busy time but it is good and totally worth it.

MG: Do you have any plans to do more producing in the future?
DL: I think so. The world is changing and people are getting content in more ways than ever. Things have been going this way for some time now. I think more now than ever the internet and television are converging. We just have to start making our own things. It’s inevitable. I am still going to be working on other projects an auditioning. It’s important for us as actors to make things our fans want to see. It’s getting increasingly harder to make studio films that are going to make lots of money. Films have to be a 3 dimensional fire fest to get people to go to the cinema.