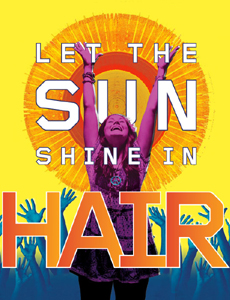 What I enjoyed more than anything else at this performance was watching the audience. You could see the majority of the crowd were the same age as the cast during the”age of Aquarius” Being 28 I really got a kick watching the sixty-somethings with their gray hair and tied ties, now seemingly professional and clean cut, as they filled the auditorium. You could see them having literal flashbacks as the show progressed. A good laugh here at free love, a snicker there at a reference to “getting stoned” and even a whispered conversation between husband and wife during the song “Hashish” (the only lyrics being the various drugs popular in the 1960s) ending with an audible laugh. By the end of the show the audience was captivated by the story, the music and the cast. The show ends with a grand performance of “Let the Sun Shine In” with the cast inviting the audience to join in the fun and dance with them on stage. 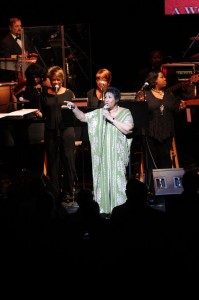 A few years ago, “Rolling Stone” magazine published a list of the 100 greatest voices in rock and roll history.  No surprise that number one went to the Queen of Soul herself, Ms. Aretha Franklin.  At the beautiful Kauffman Center in Kansas City, her majesty held court for a sold out audience.  And she didn’t disappoint.

Cloaked in a fur coat and carrying her pocketbook, as if she was just stopping by to say hello, Ms. Franklin opened her show with a rousing version of Jackie Wilson’s “(Your Love Has Lifted Me) Higher and Higher.”  For the next hour and a half she regaled the audience with many of her hits (“Think,” “Chain of Fools”) as well as some surprises.

The show went off without a hitch.  Almost.  After her second number Ms. Franklin requested that the stage airconditioning be turned off, threatening to leave the stage if it wasn’t.  “I came to give Kansas City my best performance,” she informed the unknown tech, again requesting the a/c be cut.  Thankfully for all in attendance it was.  Later in the show one of her bracelets fell off.  She eventually enlisted the help of her band director, who refastened it to much applause.

Ms. Franklin was in fine voice, hitting all of the notes the audience expected.  She kicked off the second act of her show by sitting down at the piano and paying tribute to one of her mentors, the late, great Sam Cooke.  While images of Cooke were shown on the video screen, Ms. Franklin sang one of Cooke’s biggest hits, “You Send Me.”  “Jesus” she said, as shots of the handsome Cooke filled the screen, “he was a fine man!”  She followed up with a moving tribute

to the late Whitney Houston, singing a few bars of “I Will Always Love You.”  She concluded the second act with an audience favorite, “Freeway of Love.”

For her encore she informed the audience that the other night she had seen one of her five favorite films on television (among her favorites: “Dr. Zhivago,” “The Thomas Crown Affair” and “Lady Sings the Blues.”  I can only assume one of them is “The Blues Brothers.”)  She then delivered a moving version of “The Way We Were.”  She concluded the evening with her signature number, “Respect.”

On a side note, I must add here that this was my first visit to the Kauffman Center for the Performing Arts and it was easily one of the most beautiful venues I’ve attended an event at, The complex, along with the Sprint Center, is one of the crown jewels in Kansas City’s performing arts crown.

SET LIST:  (Your Love Is Lifting Me) Higher and Higher, Share Your Love with Me, Think, Baby I Love You, Something He Can Feel, Chain of Fools, Ain’t No Way, Instrumental Highlights (the band was TIGHT), Find Me An Angel, Help Me Lift Him Up, You Send Me, I Will Always Love You, Freeway of Love.  ENCORE:  The Way We Were, Respect.