You may be a marijuana critic, but one undeniable fact is that the substance does have several benefits. Whether it is the medicinal or recreational marijuana, the benefits are clear, and it should be a debate based on the risk-benefit ratio. Several states have realized the importance of marijuana leading to its legalization. Such countries now enjoy economic benefits associated with the industry projected to hit $13.3 billion in the US in 2020. Pot can be a source of employment as well as revenue. Here are the lucrative job created by the marijuana boom

Marijuana is one cash crop with handsome returns that should be commercialized. Even though it is called weed, hemp requires specific conditions to grow optimally and give good produce. You have to carry out tillage practices and proper harvesting to ensure you get a bumper harvest. As such, large scale farming of cannabis will need a horticulturist to provide direction on the appropriate farming techniques. Besides, the director of cultivation should have managerial qualities since this is an intensive investment. The head grower will be responsible for planting, harvesting and monitoring the farm. This is a well-paying job in the states where medical marijuana is legal. Several companies are hiring qualified persons to take up this position.

Marketing is a crucial strategy in any business. You have to get your products in the market and make people believe that they are the best. The development of legal status in marijuana use has created a job for marijuana marketing agencies that seek to publicize the products. With the services of a good agency, you can be assured of better returns.

The required person for this job should be knowledgeable in botany and chemistry extraction methods. High level of expertise is required to ensure the extraction of high-quality marijuana. The individual should be able to distinguish the different species of cannabis from the look. They use solvent extraction techniques to obtain the active ingredient in Cannabis; THC. After extraction, the specialist will do quality control by determining potency and concentrations. An extraction scientist working in the marijuana industry can earn up to $125,000 annually.

There is much information that is still unclear about marijuana use both for recreation and medical purposes. You can take up this opportunity by specializing in the field and delivering valid information about the product. Answering peoples questions about using marijuana will earn you employment in hospitals or a private clinic. Knowing the state laws coupled with marijuana knowledge will make you a six-figure salary without many struggles.  Business owners will also form part of your client base if you work in private practice.

Marijuana shops are mushrooming all over in states that have legalized its use. One of the regulations requires that they have an officer in charge of the operations. You can take up a job as a chief operating officer or a chief financial officer in the shop and get fortunes overturned with a retirement benefit at the end of your tenure. The dispensary manager is responsible for overseeing cultivation processes, accounting services as well as other managerial roles in the company. Certified public accountants are preferred candidates in the business. 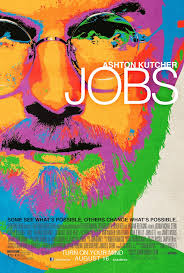 A lone figure walks down the halls at the Apple Computer campus. He enters the auditorium and takes center stage. He is about to reveal something that emphasizes the one rule he has for the company, that their projects touch the heart. With great fanfare he produces the small, handheld item that will hold and play 1,000 songs. “Ladies and Gentlemen, I give you the iPod!”

The time is 1974 (or, if you read the giant poster on the wall of the student union, 1972). No, really. It’s 1974. Reed College, to be precise. We meet Steve Jobs (Kutcher) as he crashes on a sofa. Restless, he has left school but still battles with the various ideas in his head. When we meet him a couple of years later he’s fighting with his co-workers at Atari. He tracks down his friend Steve Wozniak (Gad) and together they come up with an idea, a new kind of personal computer system that Jobs calls APPLE.

A true inside look at the life of one of the most influential people of the past century, “JOBS” details the highlights of Steve Jobs career, warts and all. As portrayed by Kutcher, he was not a likable person, constantly driven by his pursuit for perfection and the inner feelings of rejection he felt from being adopted. The latter is a subject that is only briefly touched on, which is surprising. Also surprising is the portrayal of Jobs as a man who denies the child that is obviously his, yet then names one of his biggest projects after the daughter in question (he eventually recognized her as his). Kutcher bears a striking resemblance to Jobs and manages to embody him in full. It is an often emotional performance that could have very easily been turned into a characterization. That being said, it should be noted that, if you look at the casting, Steve Jobs may have been the only attractive man in the computer business. The majority of characters that little the APPLE campus appear to have been cast from the attendees at a local sci-fi/fantasy con, complete with oversized glasses. Gad is very good as Wozniak, whose main objective is to invent things and have fun doing them. Supporting work by Dermot Mulroney, Matthew Modine, Leslie Ann Warren and Kevin Dunn, among others, is solid. J.K. Simmons, a normally great supporting actor, is quickly identified as the “villain” and plays the role to a tee.

Many of the highlights (and lowlights) of Jobs’ life are visited during the film, though surprisingly there is no mention made of his involvement in the creation and support of PIXAR Films, which is curious. That being said, “JOBS” is an entertaining look inside the mind of a genius. 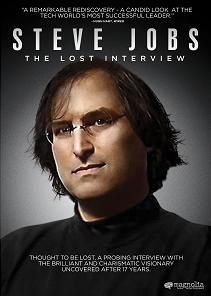 Steve Jobs is a man like Walt Disney.  He is a visionary that left us way too early. Like Disney himself, I am sure people said “I could only have imagined the things he would have thought up”.  Luckily, Jobs’ legacy will live on like Disney’s himself.  “Steve Jobs: The Lost Interview” is a 70 minute intimate chat with the man behind so many great things like Apple and Pixar.  What is most interesting about this is that it was conducted way before he took over Apple and made it what it is today.  It is fascinating to listen to Jobs talk about the future, knowing what how it turned out.  This was lost for 17 years and now thanks to Magnolia Home Entertainment we get a chance to behind-the-scenes to the early days with the late and great Steve Jobs.

Official Premise: In this candid, in-depth interview with the late visionary filmed in 1995, Steve Jobs discusses at length his early days, career battles, and vision for the future. Small portions of the piece were used for a television series at the time, but the vast majority was shelved and for 17 years thought to be lost. Resurfacing, it is being presented in its entirety, providing a fascinating look at Jobs at a particularly interesting moment in his career, two years before he would go on to retake control of Apple

The special features included on this DVD are quite impressive for a lost documentary.  This is not a memorial on his life, it is justlost interview.  So if you are looking for a life-story, then you are looking in the wrong place.  On the topic of the interview, there is a wonderful additional hour long interview with Andy Hertzfeld, the original Macintosh programmer at Apple.  It is a must-watch! There is an audio only interview with writer/presenter Robert X. Cringley, which is conducted by producer of this film, John Gau.  Lastly there is a commentary track also included over the interview with Robert X. Cringley and director/producer Paul Sen.  Each feature is better than the next and will leave you 100% satisfied.