Scott Durbin is one of the founding members of the popular kids television show and band “Imagination Movers”. They have a successfully show that currently airs on Disney Junior. They are also constanstly touring bringing their music to fans all over the world. Media Mikes had a chance to chat with Scott about their music, their tour plans for this summer and also what the future brings.

Mike Gencarelli: When you guys started “Imagination Movers” back in 2003, did you ever think that you would be still going this strong today?
Scott Durbin: I would have never imagined this that show would be seen in 50+ countries, translated in 12 languages and we are recognized around the world. For that part of it, I would say “Definitely no”. On the other side, we were so tenacious when we started. We believed that we wanted to create something to encourage creativity in kids, modeling problem-solving and create music for kids that challenged them and did not pacify them. This gets them off the couch and gets them moving around and also their brain moving. Even for parents, like yourself, we wanted to make it something that you could listen to over and over without starting to hate it. We also wanted to make it developmental and age appropriate, so it really connects with the kids. So that part of me says “Yes, I knew we were going to be a success”. We are coming from a real place and doing it for the right reasons.

MG: I love that you guys have such strong educational messages in your show and music while still being entertaining and having fun…
SD: I think it is important to balance them both. If there is too much entertainment it can become campy. If it is too educational, it can be a turn off. But if there is a good balance, you can get the best of both worlds. You can teach and the kids will enjoy learning. I started off teaching in elementary education for 10 years. So in those years that I taught, I saw this level of creativity in the kids was just decreasing and I saw this need for creativity. I think part of the reason why we began. We say that there was no “real people” in kid’s entertainment (going back over 10 years now) and we wanted to change that. We wanted to bring strong male role models to kids. As a teacher, you had a lot of kids that didn’t have a strong male role model at home and I found that having that was invaluable.

MG: You guys are touring all this summer and through the fall, tell us about what you enjoy most about performing live?
SD: Obviously, we have been so blessed with just being able to travel and meet our fans across the globe. We just got back from the UK. We recently did a show in Dubai. An interesting thing about Dubai is that about 80% of the people there are ex-pats from direct countries. The group that brought us over there told us that most of the Western acts they bring over there, potential 95% of the audience are expats other countries like Australia, UK, Canada, or the States. So essentially they are all Western, but when we played in Dubai the audience was Indian, Philippian, Saudi Arabian and the group that brought us in said that they have never seen the amount of diversity that we brought to one of their shows. So for us, I think being able and being accessible to such a diverse group of people makes it worth it. That was so special. It just showed how four dudes from Louisiana can resonate with a six year old from India. When we tour, we get to meet families and hear stories about how the music has affected them and that is so humbling. We are very fortunate to be able to participate in this. There is a certain glimmer of magic in what we get to do.

MG: On July 27th, you guys are playing after the Tampa Bay Rays game at Tropicana Field for a special Christmas in July concert; tell us about that?
SD: I am very excited for this. We got to do it last year and we are lucky enough to get to do it again. The hard part about this is that the Rays are playing the Red Socks. I have a real soft spot for the Rays since I have been following them much more but my dad was a huge Red Socks fan. So I grew up rooting for the Red Socks, so I am little torn here [laughs]. For the Christmas in July, we will probably play about 70 minutes and throw in some fun Christmas songs. We have a really interactive set and the kids have a lot of fun. It is actually really a family concert that moms and dads will enjoy as well. We play live music, so there is so much great energy going around.

MG: Your latest album “Back in Blue” was released last summer which includes second set of songs from season 3; do you have plans for new music?
SD: Yeah, that is a great question. The music industry is changing and how bands get music out to their fans are changing. “Back in Blue” was our first digital release only, so there was no hard copy available. That is something that was so new to us to think that we can’t give you a CD and you have to download it. There are so many great songs from that CD including “Robot Chase Song” and “Have You Ever Seen a Unicorn”. In fact, right now we are actually starting on our ninth album. We did an album called “Rock-o-matic” a few years back, which was a CD/DVD. We created about 35 minutes of additional content with videos, sketches etc and we are looking to do a follow up to that. This time we are going to get our fans to participate. They are also going to get to experience more of the making of the CD and DVD. If you “Like” our Facebook, you can find out more about this.

MG: There hasn’t been new episodes for over a year now; is there a fourth season in the horizon for the “Imagination Movers”?
SD: Right now, episodes are currently are airing on Disney Junior. I don’t know if a fourth season will ever be made. But we are currently working with a production company in Canada right now to create new “Movers” content… So I will leave that at that because I do not know how much I can say right now. Around the corner, don’t be surprised if you are seeing some new content. So we are very excited about that. 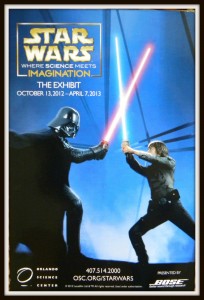 I first received a flyer for this exhibit while attending 2012’s Star Wars Celebration VI at the Orlando Convention Center. Being a life-long “Star Wars” fan, I was immediately interested.  Science mixed with fantasy? Where do I sign up.  This exhibit was developed by the Museum of Science in Boston along with the collaboration of Lucasfilm Ltd, which makes me more excited. “Star Wars: Where Science Meets Imagination” is not just a couple of props, it is a 10,000 square-foot exhibit that transports you into the world of “Star Wars”.

This wonderful exhibit not display costumes and props from all six Star Wars films but it blends them with current technologies. Besides just viewing the exhibit you can also go one step further and get the inside world with many kiosks setup throughout with extensive video interviews with the filmmakers and even scientists and engineers. Even being such a big fan myself, I actually learned a lot of things that I never knew because of this.  To be honest it is a bit overwhelming when you realize that you are literally standing right next to these props that really have been used on screen for these films.  Of course, who doesn’t want to see the real Luke Skywalker’s Landspeeder, Yoda puppet and Han Solo costume, just to name a few of the amazing sites included.

One aspect, I would like to focus on with this exhibit is the presentation from the Orlando Science Center.  They really gave this exhibit a lot of respect and care.  When you walk into the doors, you are put into a room with black sheets hanging from the ceiling.  Then like the black sea, the curtain part like a theater and you are revealed to see the original and breath-taking Millennium Falcon.  It was very well presented and a great way to start this tour.  I also loved the complete atmosphere in the exhibit.  The lights were dim but the props where perfectly lit.  You are not allowed to use flash photography in the exhibit but you honestly do not even need it in order to get that perfect shot.  It is setup so well that each item on display is surrounded by a wonderful halo of light.

As much as I love “Star Wars”, I love the science behind. I mean who doesn’t spaceships and mechanical robots, just to start with? But like I said the exhibit doesn’t stop at displaying some amazing props from the “Star Wars” saga, it delivers much more.  There are a lot of “real-life” aspects with that gives its visitors some real hands-on action. There are two Engineering Design Labs, where you can actually build and and play with your own speeders and robots.  Does it get cooler than that? This is also not just for kids, there plenty of fun to have for us big kids as well! There is also a simulated ride where you can see what it is like to actually drive your own speeder, this was very cool!

The price of admission to the Orlando Science Center will run you a little steep $27 dollars per person, but it will also include entry into “Star Wars: Where Science Meets Imagination”.  I have to say as much as I liked it, I feel like it is a little pricey especially for a large groups of families. If you are a hardcore fan though, you will leave this exhibit very satisfied and believing you still got your money’s worth for sure. So with all that being said…Orlando, you still have two months left to experience this great exhibit before it continues its museum tour.  It’s next stop will be at the Indiana State Museum, Indianapolis, IN from Saturday, May 25th – Monday, September 2nd.  I would highly recommend catching this.

For more information on the exhibit, please visit: www.mos.org/star-wars.

All photos are courtesy of the Orlando Science Center: