February 21, 2013 – Tonight’s Parks and Recreation will see the wedding of Leslie Knope (Amy Poehler) and Ben Wyatt (Adam Scott) in a spontaneous ceremony put on by the Pawnee Parks department. The two stars spoke together, along with series Executive Producer and Writer, Mike Schur about the special occasion as well as Leslie and Ben’s relationship throughout the series.

Back in October, Ben Wyatt surprised viewers with his impromptu proposal to Leslie in one of Schur’s favorite moments of the series so far:

Mike Schur: “I like the proposal the most of the things that have actually aired because I’m of the belief that the most powerful weapon we have in tv these days after sixty years of sitcoms is surprise and that has been our goal with every relationship really and with every non-romantic story we tell on the show we just try to always be surprising to the audience. And that was the idea, we were not going to have the proposal come in the season premiere or in you know, November sweeps or you know, Christmas or whatever. We’re going to do it at a time where it just feels natural and right and that kind of takes people by surprise. That was the plan with the proposal and I think it worked.” 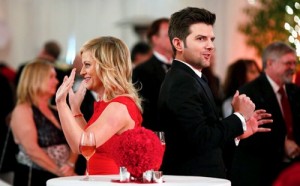 Everyone has to Chip in

Originally planned to take place in May, Ben’s sudden decision to hold the wedding instead at tonight’s Parks Department gala puts the entire cast to work:

Schur: “They basically have two hours to throw it together. So everybody kind of has a role to play. Tom Haverford becomes the officiant and has to get ordained online in like an hour and Donna plays a role in that for the first time we’re going to feature her beautiful and professionally trained singing voice…In order to pull this thing off, in classic Parks and Rec fashion, everyone has to chip in.

Schur: “The wedding is really about Leslie and Ben and everyone sort of gets that. So Tom is not—Tom has a desire to kind of shine at the wedding, as he always does in any social situation that he’s in. But it’s not about ladies. It’s about him wanting to be a star at the wedding.”

Did Leslie miss having a big production wedding?

Amy Poehler: “Leslie…is a modern woman. So it’s not like she has these weird fantasies about marriage or of weddings necessarily. So she’s kind of a combination of her liking to be in control. And what’s cool about that moment for both Ben and Leslie—because they tend to like to control things—is that they kind of throw things up in the air.”

Ben Wyatt as The One

Leslie Knope has dated an assortment of men throughout the series from Louis CK to Justin Theroux, but it became clear to everyone that Adam Scott as Ben Wyatt would be the one to wind up tying the knot with Knope.

Adam Scott: “We thought that it might be—Leslie and Ben might be a couple at some point but I think it was sort of a wait-and-see sort of thing. Because if we got together and didn’t quite click as a relationship…I sort of got the sense that they were gonna try that out and see if it works and if it didn’t maybe find something else for me to do.” 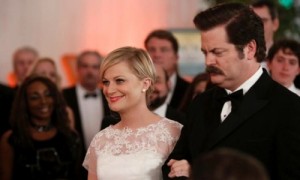 Schur: “The plan was always that this was a love interest and a long-term love interest. Our initial idea for Leslie was that she was gonna have a series of relationships with different men, different kinds of men over the course of the show and that she would sort of learn something different from each of them…She learned something from Mark Brendenowicz [Paul Schneider], she learned something from Louis CK’s character, she learned something from Justin Theroux and we were kind of like oh, Adam Scott, she’ll date him for a while and she’ll learn something from him. It was certainly the plan to have him be the love interest…The first episode—in the Master Plan episode—they have a conversation in a bar and I wrote this thing into it where Ben says to her very casually ‘You want to run for office someday, right?’ and she says ‘Yeah, how did you know?’ and he just sort of blows past it. I mean he’s just kind of got her number, he just kind of gets her. He understands her and what her goals are. And the second episode that we had which was the finale that year called Freddy Spagetti, they have a conversation and Leslie smiles at him and walks off and there’s a shot of Adam looking after Leslie with a smile on his face and as soon as I saw that I kind of realized that not only were they going to get together but they were never going to break up. It became really clear in that moment that this was it.”

Pawnee after the wedding

As always with Parks and Recreation, work goes on in Pawnee right alongside the romantic plots.

Schur:“In the second episode [tonight’s 9-9:30 half of the hour]… the cold open of that episode is Leslie and Ben coming back from their Honeymoon and just sort of talking about how much fun they had on their Honeymoon but the episode is just a regular episode of Parks and Rec and Leslie and Ben are in the same story. Ben is starting a new job and it’s the first day of work and he’s sort of thrown into this new challenge of his new job and Leslie has an event that she’s planning for which is sort of a correspondent’s type of event where the politicians roast each other and stuff.

And so I think you’ll see right away that there’s sort of a blue print going forward that yea, they’re married now but you know, they also have other aspects of their lives that are very important to them and so I hope and very much feel like that will be the thing that keeps it from feeling like the ‘magic is gone.’”

Parks and Recreation airs every Thursday at 8:30pm on NBC.