Mike Watt is probably best known as the bassist for the influential 80’s punk band Minutemen.  Following the death of the group’s lead singer D. Boon in 1985 Watt went on to form and play with other seminal rock groups such as Firehose, Dos and more recently The Stooges. Watt’s latest project Il Sogno Del Marinaio is a 3 piece Avant-garde group that bends and blends musical genres and instrumentation. Media Mikes had the pleasure of speaking with Mike recently about the group’s new album and their upcoming 53 date tour.

Adam Lawton: Can you give us some back ground on Il Sogno Del Marinaio?
Mike Watt: I’m a bit partial to trio’s and this new group is a very traditional trio however lately things been a bit different. With Missingmen and Black Gang I put those groups together to play my opera’s. I asked the guys who made up those groups if they would take direction to help me realize that piece of work. Then for 125 months I helped the Stooges which were the opposite as they were the ones telling me what needed to be done. With Il Sogno Del Marinaio its closer to what I was doing with D. Boon in Minutemen as there is a lot more collaboration going on. The band’s name means sailors dream and the other two guys in the group Stefano Pilia and Andrea Belfi are from Italy. They are about 20 years younger than me so I am like their student. How we came together was a total accident. I was in Italy doing some shows with Secondman and the promoter put Stefano with us to help navigate the area. About 4 or 5 years later I get an email out of the blue from Stefano asking me to come play some shows with him and a friend of his (Andrea Belfi). I didn’t even know Stefano was a musician. I knew he knew about the music scene but come to find out both him and Andrea are schooled musicians whose styles come from Avant-garde. Though our styles are different we share the same punk roots. That’s part of the reason why I feel like I am their student as I am learning a new style of music from them. It’s going to be great to bring these guys over here to the states and show them the landscape and expose American listeners to their playing. Here in the states you don’t get to hear a lot of Italian artists so this run of shows is going to be really special.

AL: The tour is very fast paced in that you are doing 53 shows in 53 days. Can you tell us about that?
MW: Coming from groups like the Minutemen who toured with bands like Black Flag doing shows like this is a tradition. It’s not really too wild or crazy as this is what I have always done. When Stefano asked me to first play with them we had to get the material together. My idea was to do some more shows together so the guys put together a small mini tour of 6 gigs.  Between the 3rd and 4th gig we made our first album. This will actually be our second tour for our second album. The guys know it will be a lot of work but they don’t see the B in burden they see the O in opportunity. If you really want to get out there and do a tour right you have to hit all the places not just the big ones.

AL: Can you tell us about the new album?
MW: This second album is much different from the first. When we did the first album we had just those three gigs together and that was it. The album was informed by just knowing each other and that was it. This new album is definitely formed from a different place. I think it’s important to make something different each time. Albums are almost like diary entries as they almost document what was going on during the time it was made. We worked with Bruno Germano in Bologna at a studio that was built inside a barn. It was such a cool place that the whole time I was there I never left it. Bruno has a more natural direction that doesn’t use a lot of effects to capture the moment. Bruno also brought a fourth man perspective which made the sound much more different. Bruno also was the guy who mixed the album. We did the album in about 8 days and I think it turned out really well. I got put in some interesting places and I thank the guys for that.

AL: Was there ever a time you were asked to step too far out of your comfort zone?
MW: The first thing was that those guys are trained musicians in other forms of playing than just rock and roll. They are capable of playing all these different time signatures very naturally. For me it was a bit harder to go back and forth from 4/4 to a more intricate signature. These guys have an expertise that is more accomplished. I had a similar problem when I worked on the song I did with Miku which was written in 7. In fact the drummer had to pound the rhythm for that out on my back. (Laughs) I got it but I needed a little help. It’s not bad to do things like this though because I think that if you don’t try shit and you always have the training wheels on then I feel it cheats things a little bit. You should always give things a try even if they may frustrate you a little bit at first.

AL: Was the song writing a collective effort or was there one guy who wrote a majority of the music?
MW: We all brought in our own tunes. I think I brought in 4 or 5 things. I didn’t honesty think that we would do all of what I brought in but when it was all said and 4 of my songs made it on the album. We did 12 songs all together. We all have distinctive ways of writing. I write on the bass on purpose and I don’t write anyone else’s parts. Andrea writes for everyone and Stefano writes only the guitar. We all take different approaches to composition. I come in with the bass lines and then give them to other guys to do their thing. I will change structure based on what the other person comes up with.  Stefano likes to put out guitar licks and then watches for what we do. He then will develop a melody right there in the moment. Andrea’s like to map everything out via Midi demos. We did a lot of work right there in the studio. Prior to the sessions starting we all did our homework and were prepared.

AL: Besides this album coming out in August what other releases do you have planned for this year?
MW: I just had an album come out titled “CUZ”. We started that fucker 6 years ago and just by coincidence it came out right now. That’s the problem with doing a lot of projects as things start to overlap yet you want to make sure that you give each project the proper respect. This “CUZ” album was the first time I ever made an album in England. Recording there was a bit different. We did a couple days of jamming and then parts were pulled from those sessions to make songs from. This is a very strange yet interesting album. This is something they want to try and do live which is pretty trippy to think about.

AL: Do you find it hard splitting time between multiple projects?
MW: (Laughs) Look what happened with Il Sogno Del Marinaio. I could even release the record because we couldn’t tour for three years! When I am working with a group I work with them like it is my only band. You don’t want to give a half ass effort. I go all the way with everything so I have to dedicate my time to each project. It’s hard to be in more than one place so I have to plan further ahead than I used to. This tour coming up I started booking back in January. If you want to give people a good shot of what you can do for them then you have to be planning ahead. I just did some shows with Big Walnuts Yonder that have been in the works for a couple years now. Those guys have some really crazy schedules. 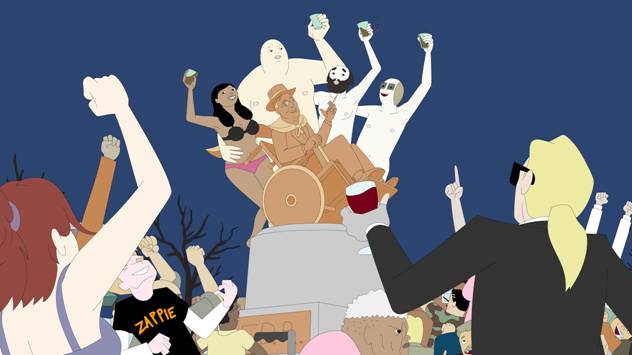 Did you catch the premiere of “China, IL”, a new animated series on Adult Swim? An all new epsiode “Dean vs Mayor” premieres Sunday, Oct. 9 at midnight (ET, PT) on Adult Swim. Check it out it rules!

Show description:
Frank and Steve Smith are brothers who teach in the history department of a state university in China, IL. They also happen to be legends in their own minds who will often sacrifice facts, lessons and syllabi for the sake of being awesome. China, IL, created by Brad Neely, is a reverse Animal House where the teachers are crazy and the students just want to learn.