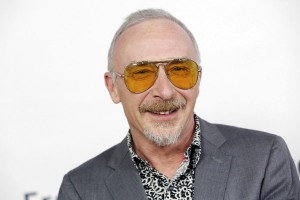 “This is 40?”  How about This is 62.  While most people his age are thinking about retirement musician Graham Parker is still going strong.

Inspired by his home country’s  Beatles, Parker and some friends formed their first band when he was 13.  After traveling around Europe and playing the occasional gig between jobs he returned to England and began work as a session musician.  In 1975 he formed the band he is most associated with, the Rumour.  Five years later the band broke up but Parker continued as a solo artist, becoming one of the most influential singer/songwriters of his generation.  In 2012 he reunited with the Rumour to produce the album “Three Chords Good.”  The album is classic Parker…great melodies and even greater lyrics (personal favorite:  “Snake Oil Capital of the World”).  In 2012 Parker also added “actor” to his resume’ when he appeared as himself in Judd Apatow’s comedy “This is 40.”  While promoting the upcoming DVD release of the film Parker took time out to speak with Media Mikes about his music, his inspirations and being back with the Rumour.

MIKE SMITH:  How did you become involved with “This is 40?”
GRAHAM PARKER:  Judd (Apatow) came looking for me, actually.  The timing of it….I had just reformed with my first band, the Rumor, to do an album.  We hadn’t recorded it yet but we had it arranged and it wasn’t more than a week or so later that Judd got a hold of my people, as it were, my publishing company people.  I met with him very quickly after that in New York City.  And he talked to me about this part of the plot line about an independent record label…that I would be the kind of act that would get signed to this label.  He elaborated a little bit on that idea…not a great deal…I think he was checking me out, you know?  And a week later he was back on the phone saying “Let’s do all this stuff, man.  I want you in it.”  He brought the Rumor in and we did a two-day shoot with them and then a few days with me doing various things.

MS:  Were you a fan of his films before he contacted you?
GP:  Back in 2001 I heard that one of my songs was going to be used on a television show called 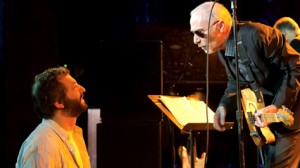 “Undeclared.” (NOTE:  the show was created by Apatow)  I entirely missed out on watching it when it aired so I watched the episode.  And I thought “that is a really good show…it’s a great show.”  So I watched a few more episodes on DVD.  Then someone told me I had to see “Freaks and Geeks.”  So I watched that.  And both of those productions were absolutely fabulous.  And from then on Judd was on the map.  I’ve seen most of his films.  “Knocked Up” and “40 Year Old Virgin” stood out…they were such blockbusters you couldn’t get away from them.  But I could tell he was a class filmmaker doing unique kinds of stuff.

MS:  I gave a re-listen to “Three Chords Good” yesterday to prepare for our talk.  After almost forty years of music you continue to be one of the most brilliant lyricists.  Is there anything special that inspires your music?
GP:  It’s hard to tell anymore (laughs).  I still seem to have this drive to cover up my last lot of mistakes as it were.  About six months after I do an album I start thinking back and thinking “I’ve got to do better  than that!”  And I start itching to write songs and clear the deck again.  Clear the deck…do it again…get back on the horse.  Do it all differently.  It just kicks in.  More that than really just having a great deal to say.  I think you have the most to say when you’re under thirty…when all of those interesting synapses are firing, you know?  Things are different now.  I’m not trying to destroy the world or blow people’s minds.  I’m just trying to make very interesting songs and just keep that ball rolling.  And for whatever reason that feeling hasn’t worn off yet, which is just a lucky accident I think.  Unfortunately I’m driven.  The stuff keeps coming.  As soon as we finished the new album I wrote a song and I thought “this is a good start.”  But then I had to stop myself because the album had to be held up for so long…obviously it was a no-brainer to tie it in with the movie’s release.  It was held up for a year.  And in that time I could have written another whole album but I stopped myself because I knew I would not be too excited about promoting THIS record if I’ve got a whole album’s worth of songs in the bag.  I stopped but now I’m back at it.  I’m putting together a few songs and again preparing to do a little tour with the Rumor to coincide with the DVD release. 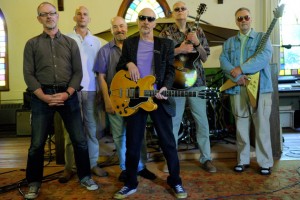 MS:  With all of the technology available today pretty much anyone can have a recording studio in their home.  Do you think that’s a plus for the music industry…the ability to get so many different sounds out there?
GP:  The days of acts thinking they’re going to sell enough music to make a living are gone, really.  Very few break through into that area….a lot of hard copy sales or download sales.  I do think it’s good that people that might only have a modest chance can do it themselves at home for cheap.  I’m not a techie…I don’t have a lot of studio gear.  I have an Mp3 player that I record on.  I’ve got Garage Band on my computer but I don’t use it.  I’m lucky enough to always be able to get a gig (laughs).  But I do think it’s good that everybody can get a chance to make music.

MS:  After more than three decades you’re back on the road with the Rumor.  Was there any rust when you first got together or was it as if you’d never parted?
GP:  I can’t say there was any rust at all.  We just got right back into it.  It was very heartwarming and encouraging, really, because so much time had passed.  Once we started playing…there’s a symbiosis between us that just locks in.  To illustrate that, there are three of us playing guitar.  I don’t need to play guitar when I’ve got two great guitarists.  There are some songs where I stop playing, thinking I can do it without playing the guitar, and they tell me that my guitar is intracal to it.  And it is.  There are some songs where the three of us just lock in.  It’s a pretty amazing thing.  That just happened instantly.  We recorded the record in nine days.  It was basically done except for a few overdubs and backing vocals.  So that shows you the kind of form we were in.